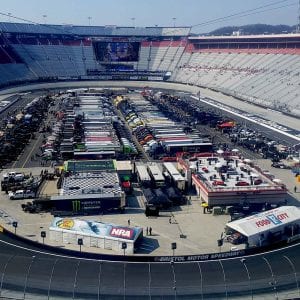 The Monster Energy NASCAR Cup Series makes its annual Spring stop at Bristol Motor Speedway this weekend. The Food City 500 is scheduled to take the green flag Sunday afternoon, the 15th, shortly after 2:00 pm. The current forecast for race day is cloudy with rain probable. Today, it’s a beautiful 80-degrees with plenty of sunshine and a comfortable breeze.

The first practice for the Cup cars prepped the drivers for today’s qualifying session scheduled for 4:45 this evening. Ryan Blaney(12) and Erik Jones(20) posted the fastest laps at 129.877. Kurt Busch(41) ran third fastest, Kyle Busch(18) fourth, and Kyle Larson filled out the top 5.

In the big news of the day, Kevin Harvick(4) hit the wall. It appeared that something may have broke on the car or a tire issue developed. Entering turn three the car took off towards the outside wall making hard impact. The video shows something coming out from beneath the car as it makes its way up the track.

This year’s 3-time winner will be switching to a backup car as they towed his number 4 Fusion back to his team trailer. Harvick’s fastest lap, 127.284, was only good enough for 25th on the speed chart.

Kevin Harvick, driver of the No. 4 Busch Beer Ford Fusion, was involved in a practice accident today at Bristol Motor Speedway and will be forced to a backup car for Sunday’s Monster Energy NASCAR Cup Series race.

KEVIN HARVICK, No. 4 Busch Beer Ford Fusion – ANY FURTHER DETAILS ON WHAT HAPPENED?  “Something obviously either came off or broke in the front suspension.  It looks more like the right-front, to tell you the truth.  It definitely wasn’t a tire failure or anything like that, but just going in the corner as soon as I let off the gas it just hung a right, so it’s unfortunate for our Busch Beer/Jimmy John’s Ford, but we’ll get another one out and do it again.”

Top to bottom the 39 cars entered were separated by less than a second. Speeds varied by only 8 mph. Other top drivers and their position on the speed chart included the following.

Qualifying for the Food City 500 at Bristol Motor Speedway was supposed to start at 4:45 pm. The only thing that started on time was the 15-minute clock. Most teams opted to wait as late as possible in the hopes the track would cool from the hot afternoon sun. With the first round of eliminations, 39 cars were set to take the track. It was bound to be crowded as the time wound down. Denny Hamlin(11) was the first of the pole contenders to hit the track. He exited pit road with six minutes left on the countdown clock.

With a little over three minutes to go, pit road began to empty. Still, with two minutes left there were 16 cars that had not recorded a time. Kyle Busch posted the fastest lap at 128.960. Kurt Busch was second fastest at 128.382.

Notables eliminated in round one, Denny Hamlin, Martin Truex Jr., and Kevin Harvick. Harvick did not take to the track as his crew continued to prep his backup car.

The second session? Same as the first with driver’s waiting as late as possible. Noting that Hamlin went out early and failed to advance, Kyle Larson was first on the track with 2:30 left on the clock. As the timer clicked down, everyone else waiting began to move out at the 1:45 mark.

Here is the list of cars eliminated in Round 2.

With 12 cars remaining, track space will not be a problem for those seeking the two front row spots. With passing difficult on the tight corners at Bristol, track position is important. Every driver wants to start as close to the front as possible. All 12 cars were on the track for the final minute of Round 3.

Kyle Busch edged his brother Kurt by 2/1,000 of a second to win the pole, running 128.822 miles per hour. This is the third time in their career they have shared the front row at the start of a race.

Final results for Round 3.

Check Back this Weekend for More Pictures from Bristol Motor Speedway. Live NASCAR Coverage from The Lasco Press.