As we reported last month Fenton High School grad Melissa Miller is competing in this season’s edition of the reality TV show Naked and Afraid XL. The All-Star edition of the show brings back 13 contestants that competed in 21-day challenges during previous seasons. 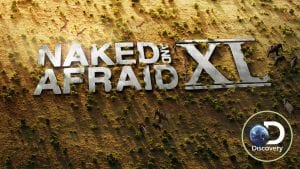 The XL edition extends the challenge to 40 days. Four teams of three are dropped into separate locations in Africa’s Selati River Basin. An area avoided by local tribes due to its reputation for being the home of aggressive lions. Teams are separated approximately 2-3 miles apart. Unkown to the 12 contestants a 13th individual is also competing on his own.

VIEWER/READER ALERT: Yes they are totally naked. The show is a video editor’s nightmare as frontal nudity is blurred in the delicate spots. However, if you tune in expect to see naked bottoms on camera shots taken from behind. Apparently, a bare behind is an acceptable view for the 10:00 pm time slot on cable television. Videos in the article are clips from the actual show and contain nudity.

Teams are composed of a mixture of men and women. Two men, one woman. Two women, one man. Three men, and three women. Melissa is on the team with two other women. Their location is an area known as the Noja Cliffs. Melissa’s teammates are Kaila and Lindsey.

The primary focus of their first day in the wild is to build a boma. A collection of thorn bushes arranged in a perimeter to provide protection from wild predators. The girls select a location with a high bank at their back and only need to close in three sides to have an effective boma constructed.

Their work is interrupted by the arrival of a local game officer. She brings news that sends a chill through the team. The game officer reports a gruesome discover less than a half mile away from their camp. The bodies of two poachers killed by lions. She encourages the women to complete their boma prior to dark and make sure it’s secure.

After a safe night, Melissa and her team wake up and explore the area around their boma. They discover a small pond that is teeming with fish. But, they have no fishing gear. Wading into the water they attempt to catch the fish by hand, a fruitless effort. They come out of the water looking like mud wrestlers.

Melissa finds a warthog carcass filled with maggots. She drags it to the waterhole in an attempt to use it as bait. Again, with no success.  They return the next day with their bow and arrow. As Kaila and Lindsey get in the water and herd the fish towards shore Melissa shows her skill with the bow. They return to their camp with enough fish for a satisfying meal.

While the girl’s team excels, other’s are beginning to have issues. Clarence from the two men, one woman team is stung by a scorpion. While he battles through the pain, his blood pressure spikes. Clarence is light-headed and has trouble standing. Fearing the potential for a stroke medics remove him from the competition. 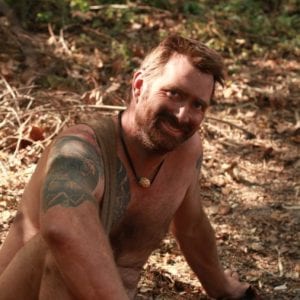 Jeremy, a member of the all-male team suffers from constant nausea. His weak stomach presents a problem for his continued participation. Melanie from the two women, one man team has sun poisoning the result of a serious sunburn. She is unable to contribute to the team having to stay out of the sun during daylight hours. They are yet to obtain any food.

More catfish for Melissa and her team keep spirits high in their camp. A wind-shift signals storms are approaching the river basin. The competitors appear poorly prepared to face a major storm. Overnight the temperature drops 48 degrees and the rain pelts the area all night long combined with flashes of lightning.

Morning dawns dry, but cool and cloudy. The competitors assess their situations. Melissa’s camp suffered a landslide on the sand cliffs that comprise a border of their boma. They decide moving camp is a necessity. The girls locate a large downed tree and use it as the base of their boma.

The team of two women and one man set out to find more a more suitable camp and hopefully a food source. They make contact with the three-man team and combine to improve their chances of lasting the 40 days. Unfortunately, after getting his two female partners safely to another group, Duck succumbs to missing his family and taps out on Day 7.

A hailstorm hits the basin on Day 8, bringing with it a cold front and more torment for the competitors. Melissa’s team is forced back to the sand cliffs to try and stay dry. After the storm, they work to improve the protection of their boma.

The catfish pond is shrinking, but the girls are finding it harder to arrow the fish. The catfish seem more aware of their presence and stay deeper in the pond.

Jeremy cannot overcome his stomach illness and is forced to tap out on Day 8.

The combined teams collect a bunch of frogs and fry up a feast. The dinner turns bad when contestants begin to get a tingling sensation in their mouths. Most of the meal is vomited up and frogs are removed from the menu.

Shane and Lacy are having compatibility problems since the departure of Clarence. During a hunting trip, Lacy encounters the combined team and they return to camp with her. The arrival of the group does little to improve the conflict.

Shane goes out exploring and finds a large catfish pool. He convinces the combined team to go to the pool to work as a team catching them. They have the same success as the girl’s team, no luck. They do manage to grab an eel and it produces a good meal for the six team members.

Melanie continues to battle sun poisoning and intermittent nausea. Naked she is unable to get relief from the constant sun and sunburn is a daily occurrence. Unable to fight through the illness she taps out on Day 18.

The lack of protein is weakening both teams. The combined team find some fig trees and battle the baboons to get some subsistence, but they need meat. Everyone is too weak to eat. Melissa and her teammates take to hunting in an effort to provide another source of food for their group.

Melissa, Kaila, and Lindsey are hanging tough halfway through the 40-day challenge. They must find a consistent source of protein. The combined team, despite their numbers, are struggling.

Look to the Lasco Press to follow Melissa’s adventures in Africa. As the contestants transition into the final 20 days, double their previous episodes, things are sure to get wild. We’ll keep you informed of the conclusion.