Despite a 2-hour and 15-minute rain delay. Michigan International Speedway dried up enough to put a green flag to the FireKeepers Casino 400. At a race track where track position is so important, going to the rear of the field is a major penalty. Kyle Busch(18), Denny Hamlin(11), and Erik Jones(20), three of the four drivers from Joe Gibbs Racing were sent to the rear of the field for inspection violations.

All three qualified in the top 10, violations of the shape of the splitter brought on the penalty. Leaving the front of the field solely in the hands of Ford Performance drivers. Pole sitter Kurt Busch(41) moved to the early lead. As Kevin Harvick(4) pushed him further out front, the two began to pull away from the field.

Stages at MIS are 60 laps in length. That’s important because the race becomes official after the completion of Stage 2 or 120 of the 200 laps. Saturday’s NASCAR Xfinity Series race was stopped 34 laps short of the scheduled 125 laps. Officials do not expect the Monster Energy NASCAR Cup Series race to go the total distance. The threat of rain stayed everpresent through the race.

Because of the amount of rain dumped on the racetrack, NASCAR mandated a competition caution on lap 25. The entire field opted to pit for tires and fuel. Kurt Busch and Harvick exited still in first and second. On the restart, Brad Keselowski(2) passed Harvick. However, the result was the same. A two-car breakaway for the lead.

On Lap 36, Darrell Wallace Jr.(43) and David Ragan(38) got the aero on their cars out of sorts and spun off turn 2. Ragan got the worse of it. His car hit the wall. Wallace escaped with minor damage and was able to continue.

Back to green and Keselowski’s Team Penske teammate, Ryan Blaney(12), follows Kurt  Busch as they try and escape the rest of the field. On Lap 40 Kyle Busch(18), who started at the rear of the field, worked his way into the top 10.

Blaney, showing a good combination of horsepower and handling, took the lead from Busch on lap 47. Kenseth spun out of Turn 2 on lap 56 setting up a 1-lap dash to the green and white checkered flag. Blaney held on for the Stage win.

The front of the field jumbled up on the Stage ending caution. Kasey Kahne(95) held the top spot. On the drop of the green flag, trouble flared up before they could complete a lap. Daniel Suarez(19) spun in Turn 4 bringing out the caution again.

On the restart Stewart-Haas Racing teammates Harvick and Clint Bowyer(14) moved out front. Followed by Penske teammates Keselowski and Blaney. Logano and Kurt Busch joined in to make it a six-car Blue Oval train at the front of the pack.

Trouble for the Three-Time Winner

Kyle Larson, the winner of the last 3 Cup races at MIS, spun off Turn 4 on lap 85. The caution allowed the field to pit for enough gas to complete the stage. Some drivers took tires, some did not, as track position is so important. Especially given the rain threat.

Paul Menard(21) stayed out and assumed the lead. Harvick, Kurt Busch, Bowyer, and Kyle Busch followed. On the restart, Harvick easily slid into the lead. Menard, Bowyer, Kurt Busch, and Kyle Busch followed. With 95 laps complete, 25 more are required to make it an official race. Teams are told by NASCAR that rain may occur within the next 15 minutes.

The 100-lap mark went up on the scoreboard at 6:12 pm. The skies dropped lower darkening the view around the speedway. However, they do get to the end of Stage 2 making the race official.

A 1-2-3 finish for the Fords of Stewart-Haas Racing. Six Fords in the top 10, you can hear the shouts from the Dearborn contingent above the noise of the engines.

Back to green flag racing and the battle for the lead between Harvick and Bowyer produced an interesting result. Bowyer moved to the front and held off Harvick through 2 laps of side-by-side racing.

Kasey Kahne hit the wall and the yellow came out with Bowyer it the lead. Then the rain hit. And Bower had his 2nd win of the year, also the 7th win of 2018 for Stewart-Haas Racing.

Next week the Cup Series takes a weekend break. Returning the following week to Sonoma for the 1st road course race of the year.

Results of the 2018 Firekeepers Casino 400 at Michigan International Speedway 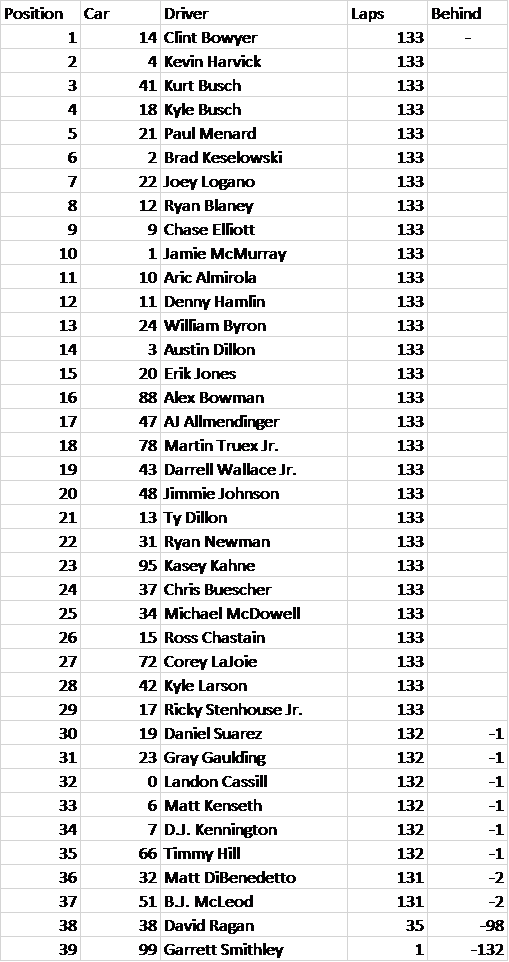