Blaney led for 11 laps and then Harvick took over. However with 7 laps to go in 50 laps of Stage 1, Martin Truex Jr.(78) passed Harvick and held on for the Stage win. Not many times this year has anyone run down Harvick and passed him under green flag conditions.

Joey Logano(22) pitted early in Stage 1 and should have had enough fuel to make it to lap 50. Unfortunately, Logano’s crew failed to get his car completely full of fuel and he ran out with 1 lap to go. Pitting after the closing of pit road at the end of the stage. Logano went 1 lap down to the leaders. Then he had to start at the end of the longest line on the restart, his penalty for pitting illegally.

During the Stage ending pitstops, Truex’s team did not have a good one and he came out in the 14th position to begin Stage 2. The Fords of Brad Keselowski(2), Harvick, and Blaney were the first off pit road. Harvick took the lead heading into turn 1 and immediately started to pull away.

Other than 4 laps when pit stops cycled through Harvick led the entirety of Stage 2. Truex battled his way back to finish 4th in Stage 2 after his disaster of a pit stop.

During the Stage ending caution, Truex’s team performed up to their standard and got the 78 car out in 4th. Harvick was first off pit road. Followed by Austin Dillon(3), who only took two tires. Kyle Busch(18) exited in 3rd.

With 60 laps in the Final Stage, only one more pitstop would be required. On the drop of the green Harvick took the lead. As the cars settled out in their position battles, Kyle Busch ran 2nd and Truex took the 3rd spot.

Fitting that the two fastest cars from this year and last season’s champion would fight it out for the win. The running order remained that way until 4th place Kyle Larson(42) tapped the rear bumper of Derrike Cope(99) and spun him out with 36 laps to go.

During the caution, following Cope’s spin, all the leaders pitted. Kyle Busch exited 1st, Harvick in 2nd, Blaney 3rd, and Truex 4th. Barring further cautions, the driver’s made their last pit stop. Everyone has enough fuel to make it to the end.

Debris in the middle of turn 1 brought out the caution with 21 laps to go. Several cars hit the chunk of metal causing NASCAR to throw the caution. All the leaders pitted for fresh tires to make the run to the checkered flag.

Again the running order shifted as cars exited the pits. Truex and Harvick stayed on the track as did Elliott and Larson. Blaney first out of those who pitted, restarts in 5th. Kyle Busch pitted and dropped all the way to 8th place. Likely costing him a shot at the win. The green waved with 17 laps to go.

Denny Hamlin wiggled in Turn 1 with Alex Bowman(88) on his outside. They made contact and Hamlin spun hitting the inside wall. The resulting damage took Hamlin out of the race. Bowman continued with a wrinkled quarter panel.

As the green dropped on the restart more trouble erupted. Logano got into the rear bumper of Erik Jones(20) causing Jones to spin down the front straightaway and into the retaining wall separating the track from the pits.

The Sprint to the Finish

Truex, Larson, Harvick, Kyle Busch and Ryan Blaney lined up for the sprint to the finish. The top two remained the same to the checkered. With Truex easily pulling away for the win. Kyle Busch passed Harvick for 3rd and Brad Keselowski(2) passed Blaney for 5th.

Next week it’s finally here. Michigan International Speedway hosts the Monster Energy NASCAR Cup Series in the FireKeeper’s Casino 400. The Lasco Press will be live on-site to bring you all the action. Tickets remain for the first race of MIS 50th anniversary season, join us in the beautiful Irish Hills.

Results of the Pocono 400 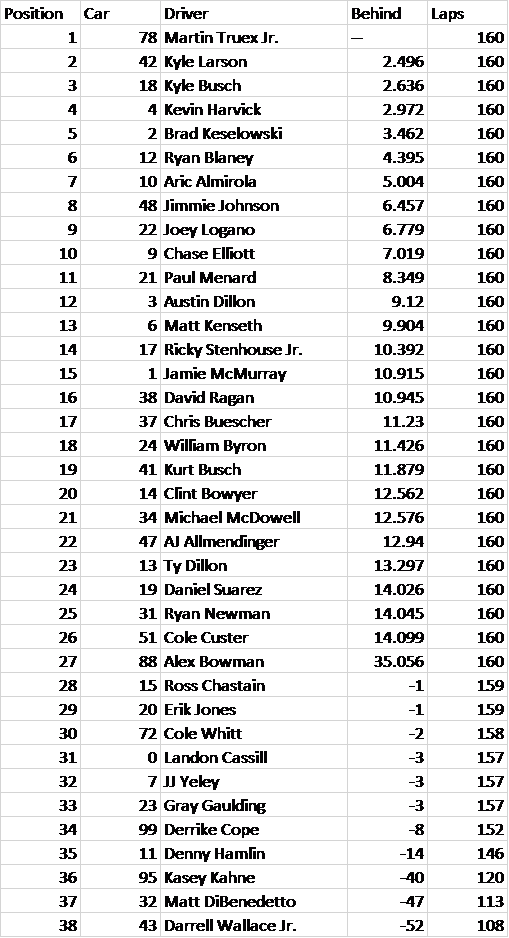 Keselowski Captures Win for Ford at Atlanta, Mustangs 3 of Top...