Media interviews at Michigan International Speedway began Friday morning with defending Cup Series Champion Martin Truex Jr. in the Media Room. Truex has not won at Michigan but said he likes the track. “We have run well here. Hopefully, we can get it done this weekend with a win here.” Truex commented about the tire test he participated in here in the spring. Extra track time is always a benefit. But, Truex said he did not run on the compound that Goodyear selected for the race.

Kyle Larson has won the last three Cup races here at Michigan International Speedway. However, the Chevrolet teams have not fared well on the Cup circuit this year. The new Camaro has proved hard to find the set-up on. Larson said, “He did not feel the Chevrolets were at a disadvantage.” Even going on to say he felt, “Some teams were using it as an excuse for underperforming.”

Given his recent success at the track, Larson was asked if he should be considered one of the favorites for Sunday’s race? “I still fell Harvick, Kyle and Truex are the favorites, but we can be added to the group. Based on how well we have run here. If he makes it four-in-a-row, Larson will tie Bill Elliott’s record for most consecutive wins at the track.

“That Jones Boy,” as iconic NASCAR announcer Ken Squire is fond of calling him, is from nearby Byron, Michigan. Jones has dominated at every level of racing in a career that has seen him rocket from local short tracks to the Cup Circuit. The 2015 NASCAR Camping World Truck Series Champion. He is the first driver to win Rookie of the Year Honors in all three of NASCAR’s premier divisions.

Still, Jones is still looking for his first Cup Series win. But he does not appear concerned that the event is yet to occur. Claire B. Lange from NASCAR XM Satellite Radio called it a “quiet confidence.” Erik admits to some frustration but insists they have to work on doing all the right things. “qualify well, stay up front, and be in a position to capture the win.” It will come.” Wouldn’t it be fun if it came at Michigan?

Another driver who considers Michigan to be his home track. Brad Keselowski has never won a Cup race at MIS. A popular driver to have in the media room, Brad always gives great interviews. He spent a bit of time talking about tires and Goodyear’s decision to bring the tire they did to the track this weekend. He too participated in the spring tire test and felt a different compound would have benefited the competition in this race.

Keselowski also discussed his dislike of restrictor plate competition packages and would not be an advocate of it being used at MIS. According to Brad, “The competition package takes away from the driver’s ability to determine the outcome of his race.”

Ryan Blaney posted the fastest time in opening practice with a speed of 206.617. One of nine drivers to exceed the 200 mph mark. Eight of the fastest cars belonged to Blue Oval drivers. Three-peat winner Kyle Larson managed only the 16th fastest speed, a full 3.5 mph slower than Blaney.

Driver’s drove a combination of race trim and qualifying trim setups. So it will be interesting to see how qualify shakes out and if tomottows practice speeds tell a different story.

The biggest news from Round 1 of Monster Energy NASCAR Cup Series qualifying? Kyle Larson(42), winner of the last three Cup races at MIS did not make it past the first round. He will start 26th on Sunday, his speed 198.999.

Surprise, Kurt Busch(41) grabs the pole with a speed of 203.361. Brad Keselowski(2), who has never won a Cup race at his home track, will start on the front row beside Busch. 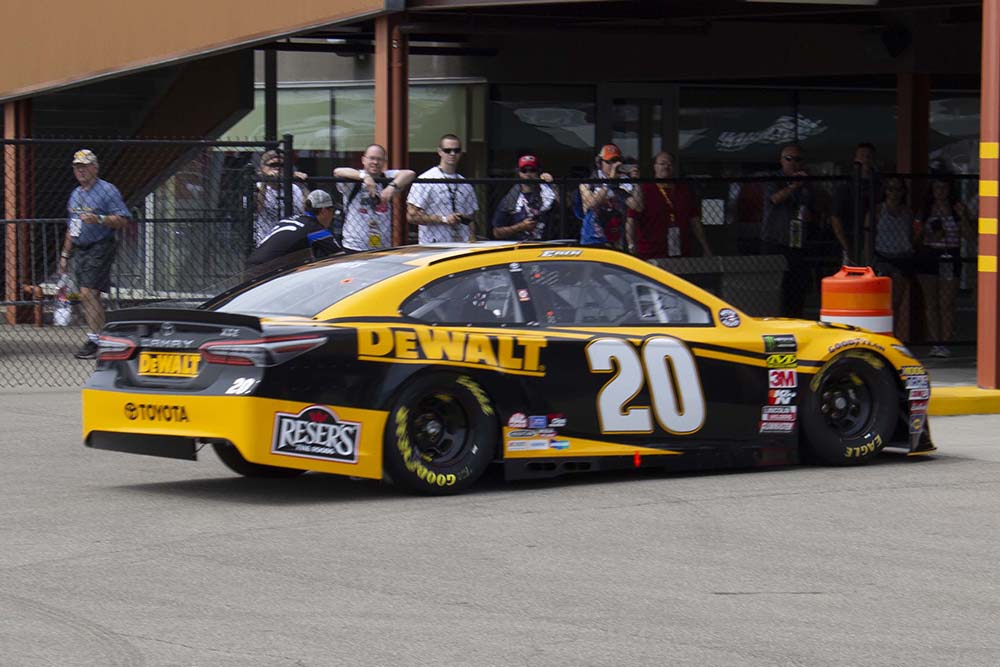 The conclusion of the day’s activities saw the ARCA Drivers compete in the Zomongo 200. Sheldon Creed drove to the win in a race that concluded at 7:18 pm. Almost had to erect lights in Victory Lane for the victory celebration.