Kentucky Speedway’s annual NASCAR tripleheader starts tonight with the Buckle Up in Your Truck 225. Unlike last year when rain plagued the race, there is not a cloud in the sky. Fans are excited to see some fender banging action under the lights on the mile and a half tri-oval. A total of 150 laps make up the 225-mile distance. Stage lengths are 35, 35, and 80 laps.

Justin Haley(24) posted the fastest lap in the 1st practice for the Camping World Truck Series. Racing in the Xfinity series last week at Daytona, Haley crossed the finish line first. Only to be penalized for going below the double yellow line at the bottom of the track while making the pass for the lead.

The 182.076 mph lap was erased in the second practice session. Ben Rhodes(41) ran a lap at 182.834 mph. But, it was Noah Gragson(18) capturing the pole with a blistering lap of 183.955 mph. A new track record for Camping World Trucks at Kentucky. Todd Gilliland(4) starts 2nd, Rhodes takes the green in 3rd. Haley qualified in the 10th position. 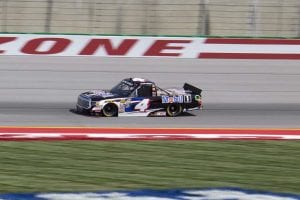 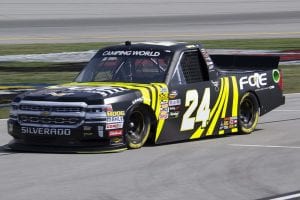 Gragson led the first 32 laps only to be passed by Rhodes in his Ford F-150 3 Laps from the Stage ending green and white checkered. Gragson got caught up in lapped traffic allowing Rhodes to catch and pass him.

In Stage 2 Gragson again led from the drop of the green for the restart. This time, he was able to hold off the challenge from Brandon Jones(51) and Rhodes to take the Stage win. With 80 laps in the final Stage and a fuel window of 54 laps, the final pit stop could decide the race.

After the Stage ending caution, the crew of the 18 made a major adjustment to Gragson truck. They hoped to eliminate the fade the truck experiences after 30 laps. As a result, Gragson started in 13th for the Final Stage. He was not a factor again, failing to overcome the track position disadvantage.

Stewart Friesen(52) and Parker Klingerman(98) battled for the lead over several laps. Friesen won the back and forth contest and pulled out to a comfortable lead. Rhodes drove 3-wide in the tri-oval to move into 2nd and set off to track Friesen down.

Pit stops began on Lap 123, with 2 tires and fuel being the norm. Except for Rhodes, who chose to take fuel only. The gamble worked. As pit stops cycled through Rhodes came out with the lead, Friesen .5 seconds back.

With 10 laps to go Rhodes encountered lapped traffic and Friesen closed to his back bumper. Once the pair passed the back markers and found clean air, Rhodes was able to pull away to a 1-second lead. Concentrating on driving the perfect line Rhodes earned the win for Ford Performance and his sponsor Carolina Nut.