When the Buick Open left Warwick Hills after the 2009 season, many felt the PGA Tour would never return. Grand Blanc and the greater Flint area had lost a part of their soul when tournament ceased to function. The loss of charitable donations the Tour produces for host communities was significant. The negative economic impact on the area already suffering under a sluggish economy was difficult. The loss of tradition and community pride devastating.

The tournament faced a short-term hiatus from 1970-1976 when General Motors(GM) pulled their sponsorship. Local Buick dealers worked to bring the tournament back to life and GM again agreed to sponsor the event after a seven-year absence.

In 2009 GM again pulled the plug on its sponsorship, this time officially killing the event.

The PGA Tour is Back

If anyone doubted the desire of the community to host a golf event, that was dispelled Monday, August 21. Warwick Hills Golf and Country Club held a media day in advance of the tournament on September 10th-16th. New Sponsors, same course, many of the same players, and unbridled optimism.

The PGA Tour Champions featuring golfers 50 years old and over will play in the tournament. Tour Pros Rocco Mediate, Bernhard Langer, Larry Mize, Robert Gamez, David Toms, Mark O’Meara and crowd favorite John Daly have committed to play. The connection with veterans from the glory days of the Buick Open is sure to bring back positive vibes from the fans.

The tournament is dubbed The Ally Challenge presented by McLaren. Representatives from Ally Financial and McLaren Health Care were on hand to discuss their participation. Proceeds from the tournament benefit two organization seeking to provide a positive impact to the youth of Genesee County.

The Community Foundation of Greater Flint and Junior Achievement in Genesee County will benefit from the net income generated by The Ally Challenge. In addition, a separate initiative from The Ally Challenge is Birdies for Charity. Already 40 qualified Michigan 501(c)(3) charities are benefiting through their participation. For more information visit the Birdies for Charity web page.

The golf at Warwick Hills will be just as great as it always has been. The fan experience includes The Fan Zone presented by C&L Ward it offers a variety of golf-themed activities. The McLaren Health and Wellness Pavilion promotes a heart-healthy lifestyle. With information on the awareness and prevention of skin cancer. Check in daily to win prizes.

Members of the United States Armed Forces can visit the Dow Veterans Den, where they will receive premium golf viewing and refreshments.

At 4:00 pm Saturday, McLaren hosts a Kids Clinic on the driving range. This is a Free Family-Friendy activity.

Pro-ams are scheduled for Wednesday and Thursday the 12th & 13th. A few spots remain open on Wednesday, registration is available online.

There are a few perks to being a sports writer like taking a ride with a famous driver around a racetrack or playing golf with a famous pro golfer. Monday the media had a chance to play Warwick Hills. The course is beautiful and immaculate, ready to host the tournament. You can sense the staff almost tingling at the excitement of PGA Golf returning. 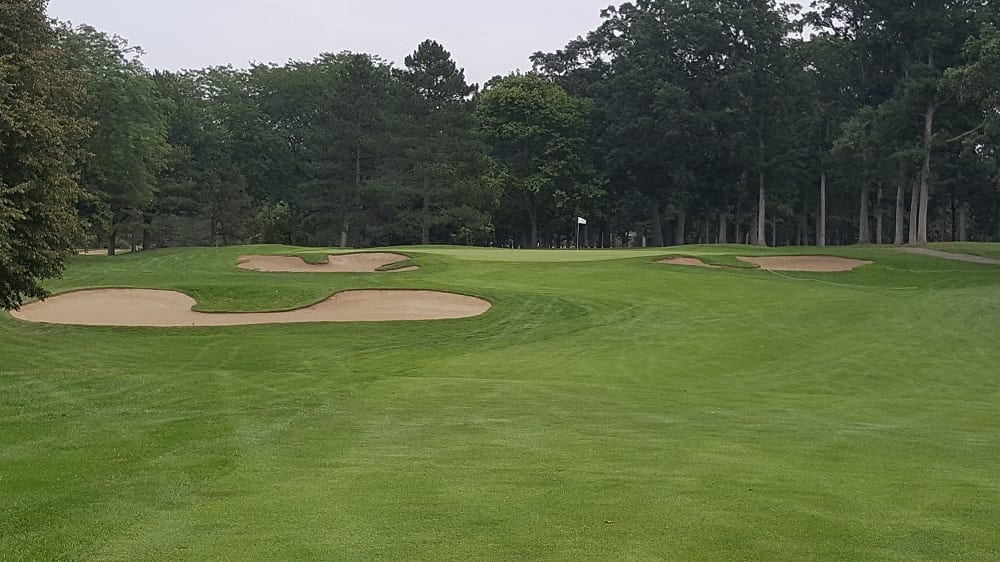 Rocco Mediate was on hand to play a few holes with each of the media foursomes. We were lucky enough to have him show us how to tackle the tricky and famous 17th hole. His shot, Great! Ours, not so good. It must have the imaginary fans cheering in the half-constructed bleachers that got us rattled.

Don’t miss the excitement this tournament is generating. Where else can you go and by a ticket to entertaining golf and benefit children’s charities? Get caught up in the thrill of this event which helps our community in such a positive way.  Estimates of the economic impact to the Grand Blanc and Flint metro area exceed $20 million.

Order your tickets online now at the Ally Challenge Ticket page. Have fun, help the community and celebrate the rebirth of professional tournament golf in Grand Blanc / Flint.

Ally is creating financial services that actually serve. Their teammates are committed to developing award-winning technology and services that make your life easier, products that are never status quo and diverse thinking that inspires new ideas.

They have a fierce commitment to:

McLaren operates Michigan’s largest network of cancer centers and providers, anchored by the Barbara Ann Karmanos Cancer Institute. One of only 49 National Cancer Institute-designated comprehensive cancer centers in the United States. McLaren has 26,000 employees and more than 85,500 network providers. Operations are housed in more than 350 facilities serving Michigan and Indiana.

Fred Funk Leads After Day One of the Ally Challenge