The big news this weekend at the Indianapolis Motor Speedway has been the rain. Events scheduled for Friday and Saturday were completely washed away by Mother Nature. There appears to be a window for the Monster Energy NASCAR Cup Series to run today. But, it a narrow timeframe. The rain sets up an interesting number of scenarios for The Big Machine Vodka 400 at the Brickyard.

With no qualifying, the starting lineup is determined by owner points. The “Big 3” roll off 1-2-3. Kyle Busch(18), Kevin Harvick(4), and Martin Truex Jr.(78). Kasey Kahne(95) is not here this weekend to defend his Brickyard 400 win from last year. Severe dehydration after last week’s Southern 500 forced Kahne to receive medical attention. Doctors suggested he not race this weekend. Regan Smith will fill in for Kahne. Smith has not raced on the Cup circuit in over a year.

No Time on the Track

No practice and qualifying could be a problem for Regan Smith. However, all 40 drivers starting today’s race will face a green racetrack. They will roar off into turn 1 with the set-up they brought to the track. No chance to work on race trim adjustments until pit stops. This could be an advantage for teams that hit on the proper setup based on their previous history at the track.

Jimmie Johnson(48) and Alex Bowman(88) hold the last 2 playoff-qualifying positions. Neither is locked in. If a driver outside the top 16 wins today, one of the two drivers will be knocked out. Johnson holds a 19 point lead over Bowman. That point difference will be something to monitor closely throughout the race.

Matt Dibenedetto(32) sits 30th in the Cup Series standings, 771 points behind leader Kyle Busch(18). Dibenedetto announced this week he will not be back with Go Fas Racing in 2019. He is declaring himself a free agent and is seeking a ride with a more competitive team. Dibenedetto knows he is taking a big risk. He feels this is the point in his career for him to prove he has the skills to compete at the top level in the sport. The question is, do any of the top team owners feel the same way?

The Titan Air Jet Dryers have dried the track. The sky is a heavy gray overcast. But, the radar shows no lingering showers in the area. The race is scheduled for 160 laps. Stages are 50 laps, 50laps, and the final segment 60 laps. So, 100 laps or 250 miles make it an official race. Hopefully, the “vortex effect” of the cars turning laps on the speedway will keep the rain away.

It started as a mist during driver introductions and quickly developed into more rain. For the 3rd straight day, not a single race car turned a lap across the yard of bricks. The jet dryers are logging miles, but are unable to keep up with the constant wave of passing showers.

Another postponement, it will be an Xfinity / Cup doubleheader on Monday. Thankfully my Airbnb host has a vacant room for tonight. Monday has to be the day, I have a golf tournament to cover in Grand Blanc the remainder of the week.

There are still plenty of clouds hanging over Indianapolis this morning. Including the one created by the Colts 34-23 loss to the Bengals yesterday. After leading most of the game the home team gave up 17 points in the 4th quarter to lose their NFL opener.

Fortunately, there is no precipitation falling from the gray skies. It looks like we are going to race.

Green Flag for the Xfinity Drivers

The green flag dropped just after 10:30 am for the NASCAR Xfinity Series Lilly Diabetes 200. Despite the lack of track time, all the drivers successfully navigated the first 10 laps until NASCAR displayed a competition caution. The pit stop allowed teams to evaluate tire wear on the untested race track.

On lap 22 Ty Dillon(X3) spun in Turn 3 and collected the cars of Elliott Sadler(X1) and Austin Cindric(X12). Eliminating 3 of the top contenders for the race win. Sadler, who earlier this year announced his retirement, was racing for the last time at Indy.

With every point valuable in the chase for series and playoff points, Stage points are hotly contested. At the end of Stage one, Allgaier led coming off Turn 4. The front 2 rows went 4 wide across the start-finish line. John Hunter Nemechek won the Stage, Allgaier dropped to 4th.

Daniel Hemric(X21) won Stage 2, without the dramatics of the end of Stage 1. With 40 laps to go tire wear may be a factor in the final segment of the race.

Ryan Preece(X18) was involved in a brutal crash on Lap 78. Spinning out of turn 2 he slid towards the inside wall and slid into the tire barrier destroying the front of his car.

Justin Allgaier returned to the lead in the middle of the final Stage. He could not pull away from teammate Tyler Reddick over the last 20 laps. Allgaier held on for the win. Reddick finished 2nd, Ryan Blaney(X22) 3rd, Chase Elliott(X23) 4th, and Hemric 5th.

The Big Machine Vodka 400 at the Brickyard

Martin Truex(78) was supposed to start 3rd today in the Brickyard 400. His car failed inspection and he will be forced to start from the rear of the field. A huge penalty on a track that it is so difficult to pass cars in front of you.

When the green flag waved, Kyle Busch(18) took the lead with Kevin Harvick(4) right behind. Like the Xfinity race, NASCAR scheduled a competition caution after 10 laps were complete. Harvick decided to pit early hoping for an advantage on the restart. Unfortunately, his team let a tire get loose. He too was penalized and sent to the rear of the field.

Yes, the Brickyard can be unpredictable, 2 of the “Big 3” sent to 40th position for team mistakes. Denny Hamlin(11) opted not to pit under the scheduled caution. While the rest of the field changed tires, Hamlin chose to gamble. It paid off as he took the lead on the restart. 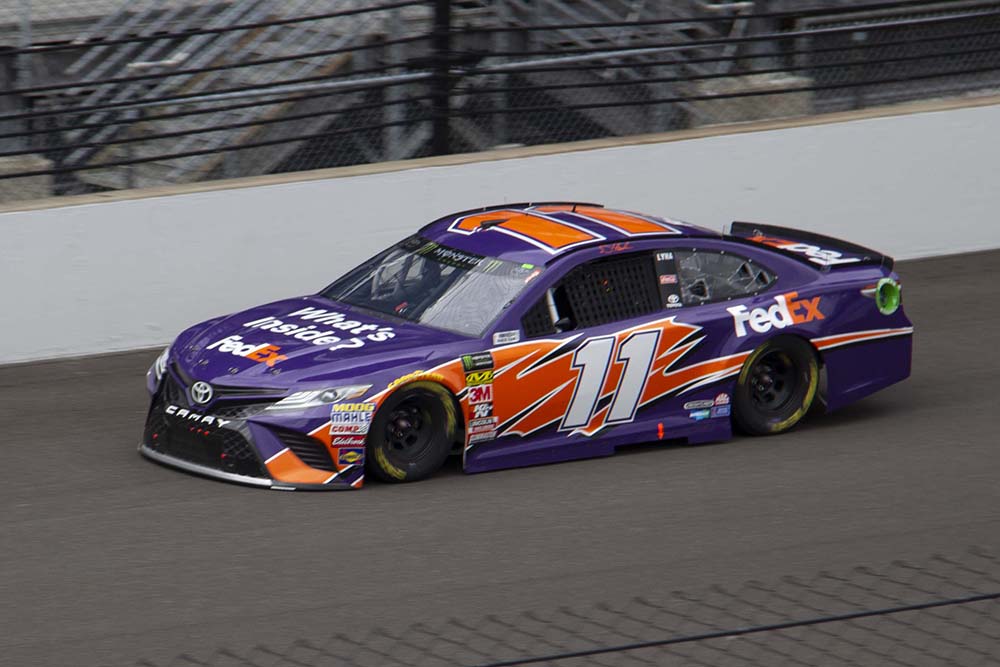 The quick cautions in the first 30 laps scrambled the field. After the restart and the battle for positions settled down, Kurt Busch(41) took the lead. Followed by Clint Bowyer(14), Hamlin, Brad Keselowski(2), and Kyle Busch.

Early Trouble for the Defending Champion

Martin Truex Jr.(78) and his crew got the word last week the Furniture Row Racing team would not compete in 2019. Team owner Barnie Visser said the team lost its sponsorship and he would put no more of his personal money into the effort.

Truex Jr. became the first driver out of the race when his left front brake rotor came apart. Flying parts hit the underside of the hood, destroying the left side. If there had been practice laps it’s possible Truex Jr. would have sensed something wrong and the issue might have been repaired.

Bowyer passed Kurt Busch 5 laps before the end of Stage 1. He held off Busch for the Stage win and the playoff point that goes with it.

Just after going back to green flag racing, Bubba Wallace lost his brakes going into Turn 3. He turned the car into the grass to scrub off speed and then spun back onto the track at the exit of Turn 3. David Starr(51) T-boned Wallace in the left quarter panel taking his car out of the race as well.

Just after going back to green Alex Bowman(88) and AJ Allmendinger(47) got together, also in Turn 3. Sending Allmendinger to the garages and Bowman out of contention. With Bowman crippled, Jimmie Johnson(48) virtually clinches the 15th playoff spot. Bowman remains on the playoff bubble.

It seems everyone is on a different pit stop strategy. Cars are ducking onto pit road in an effort to gain a track position improvement with regular pit stops at the end of Stage 2.

Out of nowhere, Matt Kenseth was working his way to the front. When several cars in front of him pitted with 3 laps to go, he inherited the lead. Take a Stage win anyway you can get it. Especially when it’s a huge boost for a team that has struggled all year.

Kyle Busch finished 24th in Stage 2. Normally that would not be celebrated. However, with the points earned and his worst possible finish in the race taken into consideration. Kyle Busch is the 2018 NASCAR Regular Season Champion.

The closing Stage of the race started with William Byron(24) in the lead and Bowyer in 2nd. Harvick, Hamlin, and Kyle Larson(42) rounded out the top 5. No team can complete the race without another pit stop for fuel. When those stops occur and how cleanly they are executed will determine who wins The Brickyard 400.

Bowyer, Ryan Blaney(12), Kurt Busch, and Keselowski, all led during the closing laps of the race. When the pit stops cycled through Hamlin held the lead with Bowyer in 2nd. Debris on the front stretch brought out the caution 18 laps from the finish.

Hamlin, Bowyer, Jamie McMurray(1), Harvick, and Jones are the top 5 cars heading into Turn 1 with 13 laps to go. Hamlin jumps to the lead with Bowyer following in 2nd. Bowyer has to fight off a challenge from McMurray but holds onto the 2nd position. This allows Hamlin to stretch his lead.

With 7 laps to go Landin Cassill(00) and Jeffrey Earnhardt(96) get together in Turn 3. The late race restart should be exciting.

Fighting For the Win

This time the restart line-up is Hamlin, Bowyer, Keselowski, McMurray, and Jones. Hamlin took the lead into Turn 1, followed by Bowyer and Keselowski, with Jones in 4th. Keselowski had the freshest tires and they helped him pass Bowyer. He set his sights on Hamlin. The two cars banged doors for a lap and Keselowski made the pass. Jones passed Bowyer and Hamlin for 2nd. A great finish for the Byron, Michigan native.

Keselowski’s victory was the first for Roger Penske. With all of his successes, 17 wins in the 500, he had never won the Brickyard 400. The win was also the 499th for the Penske Organization in all forms of racing they compete in.

Hamlin bemoaned the late cautions that cost him the race.

Jimmie Johnson and Alex Bowman make the playoffs on points, surviving the bubble position and possible elimination. Now the playoff field is set for next week at Las Vegas.

Seven Ford Fusion drivers will compete for the Cup. More than any other manufacturer. With Stewart-Haas Racing qualifying all 4 of their team cars. Is the the year the Blue Oval captures the Championship? Stay tuned.

Results of The Big Machine Vodka 400 at the Brickyard