Friday is media day at Redbud MX for the 2018 Monster Energy Motorcross of Nations. The crowds are growing by the minute as motocross fans pour into the campgrounds around the Redbud track. Excitement is building for what promises to be a fabulous weekend of motocross racing.

The Lasco Press trackside reporter, Ryan Valade, spoke to some of the riders during the media availability session. Here are the highlights.

Ryan: There are a lot of things going on right now getting ready for Monster Energy AMA Supercross with a new team. Have you been focusing on getting a race setup on your 450 or are you still riding your 250?

Aaron: I’ve just been on the 250. This race is really important to me, so I wanted to really focus on this race and put everything I have into it. I really haven’t touched the 450 at all, I’m sure after this it will be wide open until Supercross getting ready and getting that bike setup. I think the Yahama really works for me, it won’t be too hard to find that really good setting for me.

Ryan: You’re familiar with a lot of the guys on that team, do you think that helps you?

Aaron: Yea, I think so. Half the guys that are on Factory Yamaha, used to work for Stars so it’s awesome.

Ryan: What are you doing this winter, staying in California or are you going to be staying out East?

Aaron: The winter I’ll be in California for sure, there’s been a little talk between me and Justin about maybe in February going back to his place and train for the outdoor.

Ryan: Based on the success that you’ve had in the mud, what do you think gives you the edge in these types of conditions?

Aaron: I think growing up riding in it. My Dad used to let me go out and ride in the mud. That’s one of the biggest things. When it does rain, half these guys stay back and go to the gym. But, I like to ride in the rain, and I did it growing up. Especially in GNCC’s they would not shut down the race for anything.

Ryan: Coming from the midwest how much experience do you have riding this track?

Aaron: I came here for a lot of the amateur qualifiers and regionals. I didn’t really grow up riding here, but from 125’s and early 85’s I’ve been here quite a bit, probably 10 times.

Aaron: I love it, it’s amazing. I dig how soft it gets, how rutted it gets and it can hold water.

Aaron: I think it’s going to be a different experience for sure. It’s going to be a challenge especially racing the 450’s. I think I am up for it though, I think it will be awesome. I will learn a lot from these guys and I’ll do what I can to win.

Ryan: What would it mean to you to win the overall here on your home soil?

Aaron: It would mean the world, it probably would mean more than a Supercross and Motocross Championships combined. I’m doing it for my country and if we can bring this trophy back to the USA and keep it for a while, that would definitely cap my year off for sure. 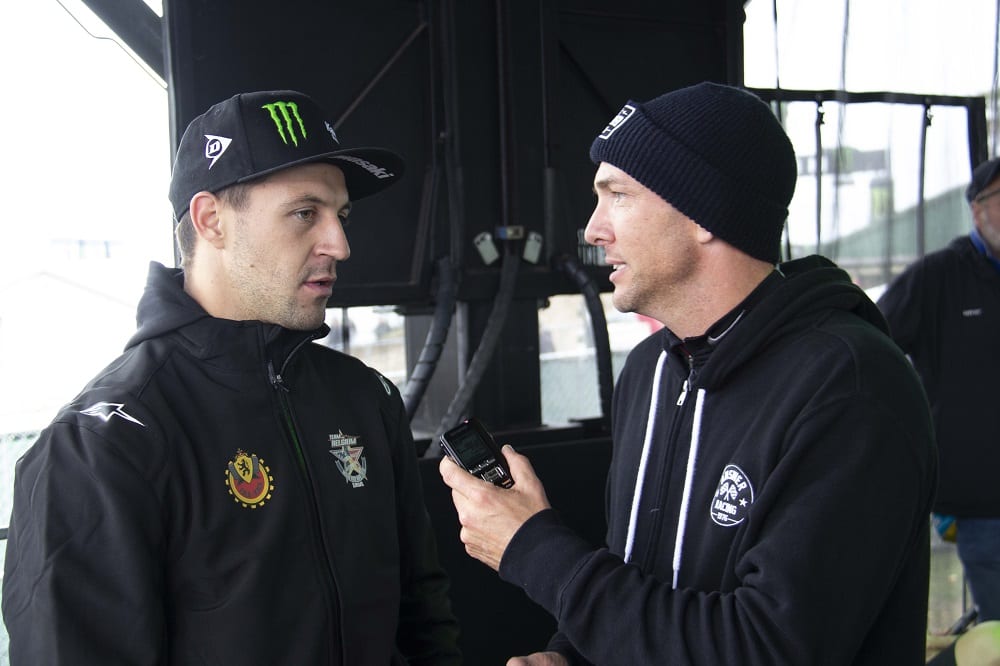 Clement Desalle and Ryan Valade / Lasco Press PhotoRyan: Congratulations on your GP win this year. How would it feel for you to come in here and put on a similar performance?

Clement: It’s true, it was a really good race in Russia. It’s good to be back here, it’s been since 2013 that I raced in the MX of Nations. I think we have a consistent team, we will do our best. We should be up for a good result.

Ryan: The last time you raced in 2013 you won. How does it feel to be back on the team with the guys?

Clement: Good, with Jeremy we’ve been in contact for 6 years so we know each other. Jago is a young guy, our contact is simple. We are ready to start the weekend.

Ryan: Do you feel you have an advantage just coming off the race season whereas the US guys have had a month off?

Clement: Maybe in one way. But, in another way we’ve had 20 GP’s, it’s been a long season. Then straight away we are traveling the week after. But, Team Belgium, we feel good about it, we keep training. We’ll see how it goes. We’ll do our best.

Clement: Yes, but not so much. A small-time, but I wasn’t really testing it.

Ryan: How long have you been in the US and how familiar are you with the Redbud track?

Clement: It’s a nice place, a nice motocross track. It looks like a really good track, I really like it. Some trees, some nice technical spots, some jumps. I am looking forward to it, I hope the weather is better. 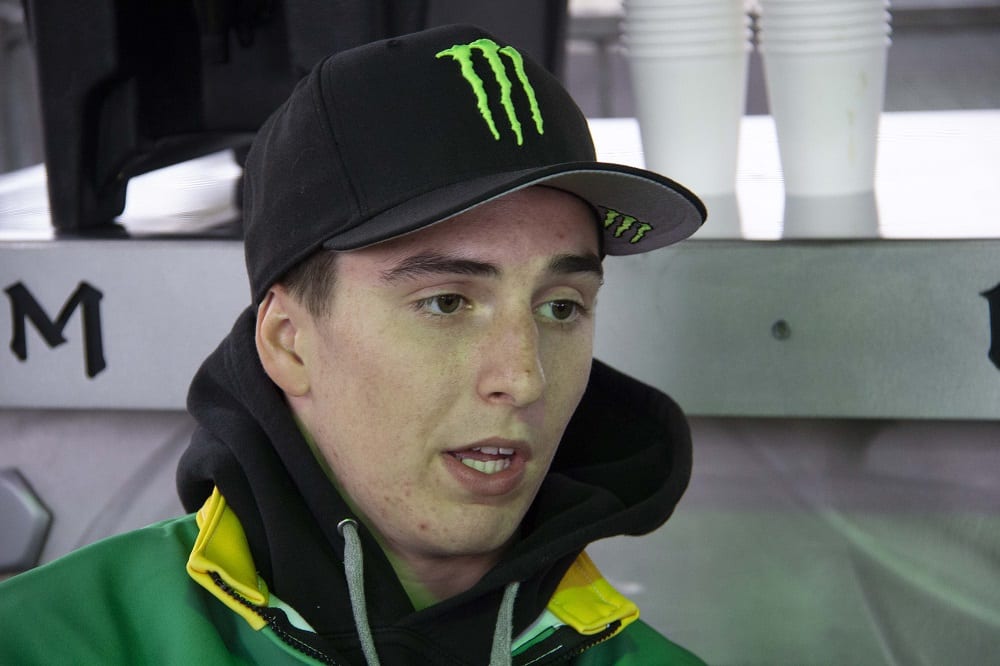 Hunter Lawrence / Lasco Press PhotoRyan: I saw you guys riding some of our local tracks this week. Martin was one. What did you think of the track?

Hunter: It was sick, really sick. It was a bummer that it was so wet. But, it was a sick layout, full of jumps.

Ryan: How much time have you had on the GIECO bike?

Hunter: Just 1 day, we had 1 day. Thankfully, I was able enough to get some more time earlier in the year when we came over briefly. It was cool. It’s a Honda, I rode a Honda in Europe so that makes the transition easier. I feel comfortable on the bike. When you have such a great team they can get you pretty comfortable pretty fast. I’m looking forward to the weekend. The weather looks a little wet.

Ryan: How much different is your GEICO bike from your GP bike?

Ryan: Can you explain some of the differences to us?

Hunter: In Europe, we were a very small team. We had 4 people, including my mechanic, working there. On the GEICO bike, the engine is awesome, we have a factory suspension. In Europe we didn’t have factory parts, we were a privateer team. They did the best they could do. Just as the GEICO guys are doing the best they can do. It’s just the manpower and the budget.

Ryan: So you’re saying you can ride your GEICO bike a little bit faster than your GP bike?

Hunter: I hope so. If I don’t, then there is something wrong with me.

Ryan:  Are you coming here full-time next year?

Hunter: Yes. After this weekend I will fly back to California and I will be staying here until my contract expires. Or I get kicked out of the country.

Ryan: Are your Mom and Dad coming over here with you?

Hunter: Yes, they will be here.

Ryan: Is your brother coming over to ride too? I hear he is pretty fast.

Hunter: Yes, Jett will be here. He’s pretty quick too.

Ryan: How does it feel to represent your country, knowing they have a strong heritage of Aussie riders?

Hunter: It’s bad a$$, to represent your country. For them to say we want you to race at Motocross of Nations I’m proud as punch. We have an amazing country, it’s cool. It’s a time at Nations where you can be as patriotic as you want and people don’t look at you weird. It’s cool.

Ryan: What are your offseason plans.

Hunter: Just train my a$$ off.

Ryan: Have you started riding Supercross yet.

Hunter: Not yet. But I’ve done it in my past. I grew up as a kid racing Supercross. I’m looking forward to it.

Ryan: So you feel your technique, your background, and how you ride the bike will be a good transition?

Hunter: My technique and how I ride a bike, I think it’s pretty technical. I think it’s a technical style that I can make my way around a Supercross track, no problem.

Tomorrow the on-track action starts. The Lasco Press will continue to bring you “Live Coverage” from Redbud. On-track and off.

Kevin Harvick Puts Ford in Championship 4 With Win at Texas