For those of us who like the nostalgia of sitting outdoors at a big-time hockey game, that experience is just weeks away. The University of Michigan will travel to South Bend, Indiana to face off with the Notre Dame Fighting Irish at Notre Dame Stadium. The January 5, 2019 matchup comes just 4 days after the NHL Winter Classic at the same venue. 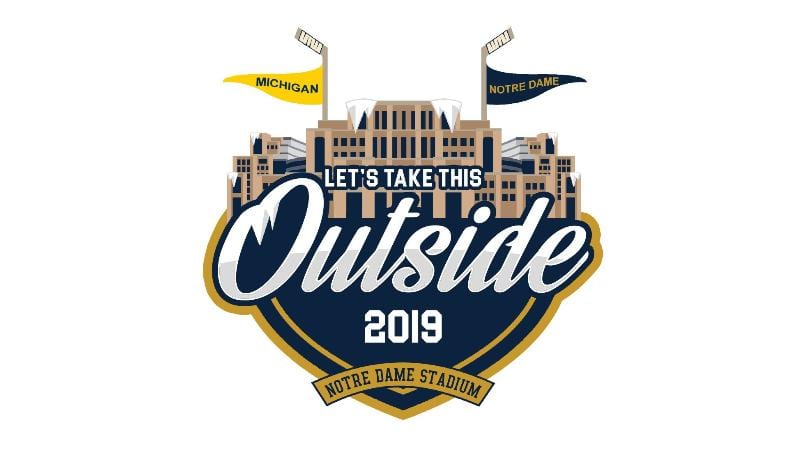 This year’s NHL Winter Classic features the Boston Bruins vs the Chicago Blackhawks. Traditionally played on New Year’s Day at a baseball or football stadium. The 2019 edition is set for January 1, 2019, at Notre Dame Stadium. Michigan Stadium hosted the classic in 2014. The Toronto Maple Leafs and the Detroit Red Wings played before a record 105,491 fans on New Year’s Day that year.

The Michigan Wolverines and Michigan State Spartans started the modern era of outdoor games in 2001. The “Cold War” had the two schools playing at Spartan Stadium on October 6th. A crowd of 74,544 fans saw the 2 schools play to a 3-3 tie that day. An outdoor rematch was scheduled for Michigan Stadium in 2010. Dubbed “The Big Chill at the Big House” saw the Wolverines rout the Spartans 5-0. The December 11, 2010 matchup drew 104,173 spectators to downtown Ann Arbor.

The House that Rockne Built

Notre Dame Stadium seats 77,622 for football and is one of the classic college football venues in the country. The “House that Rockne Built” sits on the campus of Notre Dame University. At the north end of the stadium, the Hesburgh Library rises above the end zone seats.

A giant mural of the resurrected Christ, by artist Millard Sheets, adorns the stadium side of the building. The work entitled “The Word of Life,”  pictures Jesus standing with his arms upraised. Affectionally referred to as “Touchdown Jesus” by fans and media. Expect the image to receive a rebranding. What could be more appropriate for a hockey game than “Jesus Saves.”

The Wolverines and Fighting Irish have a rich tradition in football. Many casual fans may not know that rivalry extends to the ice arena. The schools have met 140 times on the ice. With Michigan holding a 76-59-5 all-time record in the series.

Tickets to the game are available online at the Notre Dame Event Tickets website.