For a racer, a scheduled event at Daytona International Speedway is always circled on the calendar. Round 10 of the Monster Energy AMA Supercross circuit visited the World Center of Racing this evening. Racing on the Stadium Course inside the speedway tri-oval thrilled the fans in attendance.

Wild action started early in the 250SX heats. As usual Austin Forkner(24) dominated his Heat. Chase Sexton(23), third in the season points standings, took the holeshot in the second heat. But, on the first turn Sexton bogged down in a rut and stacked the whole field up as he dropped his bike. As riders passed the pileup Sexton quickly dropped out of qualifying position. He fought back to finish 4th and make the main event. Justin Cooper(32) took the Heat 2 win.

Forkner took the holeshot but on the first turn, Kyle Peters(55) passed both Forkner and Cooper to take the lead. Peters surrendered the lead to Forkner early despite Austin clipping a course marker block while completing the pass. Cooper passed Peters and then surrendered the 2nd spot to Sexton.

As he has done all year, Forkner rode a solid race, stretched the lead, and captured the win. Sexton finished 2nd, 6+ seconds behind. Cooper finished comfortably in 3rd. Forkner’s celebration included an up-close burnout and high 5s with the fans at trackside. Forkner increased his point lead to 23 over Sexton and Cooper who are tied for second. 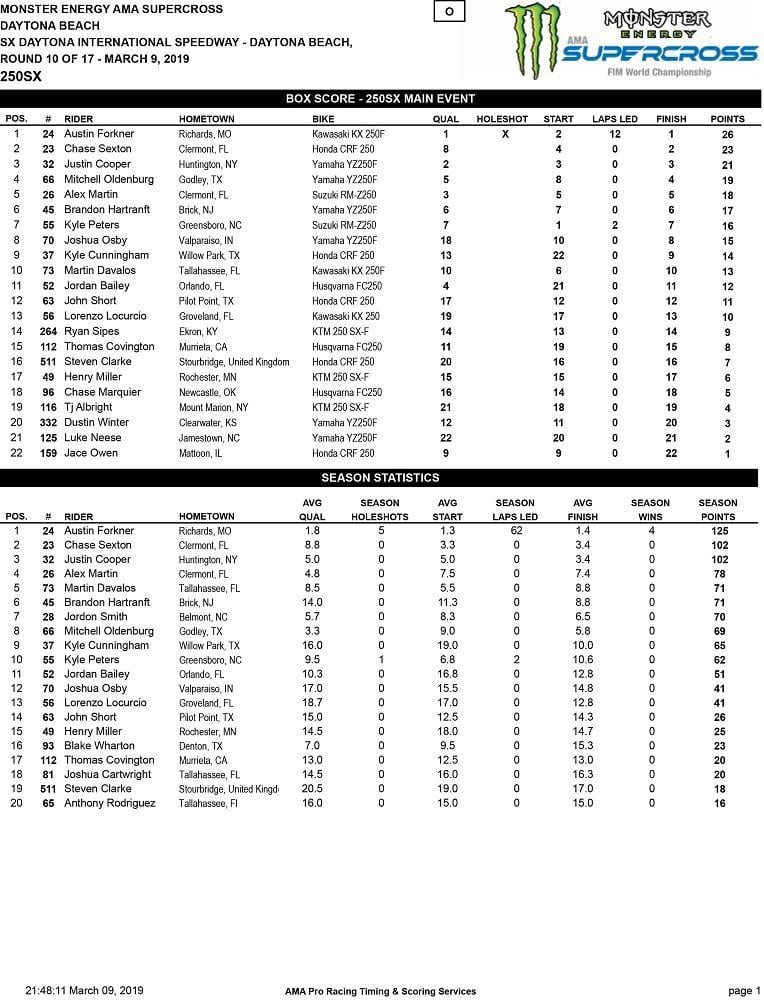 Eli Tomac(3) took the lead from the start of the 450SX Heat 1. He fought off an early challenge from Ken Roczen(94) to build a 2-second lead. Tomac easily held on for the Heat win as Roczen could not pull close enough to pressure Eli.

Virtually the same thing happened in Heat 2 as points leader Cooper Webb(2) dropped his bike in the first turn. Marvin Musquin(25) got caught in the mess. Webb was 7th at the end of Lap 1, Musquin was out of the top 9 transfer spots. In a remarkable display of riding right to the edge of crashing, Webb fought back to finish 2nd. Taking the position coming out of the final turn. Musquin climbed back to 5th, qualifying for the main event. Blake Baggett(4) took the Heat 2 win.

Roczen had trouble at the start and went down in the sand section of the track. Back on the bike, Roczen was in 21st at the beginning of Lap 1. Baggett took the lead early as Tomac and Musquin swapped positions while trying to chase down the leader. Tomac moved to the front as he and Baggett swapped the top spot 3 times in 1 lap. Musquin passed Baggett for the second spot, then he ran off the course and dropped to 5th.

Webb moved to 2nd, with Baggett in 3rd, and Musquin working his way back to 4th at the halfway point of the moto.

Aaron Plessinger missed a triple, landing hard on the top of a mound. Plessinger flew over the handlebar of his bike. He landed on his feet but injured an ankle. Hobbling off the track, leaving his bike crumpled in the dirt, Aaron quickly signaled for attention from the safety crew.

Tomac built a solid lead and held on to become a Daytona Champion for the 3rd time in his career. Webb finished 2nd and Musquin earned a podium spot with 3rd. Baggett ended up 4th will Roczen fought hard to earn an 8th place result. 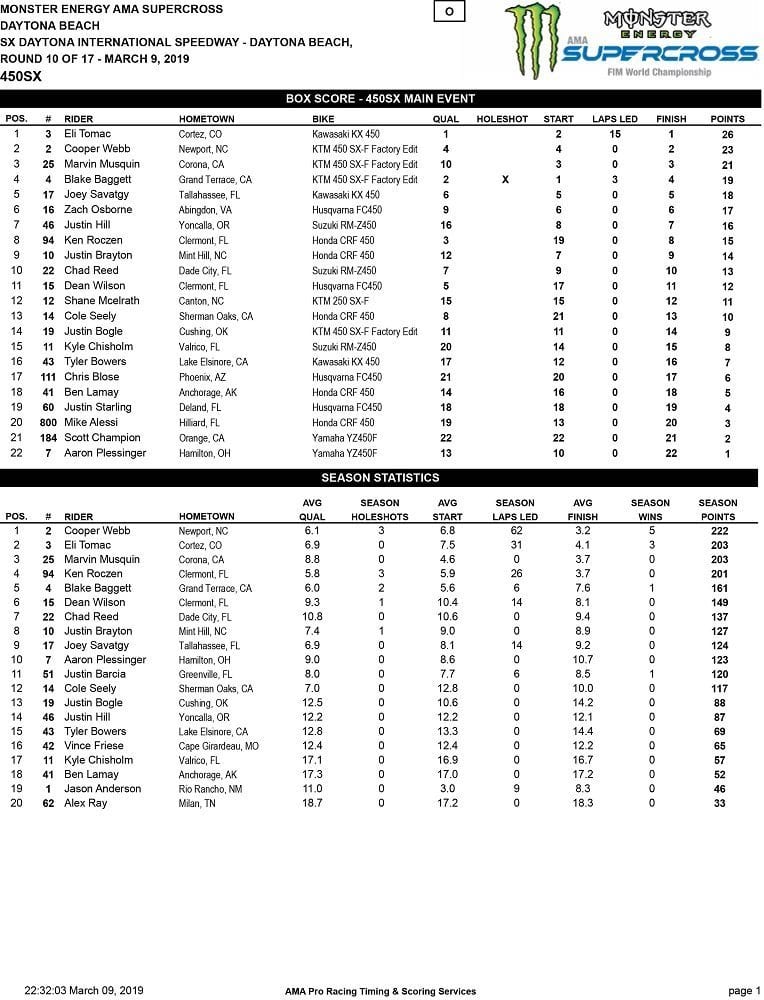 Next week the series stops at Lucas Oil Stadium in Indianapolis. The Lasco Press will be live on the dirt bringing you all the action from Monster Energy AMA Supercross Round 11.