Every once in a while an assignment pops up where we meet some outstanding individuals. Such was the case during a visit to the robotic’s lab at Linden High School. The room was not much more than a closet. It was filled with boxes of electronic parts, batteries, tool chests, and a robot in a plastic bag.

Why the plastic bag? Students have 6 hours between competitions to work on their machine. It stays wrapped up the rest of the time. Except when a reporter arrives and he gets a private viewing and demonstration. Cool.

My experience with robots competition would be limited to watching BattleBots on TV. High School robotics competition is not that violent, but equally competitive. FIRST® Robotics Competition, now in its 30th season, is the organization that oversees the events. There is a lot involved. It’s somewhat confusing for a novice, no problem for the brainiacs that participate on Linden’s team. Hang on and we’ll try to explain.

The competition season starts the 2nd weekend of January when a theme is announced. This year’s subject is DESTINATION: DEEP SPACE Presented By The Boeing Company. The robots are built to service a spacecraft with various components. Each participating team purchases a $5,000 base platform to build from. An expense usually picked up by major sponsors, more on that later.

The student teams then build their robots with components they manufacture or purchase. They have a maximum budget of $5,000 to buy necessary supplies. Those monies come from sponsors, fundraisers or other sources and are managed by a parent committee that oversees finances.

The team has 6 weeks to build their robot and program it for the first competition. A Java programming package comes with the base platform. The students then write code to get their machine to respond to commands. The robot often is out of site when on the competition floor. It must be equipped with a camera that allows the driver to see what’s happening. The driver controls the machine with a joystick hooked to the computer running the coded program.

The Linden High School team is identified at the Linden Roboeagles, their team number is 3568. Each event consists of a series of team alliance battles. Alliances are made up of 3 teams each, so teams must work together to accomplish the common goal. A team will compete in several rounds during a competition, each time in different alliances. Alliances earn points during every round and that total goes to each team in the alliance. Adding those totals at the end of the day determines the winning team.

After the competition, the robot is wrapped up (in the plastic) and the team has 6 hours to make changes and effect repairs before the next competition. The event season consists of 6 weeks with district and regional playoffs to determine teams competing in the International Competition. That’s the simple explanation.

High School Robotics is described as “Combining the excitement of sport with the rigors of science and technology.” A basic tenant of the program is “Gracious Professionalism.” The kids from Linden are a fine example. Polite, respectful, intelligent, and fun to be around. They are genuinely excited to be involved. Some are in the program building a resume for a future career. Others are there just to have fun.

Every skill level is valued by the team. The alliance factor of the competition forces interpersonal communication (without the use of a cell phone). These kids actually talk to you and the Gracious Professionalism is deeply ingrained in personal interactions. An employer that hires one of these students is going to get an individual with a great work ethic and social skills that apply to the workplace. Well done Linden High School!

From left to right in the photo above.

Liam Boillat is in the 8th grade and this is his 1st year. Liam works on the build team.

Ashton Howard is in 9th grade and it’s also his 1st year. He works on the electronic’s systems.

Ted Farley is an 8th grader in his 1st year. He is the teams 3-D printer. The red/orange plastic components on the robot were all created on the high-tech 3-D printer.

Liz Glover is a 10th grader and it’s her 2nd year in the program. Liz is a co-driver, a member of the build team and she is the Linden RoboEagles promoter.

Dominic Bonasse is in 10th grade and another 1st-year team member. He is the drive coach and builds practice hatches for the robot to train on.

Luke Miller is in the 11th grade and this is his 3rd year. He is on the build team and is the equipment operator.

Zachary Sheldon is in 11th grade and a 4-year veteran. His responsibilities include programming, electronics design, and drive team technician performing field fixes.

William Kenyon is in 11th grade and a 4-year veteran. He scouts other teams at competitions to recommend possible alliances.

Tyler Collard is in 10th grade and it’s his 1st year. He also scouts other teams.

Tristan Shannon is in 10th grade and it’s his 2nd year. He works as a programmer on the team.

John Bonasse has coached the Linden RoboEagles for the past 5 years. He is an electrical controls engineer so his professional experience is a great asset to the team.

Performing multiple tasks is another key to the team’s success. Being able to jump in and do other things besides your primary responsibility makes the project more fun for everyone.

Every Team needs a Captain and Noah Deromedi is the guy. As Team Manager he is involved in every aspect of the program. He also meets with the parent’s committee to coordinate project finances.

Team members Gabrielle White, an 11th grader, in her second year works as the safety captain. And Corbin Haak a 10th grader in his 3rd year is a driver and public relations representative. Were unavailable for the photo.

The program could not exist without sponsors like major contributors the Ford Motor Company and the FCA Foundation. The robot sports decals from many of its local sponsors like Lasco Ford, H&H Powder Coating, The State Bank, and the Michigan Department of Education to name a few.

The last thing we’ll mention is the coaches for the Linden Roboeagles, mainly because that’s the way they would want it. It’s all about the kids. During our discussion with the students, they emphasized their team was student led. It was easy for them to see at competitions those teams where the parental influence was almost overbearing. They appreciated the ability to make their own decisions with the guidance of coaching instead of the adults doing everything.

Kudos to Coach Bonassee for creating that type of environment. Additional help from Coaches Miller, Miller, Shannon, and White contribute not just to the success of the team, but the success of the students themselves. Teaching life skills, Gracious Professionalism, communication, interpersonal relationship, and sportsmanship. Keep up the great work coaches your efforts are displayed by the kids in the way they interact with people they meet. 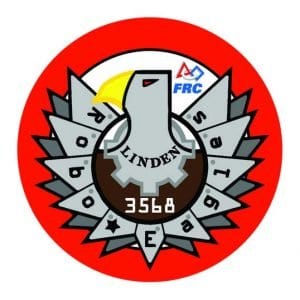 Barnfest 2017 Rockin for a Great Cause