With the Monster Energy AMA Supercross Series stop in Seattle, the West Coast 250SX riders are back on the track. Adam Cianciarulo(92), the points leader, picked up right where he left off winning his heat with ease. Dylan Ferrandis(34) was the fastest qualifier. But, after a poor start in Heat 2, Ferrandis could only fight back to the 2nd position as Colt Nichols(39) took the heat win.

The Last Chance Qualifier was marred by carnage with rider collisions. A red flag forced a complete restart. Robbie Wageman(141) captured the race win. Chris Howell(122) earned the final qualifying spot as 4th place finisher Mathias Jorgensen(221) was penalized for not returning to the course soon enough after being bumped off.

Colt Nichols grabbed the holeshot and lead early after Adam Cianciarulo bobbled in the first turn. Nichols looked strong but on Lap 3 he over jumped the first triple of the rhythm section. This left him short and he crashed over the bars and out of the race. Ferrandis assumed the lead. Cianciarulo battled his way to 2nd and caught Ferrandis but could not make the pass.  Ferrandis rode a great race, more consistent in the quad rhythm and he held strong in the whoops. This was the first career win for Dylan Ferrandis.

Two notable finishers in the race. Chris Blose(111), a full privateer, finished 5th and Michigan’s own Mitchell Harrison(35) took the 7th spot, his best finish of the year.

The points battle is down to these two riders. With the win, Ferrandis moves to within 12 points of Cianciarulo for the top spot. Third place Shane McElarath(12) trails Adam by 40 points. 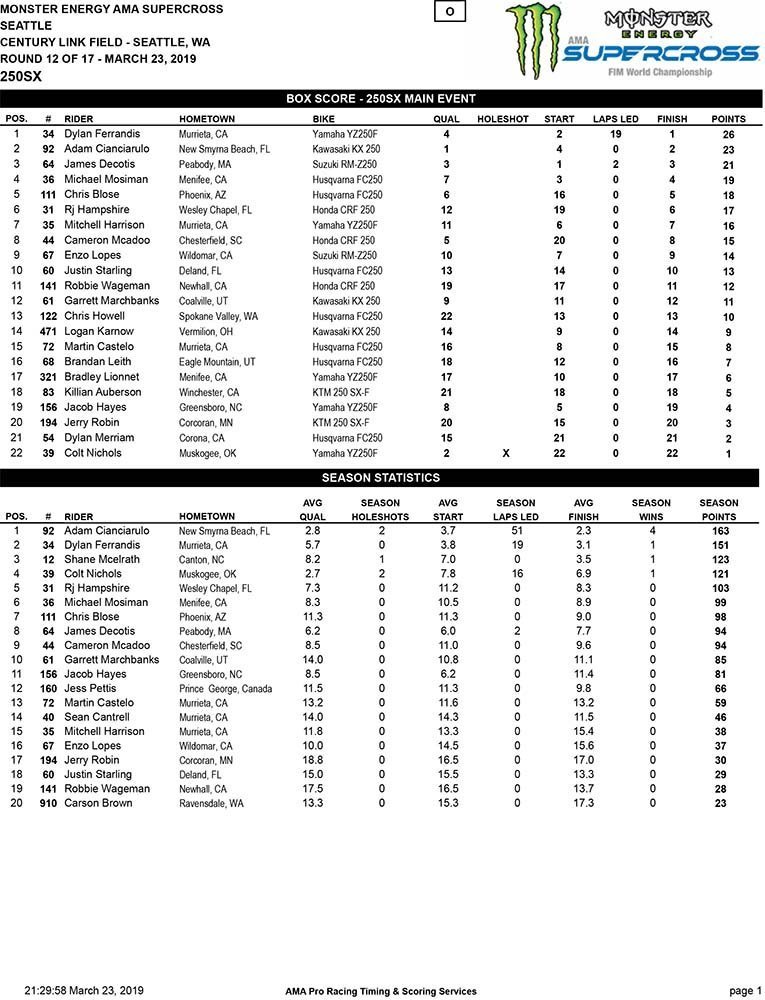 In Heat 2, Cooper Webb(2) and Eli Tomac(3) staged a classic battle all race long. Webb managed to hold off Tomac as he led all 10 laps. Despite Tomac pressuring him wheel to wheel in several spots on the track.

Zach Osborne(16) earned the holeshot but surrendered the lead to Marvin Musquin(25) on the opening lap. Musquin made it two wins in a row by leading all 27 laps of the event. However, the win was not without controversy.

On Lap 1 there was a big pile up in the first straight away that included, Chad Reed(22), Justin Brayton(10), Kyle Chisholm(11) and Ryan Breece(86). As Musquin came back around the riders were still down and the Red Cross flags were displayed. Inexplicably Musquin doubled the section which is strictly against the rules. Riders may not jump any obstacles in the section of the track where the Red Cross flags are out.

Ken Roczen(94) took second and Eli Tomac made the podium finishing 3rd. Cooper Webb(2), the series points leader, fought hard for a 4th place finish. Uncharacteristic for the guy who has looked dominant all year long. After race officials conferred Musquin was allowed to keep the event win. He was penalized 6 points for the Red Cross Flag infraction.

The 6-point penalty proved costly for Musquin. Despite Webb’s 4th place finish, Musquin gained nothing on the points leader. The championship race is still tight with only 14 points separating the top 2 riders. Tomac sits in 3rd, five points back of Musquin, Roczen is 4th, four points behind Tomac.

Chad Reed suffered eight broken ribs, a broken scapula, and a collapsed lung as a result of his crash. Season-ending injuries for the Dade City, FL rider. Next week the Series moves to Houston, TX for Round 13 of 17. Just a few more opportunities for someone to make a big move among the points leaders. 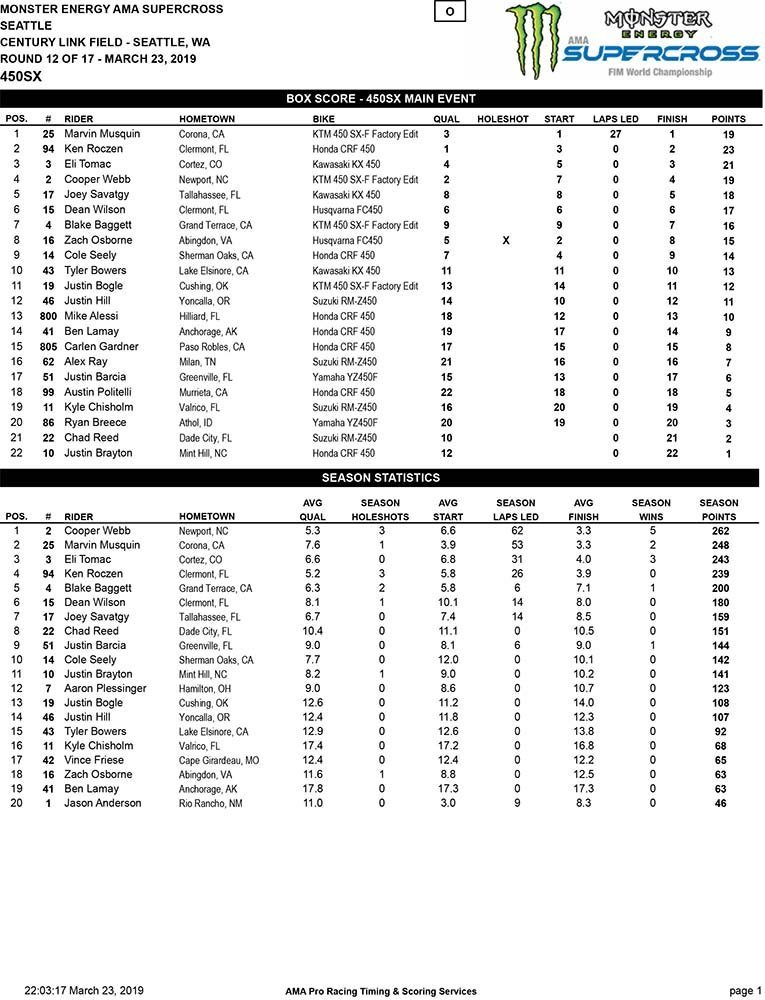 Ricky Carmichael Schools the Next Generation of Michigan Mafia Motocross