The city of Indianapolis is so closely associated with racing it doesn’t matter what series is in town. Every competitor whats to be an Indianapolis Champion. For the 28th time tonight, the gate will drop for a 450SX Class race in Indianapolis. AMA Supercross Round 11 blasts off tonight at Lucas Oil Stadium and the fans are eager to watch the show.

The action started fast and furious in Heat 1. Three riders were forced off the course just past the holeshot line as the field raced for position. Chase Sexton(23) took the early lead and held off Mitchell Oldenburg(66) and Alex Martin(26) to move forward to the main. It was Sexton’s first heat win of the year.

In Heat 2, the same storyline followed. Only this time it was four riders including points leader Austin Forkner(24). It did not take Forkner long to work his way back to a qualifying position. Meanwhile, Justin Cooper(32) executed a last corner pass to take the heat win away from Martin Davalos(73).  Kyle Peters(55) finished 3rd, Forkner fought back to a 5th position finish.

Joshua Cartwright(81), John Short(63), Thomas Covington(112) and Steven Clarke(511), all in the top 20 in points, will have to race their way into the main from the Last Chance Qualifier.

Dean Wilson(15) earned the holeshot and held off several challenges for the top spot. Marvin Musquin(25) and Ken Roczen(94) swapped 2nd and 3rd several times with Eli Tomac lurking in 4th. They ran in that order at the finish of Heat 1.

Heat 2 was all about Cooper Webb(2), of course. With his 3 competitors for the points lead all riding in Heat 1 it was Cooper’s race to win and he did. Joey Savatgy(17) finished 2nd with Blake Baggett(4) in 3rd.

The kids hit the track next racing their 50cc bikes for a chance to go to Las Vegas and race for the championship.  Darren Pine(6) grabbed the holeshot and was never challenged, winning the 3-lap event. River Barker(3) and Lane Willis(13) filled out the podium finishing 2nd and 3rd. The best part, podium interviews, cute. Huge cheers from the fans treated the youngsters to a memory that will last a long time.

Austin Forkner, by virtue of his crash and 5th place heat finish, starts in the 10 gate. Will that create an issue for the dominant rider in the East Coast series of the class. Nope, no problem. Firing out of the starting gate, Forkner grabbed the holeshot and led every single lap.

Sexton settled into 2nd, with Davalos comfortably in 3rd. Forkner had a 5-second lead when he caught the rear of the field and began lapping riders. Mitchell Oldenburg, taking advantage of the lapped traffic, caught and passed Davalos as the clock wound down. But Oldenburg could not hold the spot as Justin Cooper(32) passed him on the final lap to earn the 3rd podium spot. Forkner’s margin of victory? Just over eight seconds, as he slowed up prior to the finish to salute the fans around the final corner.

Austin will get a chance to rest as the West Coast 250 riders return to the track next week in Seattle. 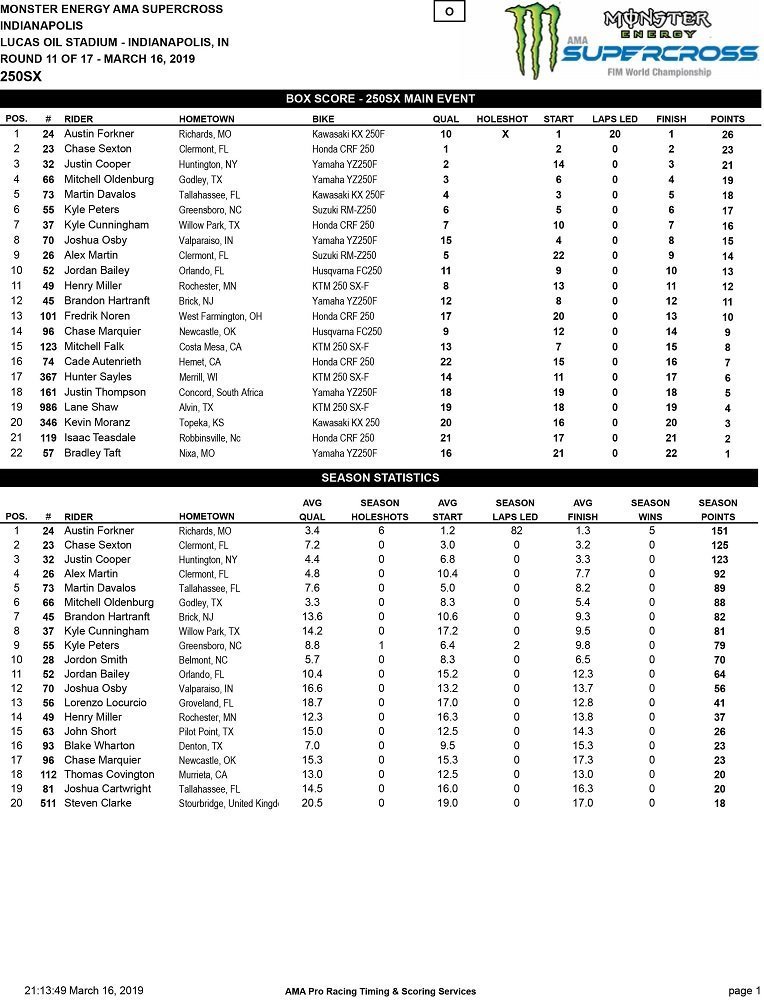 Marvin Musquin earned the holeshot, Joey Savatgy settled into 2nd, and Eli Tomac pushed his way into 3rd on the opening lap. Savatgy missed his landing and crashed out of the finish line jump. Tomac avoided the downed rider and took over 2nd. Blake Baggett inherited 3rd.

The track at Indy featured a split lane just past the finish line. Riders could opt to go high, the longer route, and negotiate a smooth corner. Taking the lower lane was shorter, but riders had to deal with bumps entering and exiting the turn. When Savatgy came off the bike he hit lane markers and temporarily closed the high lane. Track workers took a few minutes to restore order, not wanting to dodge riders landing jumps in the area.

Baggett fought his way past Tomac. Then when Eli encountered trouble on a hairpin turn, hitting a lane marker, Cooper passed him also.

Baggett caught Musquin but could not make the pass. Musquin, coveting his first Main Event win of the year, fought off the challenge. Stretching his lead at the end, Musquin got the victory.

Musquin cut Webb’s point lead down to 14, with Tomac and Roczen falling 20+ points behind the leader. 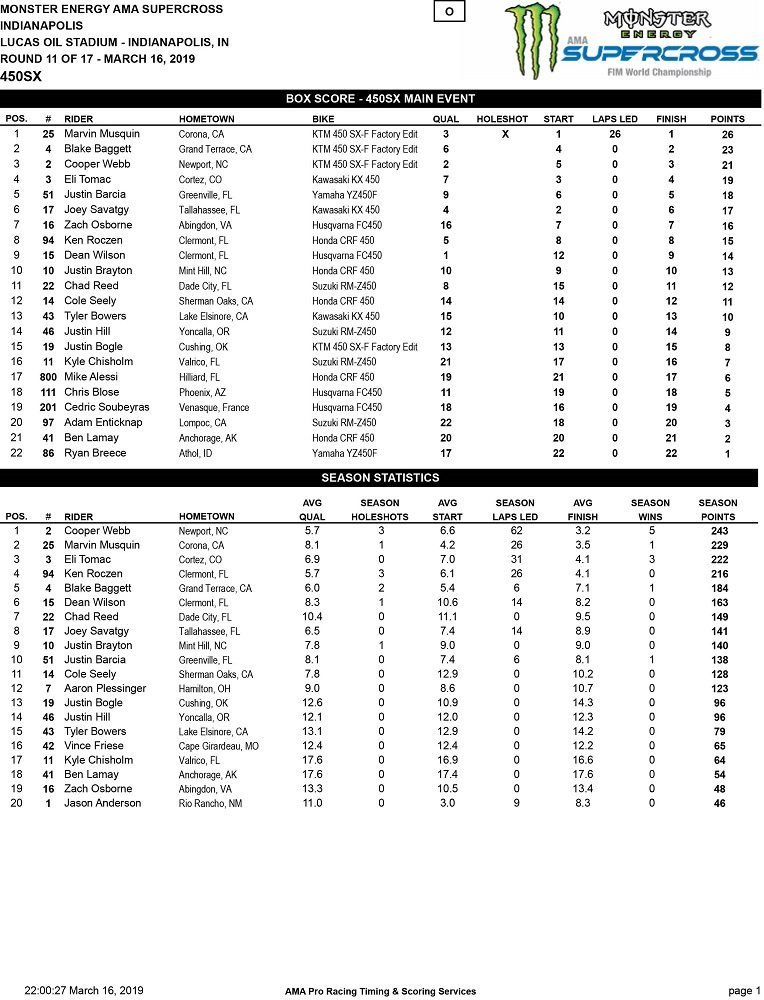 Marvin Musquin Makes it 2 in a Row with Win AMA...