With the season finale at Las Vegas looming next Saturday night, the Monster Energy AMA Supercross event at East Rutherford, NJ, was the last chance for riders to position themselves for the outcome of the season-long points standings. The 450SX title chase is not final, but leader Cooper Webb(2) is poised to clinch his first 450 SX Championship.

Austin Forkner’s(24) knee injury from Nashville came back to haunt him and he dropped out of the 250SX Eastern points lead.

Riding with a torn ACL did not keep Austin Forkner from making the 250SX Main Event at New Jersey. He qualified 8th. Holding a slim three-point lead over Chase Sexton(23) in the points standing, Forkner needed to stay within one position of his championship rival to keep the points lead.

Unfortunately, Forkner was forced to withdraw mid-race when the knee gave out. He finished a disappointing 22nd, in last place, earning only a single point on the night. Sexton won the event and vaulted into the points lead.

The top of the Championship points race now shows Sexton leading with 174 points. Justin Cooper(32) in 2nd with 165, and Forkner 3rd at 152. Virtually eliminated the season-long leader from the title chase.

Eli Tomac(3) came to New Jersey trailing Cooper Webb by 18 points for the 450SX Championship. Needing a win and some back luck for Webb, Tomac found neither.

Tomac led early staying out front for 6 laps. Then a crash in the whoops section mired him back in the pack. Tomac responded with a furious run, clawing his way back to 2nd before crashing again at the exact same spot on the track. He ended up 3rd.

Webb won the event and now holds a 23 point lead over Tomac. A place in the main event at Las Vegas and anything but a last-place finish gives Webb the Championship. 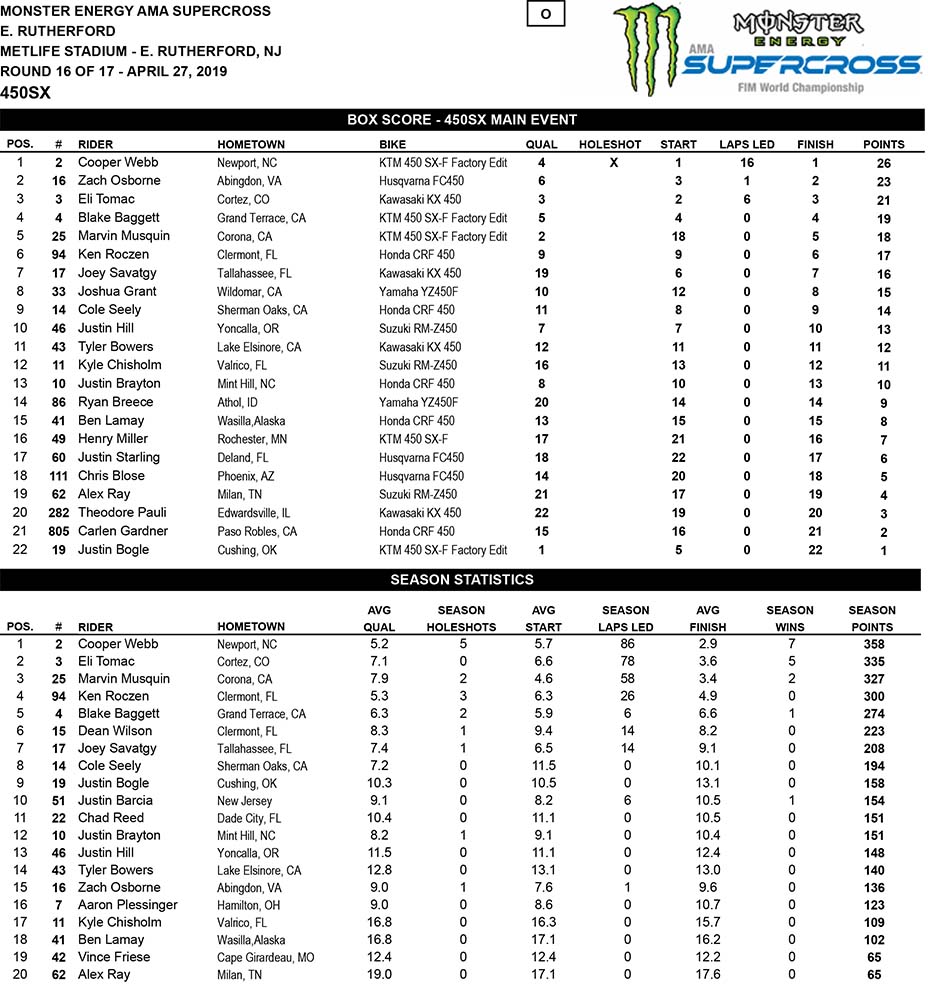