Most of the drama in the AMA Supercross Series Championships played out last week at New Jersey. With the exception of the 250SX West riders where Adam Cianciarulo(92) held a slim eight-point lead over Dylan Ferrandis(34) heading to the finale in Vegas.

The heartbreak story of the year in the 250SX East ended with Austin Forkner(24) unable to compete in the season finale. After injuring his knee in Nashville and doing further damage to the joint at New Jersey, Forkner could not ride in Las Vegas. The injury derailed what was a dominant performance by Forkner through most of the 250SX East season.

Chase Sexton(23) led all eight laps of the Heat with Martin Davalos(73) four seconds back in 2nd. Justin Cooper(32), 2nd in the points finished back in 6th place.

RJ Hampshire(31) captured the 250SX West Heat in a close battle with Michael Mosiman(36).  Cianciarulo ran 3rd and Ferrandis 4th setting up their battle in the East/West Showdown main event.

At the start of the 250SX Main event Hampshire earned the holeshot, but Ferrandis quickly took the lead. Cianciarulo was 5th at the end of the 1st lap, just within the point margin necessary to retain the Championship lead. Riding solid Cianciarulo moved into the 3rd position, all he needed to maintain a points gap over Ferrandis who was firmly in the lead of the moto.

Disaster struck when Cianciarulo missed a 15 foot double. Landing hard and damaging his bike, the handlebars were torqued out of position. Even though the pit stop for repairs was quick, the mistake cost Cianciarulo his chance at the points Championship. He finished 20th.

In the East points battle Chase Sexton(23) ran a smart solid race and clinched the championship with a 4th place finish. Justin Cooper’s(32) 8th place, finished out his season for 2nd in the points standings. 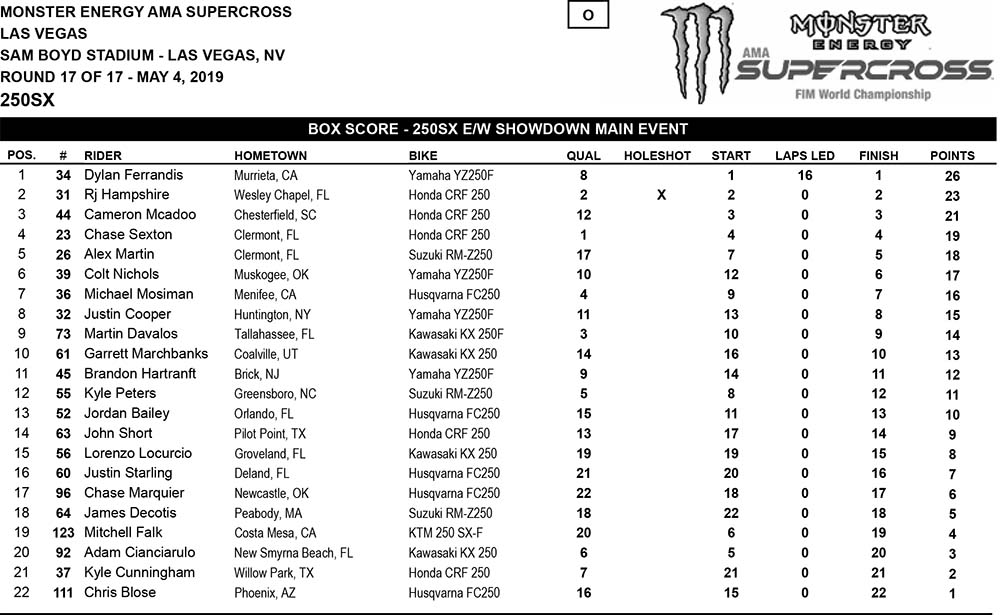 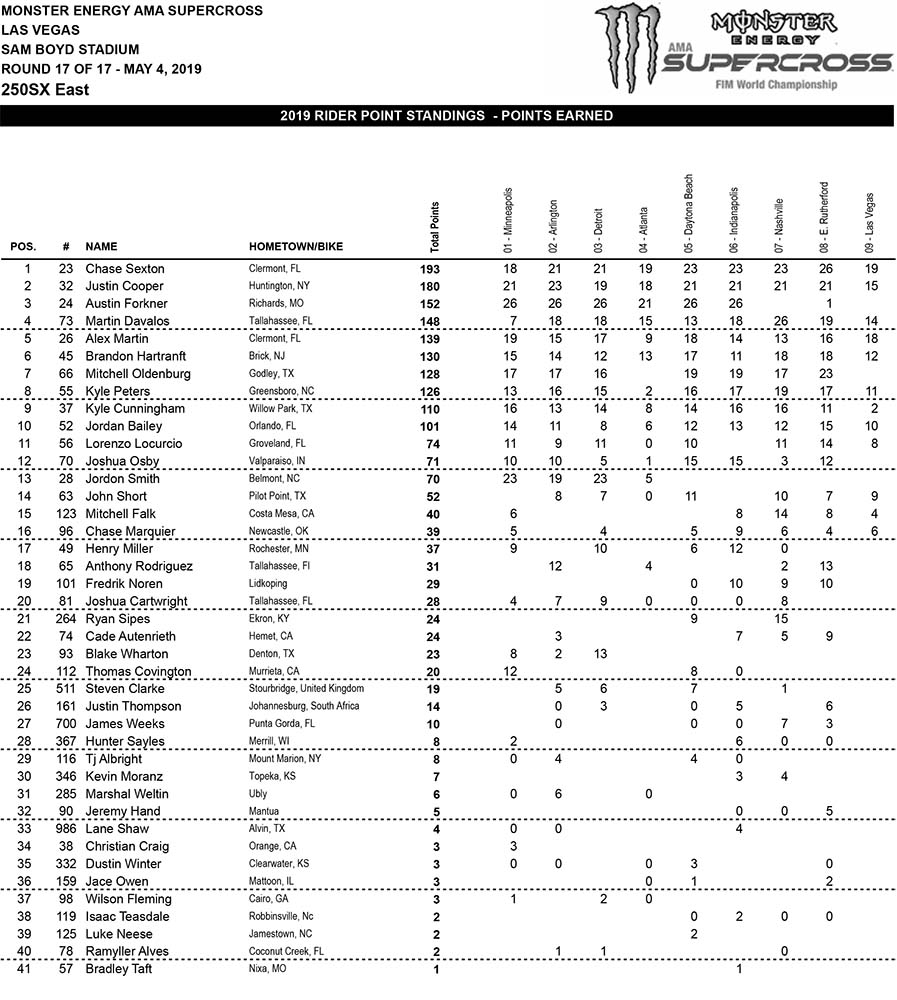 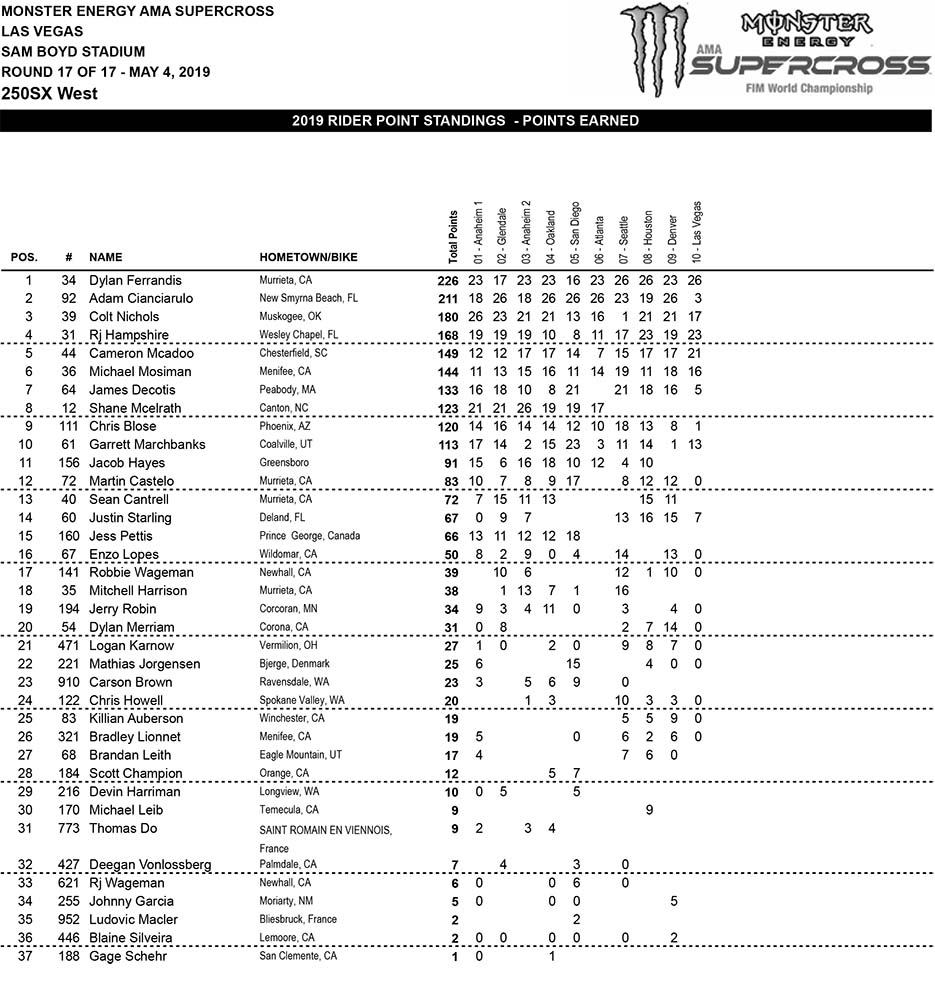 Eli Tomac(3) entered the night needing a win and some misfortune to befall Cooper Webb(2). Tomac did his part right from the start, capturing the holeshot and leading all 22 laps of the 450SX Main.

Webb had no issues, riding a clean fast race he took a podium spot with his 3rd place finish. Capturing the coveted 450SX Championship. Fittingly the top four riders in the 450SX class all finished in the top four at the Vegas final. Marvin Musquin(25) in 2nd and Ken Roczen(94) in 4th. 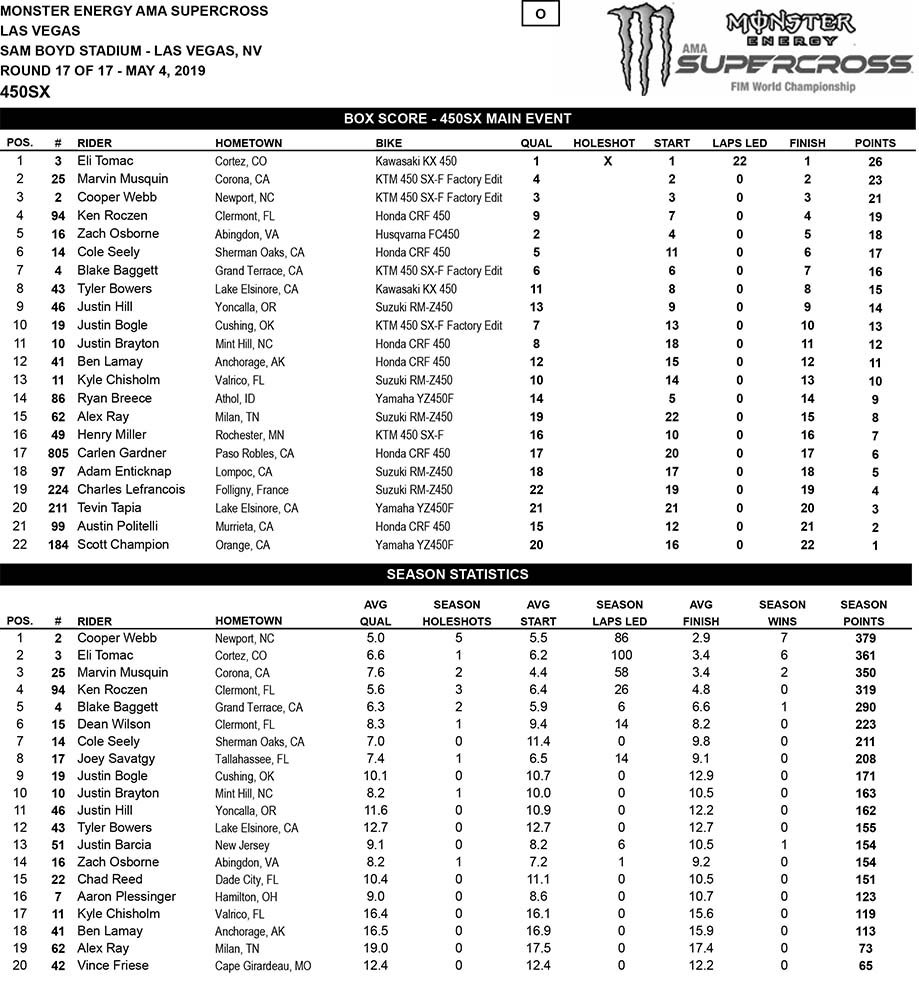