NASCAR’s All-Star race has been the site of many memorable battles. Put up $1 million dollars, let a bunch of the best race car drivers in the world try to win that check, anything can happen and usually does.

Those eligible for the 2019 Monster Energy All-Star Race include:

All-Star qualifying consisted of three laps during which drivers hit pit road at full-speed for a tire change. Clint Bowyer(14) won the pole with the best total time of the 15 drivers already locked into the event. 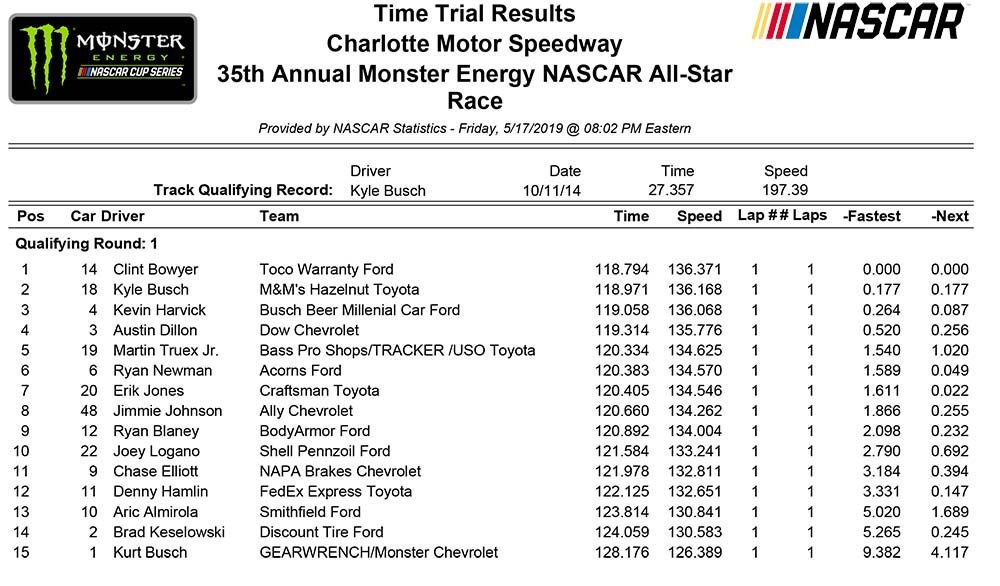 Daniel Hemric(8) started on the pole, Michael McDowell(34) sat beside him on the front row. Hemric jumped off to the early lead. However, it did not take long for Kyle Larson(42), Alex Bowman(88), and William Byron(24) to line up and begin to track the leader down.

The way Bowman has run the last few weeks with three 2nd place finishes in a row, he is certainly the favorite to capture one of the spots advancing to the All-Star event.

BJ McLeod(37) exploded an engine on Lap 16. With special rules for the Open and All-Star race, Stages cannot end under caution. So after cleaning up the fluid McLeod laid down on the track, Stage 1 of the Open went into overtime.

When pit road opened, Hemric and Larson were the only leaders that stayed out. Most of the field pitted for fresh tires. Bubba Wallace(43), Matt Tifft(36), and Corey LaJoie(32) stayed out and lined up 3rd, 4th, and 5th. Bowman, 1st off pit road, restarts in 6th.

Larson got a huge push from Wallace as the two drove away from the field. Wallace, driving Richard Petty’s number 43, dove under Larson and they raced for a lap trading door bumps. Wallace took the lead in the middle of Turns 3 and 4. Coming towards the tri-oval Byron, with 4 fresh tires, drove inside Wallace and gave him a big shot in the door. Both drivers maintained control and bumped again heading to the checkered flag. Byron edging Wallace for the win and the 1st ticket into the evening’s main event.

A much tighter restart for Stage 2 saw drivers going three and four wide. Bowman ultimately took the lead and began to pull away from Daniel Suarez(41) in 2nd. Ryan Preece(47) ran 3rd, with Matt DiBenedetto(95) in 4th and Hemric in 5th.

With six laps to go, Bowman ran up on lapped traffic. Suarez closed to a car length and the battle for the Stage 2 win was on. With 2 laps to go Hemric was passing Preece for 3rd. Hemric completed the pass but got loose coming into the tri-oval. The two touched and Hemric spun, with a little help from Preece. The wreck ended Hemric night.

Once again the Stage would be decided in overtime. Bowman stayed on the track, all the other leaders pitted for tires. Moving up to the front row was the 43 of Wallace for another try at the Stage win.

Wallace was the benefactor of the big push on the restart this time, as Suarez drafted close behind taking the two cars into the lead. Suarez moved to the outside and passed Wallace down the backstretch. Wallace held the low line and side drafted back past the 41 car into the lead just past the start/finish line. Suarez made one more run for the win dropping low off Turn 4 and Wallace drove him into the grass. Suarez spun crossing the line with Wallace taking the win.

Bubba’s friend Ryan Blaney met him in the garage for a big hug as tears streamed down Wallace’s cheeks. Two Stages, two spectacular finishes. The night was off to a great start.

Stage 3 of the Open was only 10 laps. Ty Dillon(13) took the early lead with Larson right on his tail. With 4 to go Larson took the lead. Bowman made a furious run to the front but with 1 to go, he could only manage a 3rd. Larson earned the last race-in spot to the All-Star Feature.

Wow, all that just to get into the Feature. What happens when a Million Dollars is on the line?

Results of The Monster Energy Open

Stage lengths for the All-Star Race will be 30 laps, 20 laps, 20 laps, and 15 laps. The winner takes home $1,000,000. No points to worry about, wreckers or checkers is the theme for this race. While not every seat is full, a nice crowd in attendance at Charlotte Motor Speedway will cheer on their favorite driver. It was 92° in Charlotte today. At race time, under the lights, the thermometer read slightly lower at 82°.

Clint Bowyer sat on the pole with Kyle Busch(18) beside him on the front row. But, it was Kevin Harvick(4) who drove off into the lead on the opening lap. Kyle Busch, right on his bumper, seemed to be testing different lines on the track to see how his car responded and reacted to the draft of Harvick’s car.

With 11 laps to go in Stage 1, Kyle Busch passed Harvick for the lead. Running side-by-side brought 3rd place Martin Truex Jr.(19) into the mix as now three cars were in the lead battle.

Erik Jones(20) cut down a right front tire and debris from the shredded Goodyear and Jones’ fender brought out the caution, sending Stage 1 into overtime. Everyone but Brad Keselowski(2) pitted. He lined up on the front road next to Kyle Busch for the restart.

Bowyer pushed Keselowski keeping him even with Kyle Busch through the first and second turn. Bowyer made it three-wide down the backstretch to take the lead. Kyle Busch passed for the top spot, followed by Harvick and Bowyer for 3rd to the finish of Stage 1. Keselowski finished in 16th.

For the start of Stage 2, its Kyle Busch and Harvick in row one with Bowyer and Joey Logano(22) right behind them in the second row. Two laps in Ryan Newman(6) and Wallace got together. Newman slid through the artificial turf on the tri-oval, escaping with minimal damage. The installation of the carpet keeps the front splitter from digging into the grass and dirt. Keeping the driver safe and generally allowing him to continue in the race.

On the restart, Logano pushed Harvick past Busch for the lead. Larson moved to 3rd, Ryan Blaney(12) to 4th and Byron to 5th. Kyle Busch dropped to the 6th position. Harvick won the Stage by a comfortable 2-second margin over Logano.

Everyone came to pit road for tires, fuel, and adjustments during the Stage ending caution. Stage 3 restarts with Bowyer out front, followed by Logano, Byron, Keselowski, and Chase Elliott(9).

Logano drove to the lead when the green flag waved, while Harvick dropped off the pace complaining of a loose wheel. Kyle Busch and Austin Dillon(3) got together causing Dillon to slide up into Jones’ car. Making the night for the Byron, MI driver that much worse. But, preventing Harvick from going a lap down when the caution displayed for the dust-up.

The green flag waved with 11 laps to go in Stage 3. Logan in front, Keselowski in 2nd, Elliott in 3rd, Byron in 4th and Bubba Wallace amazingly up to 5th. Logano held on for the Stage win with Elliott taking 2nd.

The Final Stage for All the Money

Logano, Elliott, Jones, and Kyle Busch stayed on the track while the rest of the field came to pit road for fresh rubber. Whose strategy will cash the big check? Of the top 4, Busch may have the advantage as he coasted much of Stage 3 at the back of the pack to save his tires.

Kyle Busch pushed Elliott to the lead and then passed him to take the top spot. Back in the pack, Bowman, Denny Hamlin(11), Truex and Harvick went four wide across the start/finish line. Hamlin and Truex suffered damage to their cars with Hamlin cutting a tire and spinning the next time around the track.

Restart With 13 Laps to Go

Kyle Busch led the restart until Harvick pushed Larson to the lead. Before they completed a lap, Jones was in the wall again bring out another caution.

Next time back to the green it was Larson, Kyle Busch, Elliott, Harvick, and Newman as the top 5. Logano pitted out of 5th position for fresh rubber, he restarted in 17th. With 5 laps to go, Logano moved to 5th.

On the cool-down lap, Ryan Newman and Clint Bowyer didn’t cool off. Newman upset with Bowyer ran into the number 14 car down the backstretch. The two exchanged blows around the track until parking next to each other on pit road. Bowyer jumped out of his car, leaned into the window of Newman’s car, and unleashed a combination of fists that would make any boxer proud.

Bowyer summed up the conflict like this, “Where I come from you get punched in the nose for that, and that’s what he got.”

Tonight’s Saturday night under the lights and a full moon had a little bit of everything. Close racing, exciting finishes, even a fistfight to close out the night. Next Sunday we do it all again with the Coca-Cola 600 under the lights of Charlotte Motor Speedway. The All-Star action is sure to put fans in the seats for NASCAR longest and toughest race. What will we see then?

The Lasco Press continues live coverage next week from Charlotte and be sure to look for a surprise feature this week entitled “NASCAR Nostalgia” from North Carolina’s rich racing history.

February 2020: Inside the Garage, NASCAR Updates from Daytona