If you have not seen the trailer for the upcoming movie from 20th Century FOX “Ford vs Ferrari” you can view it at the end of the article.

If you don’t know the story of the film about events leading up to the 1966-24 Hours of Le Mans, keep reading.

From a worldwide view, the 24 Hours of Le Mans is arguably the most famous automobile race on the planet. Only the Indianapolis 500 can begin to compare in stature. For Europeans, the Monaco Grand Prix is the only other racing event mentioned with a similar amount of reverence.

Le Mans stands out, in part, because it is an endurance race. A test of man and machine for two complete revolutions of the clock. The 24-hour contest was representative of manufacturer durability. If a car, its engine, and other moving parts could survive the abuse of an all-out assault on the race track, that was reflective of its durability in everyday consumer use.

Before race cars no longer resembled their cousins parked in driveways and garages. Winning on the race track resulted in winning the sales battle in dealer showrooms. It was an essential marketing element, especially for performance vehicles.

The 24 Hours of Le Mans was not held during the World War II years and during France’s initial rebuilding efforts in the period following the war. After a ten-year hiatus, post-war racing resumed in 1949 with a Ferrari 166MM motoring to the victory. The same model sold throughout Europe by Ferrari dealers.

Over the next 16 years, Ferrari won the 24 Hours of Le Mans eight more times. Including six victories in a row from 1960 to 1965. that dominance did not go unnoticed. 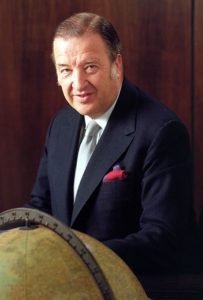 Henry Ford II, the oldest grandson of Henry Ford and CEO of Ford Motor Company had a love for racing and a head for business. Looking to expand the companies holdings, and build Ford’s racing resume, he attempted to purchase Ferarri from Enzo Ferrari.

A racer turned Italian automotive titan, Ferrari was eager to put a deal together with the American iconic Ford brand. Negotiations went on for an extended period until ultimately breaking down over of all things, racing. Ferrari was unwilling to relinquish control over his companies motorsports program.

Snubbed in the Boardroom, Reacting on the Race Track

Henry Ford II was a man unaccustomed to rejection, Rarely did he not get what he wanted. He took Enzo Ferrari’s refusal to sell as a personal affront. How better to seek revenge than to challenge the Italian automaker’s dominance on the race track.

Ford hired Carroll Shelby to develop Ford Racing into a powerhouse road racing team. Despite a challenging start, Shelby’s expertise at race car engineering and design develops the Ford GT40 into an incredible machine that can compete with anything on the track during its era.

British driver Ken Miles was not a well-known racer when Shelby hired him to pilot the GT40 Mark II. A race car builder in his own right, Miles helped fine-tune the GT during its final development.

Miles piloted the car to victory in the 1966 24 Hours of Daytona. He followed that up with a win in the 12 Hours of Sebring. Next came the race at Le Mans and the challenge of ending Ferrari’s dominance there.

Late in the race Miles was leading and cruising to victory. He was to become the only driver to win the world’s three biggest endurance races all in the same year. With Ford GT’s holding down the top three positions in the race Ford executives wanted a picture of the trio crossing the finish line together. Miles was ordered to slow down and let the team cars catch up. As the 2nd place car of Bruce McLaren neared the checkered flag he suddenly hit the accelerator pushing his car across the line first. The win went to McLaren, denying Miles the distinction of the triple endurance winner.

Later the same year Miles was testing another Ford race car at Riverside International Raceway in California when he lost control and crashed. He did not survive the accident. Miles was 47 years old at the time of his passing.

The Ford GT is still winning races today under the direction of Ford Performance and Chip Ganassi Racing.

And yes, you can buy a street legal edition of the Ford GT and even pick Lasco Ford as your delivering dealer.  That is if your applications gets accepted, only 250 of the wildly popular models are produced annually.

About the Movie Ford vs Ferrari

Academy Award®-winners Matt Damon and Christian Bale star in FORD v FERRARI, based on the remarkable true story of the visionary American car designer Carroll Shelby (Damon) and the fearless British-born driver Ken Miles (Bale), who together battled corporate interference, the laws of physics, and their own personal demons to build a revolutionary race car for Ford Motor Company and take on the dominating race cars of Enzo Ferrari at the 24 Hours of Le Mans in France in 1966.