In fact, the total number of representatives from Genesee County for the 2019 Michigan Competing Band Association (MCBA) State Championships is five. While the omission was certainly not intentional, the Linden Eagles Marching Band will also be at Ford Field this Saturday to contend for a state title.

Last year at the MCBA competition Linden placed 7th in their flight. With that experience under their belts, the band hopes to improve on their performance this year.

Prior to competing in this year’s championships, the Linden Eagles Marching Band will host a Community Performance at the Linden High School Football Field on Friday, November 1st at 7:30 pm. 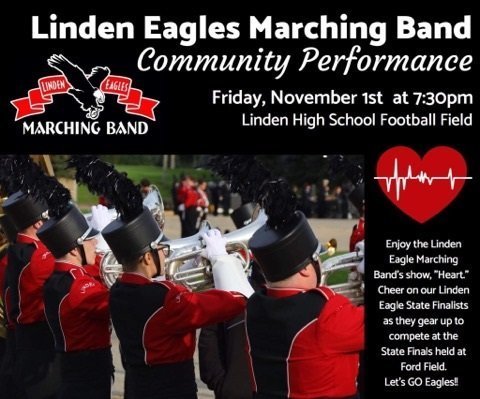 The Linden Eagles will compete in Flight Four at 9:52 pm. Clio is in the same group and their performance is scheduled for 8:56 pm. Awards for the last flight of the day are to be presented at 10:20 pm. Flights are assigned based on attendance figures at the competing high schools.

Carman Ainsworth and Flushing are in Flight Two with times of 11:14 am and 12:10 pm respectively. The Grand Blanc Marching Band will appear in Flight 1 at 5:56 pm.

Competition starts with Flight Three at 8:00 am and bands perform approximately every 14 minutes with short breaks between the Flights. Tickets are $20 for adults, students and seniors $15, children under 5 are free. Tickets are available the day of the event at Ford Field, note that it is cash only for ticket purchases. Ticket booths open at 7:00 am and stadium gates open at 7:15 am.