Frozen is not just a feeling in the air in the Lake Fenton Community Schools. It is also the title of the upcoming joint production between the Lake Fenton Theatre’s YOU-THeatre and Torrey Hill Play Production club.

Disney’s Frozen Jr will take the stage this weekend at the High School, with shows running through Sunday. 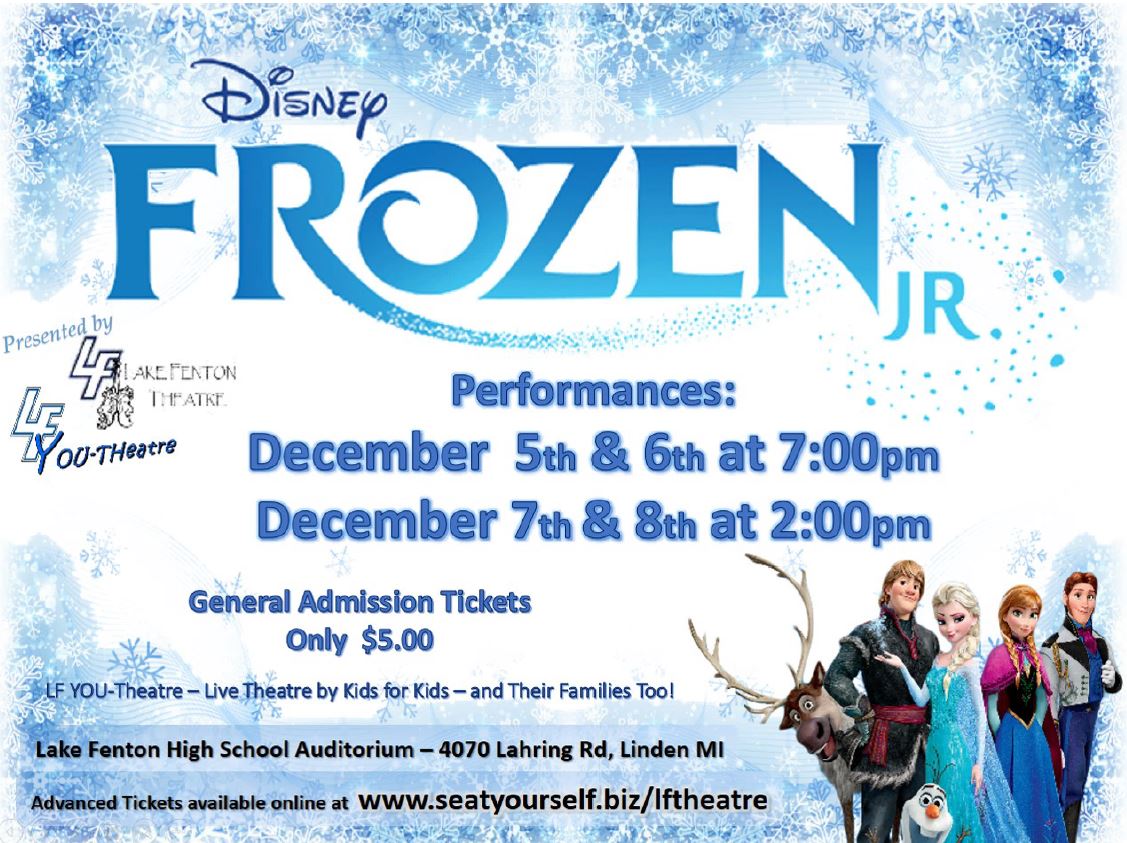 There are over 70 students from throughout the Lake Fenton School district including, Torrey Hill Intermediate School, the Middle School and the High School where students took on a dual role as student directors, choreographers, and technical and stage crews, as well as performers.

“This production has been a true collaboration of the ages,” Director Brenda LaBonte tells us. “We have had students who have stepped into leadership roles, directing scenes, creating and teaching choreography and helping backstage in both cast management, technical and stage crews. I am super proud of all of the efforts they have put forth both onstage and off.”

The play follows the storyline of the original film, breaking away from the classic narrative of true love between two characters, and focusing on a different love that often is overlooked in the modern-day.

“It breaks away from the Prince Charming saving the day in the end,” LaBonte said. “It’s about the sisters. It’s about that kind of love conquering all — not about romantic love, but rather love within a family. I think that resonates with people, especially at this time of year.”

Grand musicals like “Frozen Jr.” are designed for a large cast of youth actors, who are divided to lend their talents to particular segments of the play. In an adaptation like this, a great deal of the production is music, with the actors singing most of the show.

“We have the best music director in the area in our musical director, Rachel Solgat.” LaBonte said, “Our show wouldn’t be half as wonderful without her direction. She is amazing with the kids and her ability to bring out their musical talent is unmatched.”

The latter duo performs through much of the production.

The characters of Hans, the prince, and Kristoff, the iceman, are played by Max Stone and Brady Butzler, respectively.

Categorized as a junior musical, the play is designated by Music Theatre International as a show for actors 18 and younger and is staged and timed to appeal to the younger audience members. But have no doubt, this is a production with all of the bells and whistles of a full-scale musical presentation.

“Frozen Jr.” is presented at the Lake Fenton High School Auditorium and runs Thursday and Friday, December 5th and 6th with showtimes at 7 p.m and will perform again on Saturday, December 7th and Sunday, December 8th with 2 p.m. matinees.

General seating tickets are a family-friendly $5 per person and will be available at the door a half-hour before curtain. Advance tickets may be purchased online via the link at www.facebook.com/lftheatre or www.seatyourself.biz/lftheatre