For all of the hype generated over the Citrus Bowl matchup of Michigan vs. Alabama, the game failed to live up to its billing. While the Wolverines led 16-14 at halftime and at times looked to be controlling the tempo of the game, Alabama’s halftime defensive adjustments shut out Michigan in the 2nd half.

Alabama quarterback Mac Jones threw an 85-yard TD pass on the Crimson Tide’s 1st play of the game and added two more long throws of 42-yards and 20-yards to end the day 16 of 25 for 327-yards passing. On the opposite side of the ball, Michigan quarterback Shea Patterson failed to complete 50% of his passes going 17 of 37 for 233-yards and one touchdown vs. two interceptions.

The game ended with some controversy as ‘Bama coach Nick Saban called for a running play with just 00:31 seconds left in the game, instead of taking a knee and letting time expire. The two-yard touchdown run made the final score 35-16, inflating the Alabama margin of victory.

The relationship between the two coaches has been a bit frosty since 2016 when Michigan held football camps in the South. Saban publicly voiced his displeasure with the northern invasion into SEC recruiting territory. Harbaugh responded with some unkind comments about Alabama. Payback? Maybe, neither coach commented after the game.

In the New Year’s Day early game, the Outback Bowl from Tampa, FL featured another Big 10 vs SEC showdown. The Minnesota Golden Gophers took on the Auburn Tigers. The evenly matched teams traded scores right down to the final minutes when Minnesota quarterback Tanner Morgan completed a 4th and one pass to Bryce Witham keeping the Gophers winning drive alive. The pair had combined for a touchdown pass, also on 4th and one, earlier in the game. Final Score: Minnesota 31 – Auburn 24.

In what might have been the most entertaining game of the day, the 6th-ranked Oregon Ducks defeated the 8th-ranked Wisconsin Badgers 28 – 27 in the Rose Bowl from Pasadena.

In a game filled with huge momentum swings, Wisconsin was grinding towards a win when a fumble in their own territory midway through the 4th quarter gave Oregon a chance to turn the game around. It did not take long, Oregon quarterback Justin Herbert called his own number and ran for a 30-yard touchdown on the 1st play after the turnover. It was Herbert’s 3rd rushing TD of the game and gave the Ducks just enough swagger to hold on for the win.

Rose Bowl attendees were treated to a spectacular sunset as the California sky turned into a blue, pink and purple masterpiece late in the game. Television viewers at home watched as the unique reflective portion of the Oregon Ducks’ helmets mirrored the evening sky as seen in these pictures courtesy of https://twitter.com/YahooSports. 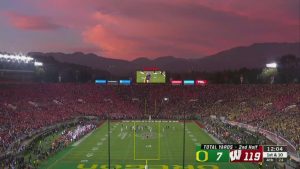 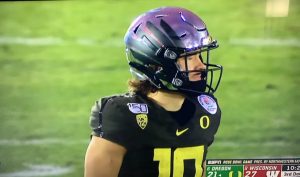 In the nightcap 5th-ranked Georgia faced #7 Baylor in the Sugar Bowl from New Orleans. The Bulldogs took a 19-0 lead into halftime and held on in the 2nd half to defeat the Bears 26-14. Baylor quarterback Charlie Brewer threw the ball 41 times but only completed 24 passes for 211-yards with one touchdown and 1 interception. Meanwhile, quarterback Jake Fromm was 20-30 for 250-yards and two scores as he led Georgia to the win.

College football is not quite done with its 150th season. Top-ranked LSU takes on 3rd-ranked Clemson, back in New Orleans, for the National Championship on Monday night January 13th. Former Ohio State coach Urban Myer and the Fox College Football analysts preview the keys to the game.

The game will be televised, starting at 8 pm, on ESPN.

Martin Treux Jr. Wins at Richmond and Advances to Next Round...

Indianapolis Supercross Gets Chippy in 250 SX