The Monster Energy AMA Supercross series opened their season in Angel Stadium of Anaheim Saturday night and the excitement is back. It did not take long for the action to heat up.

In 2019 Austin Forkner(52) won everything but the 250SX East Championship. A knee injury at Nashville took him out of the competition that weekend and he did further damage to the joint trying to ride the next week in New Jersey. After leading the points standings all year his year ended on a down note unable to ride for the remainder of the season. After recouping during the offseason, Forkner rode his first competitive moto in the season opener at Anaheim.

A crash during qualifying left him sprawled on the track and in need of attention from the medical staff. After an extended evaluation, Forkner was finally able to get up and walk off on his own. Not the way he wanted to start his year.

Forkner was able to make it to the starting gate for the 1st heat qualifier. But, encountered more trouble in an incident with Justin Cooper(32). Still, he made the main event easily finishing 3rd behind winner Cooper and runner-up Alex Martin(26).

In the 250SX Main event, Forkner grabbed the holeshot and led the first 11 laps of the race. Under pressure from Cooper, Forkner made a mistake and crashed into one of the trackside Tuff Blox in the rhythm lane section of the course. He quickly returned to the race but cut the course skipping the turn. After crossing the finish line in 3rd place behind Cooper and Ferrandis, Forkner was penalized two positions for shortening lap 12. The penalty dropped him to the 5th finishing position. Christian Craig(62) moved into the 3rd spot.

Ferrandis was 7th at the start of the feature event and could not work his way through traffic fast enough to make a run at Cooper. 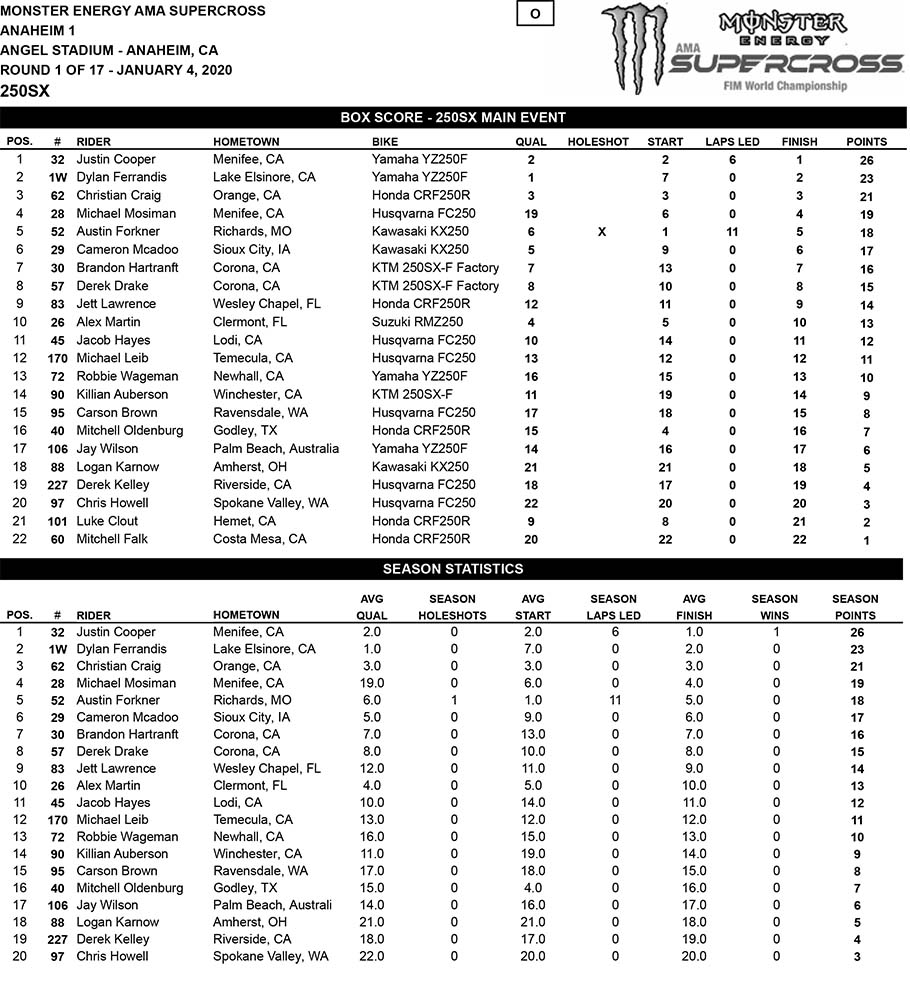 In heat one of the 450SX, Aaron Plessinger(7) crashed right out of the gate and did not complete a lap of the race. Plessinger limped off the track and it looked like one of the crowd favorites might be done for the night. He was able to get back on the bike for the 450SX last chance qualifier. Despite a poor start, Plessinger rode his way into the final qualifying spot just ahead of 5th place finisher Kyle Cunningham(44) by a mere 4/10’s of a second.

Justin Brayton(10) won the 1st heat, followed by Ken Roczen(94), Vince Friese(64), and Eli Tomac(3) in 4th. Heat two saw Justin Barcia(51) capture the victory over Adam Cianciarulo(9). The 2019 450SX Champion Cooper Webb(1) was suffering from the flu but still managed to make the podium with a 3rd place finish.

The 450SX Main event, Friese took the holeshot. But, Barcia led at the end of Lap 1. A mistake on Lap 8 allowed Cianciarulo to pass for the lead and it took seven laps for Barcia to regain the top spot. The pair were the class of the field with Barcia and Cianciarulo finishing 1-2.

Cooper Webb fought through his illness to take home 3rd place in an incredible display of toughness. Tomac finished 7th and Plessinger 12th. 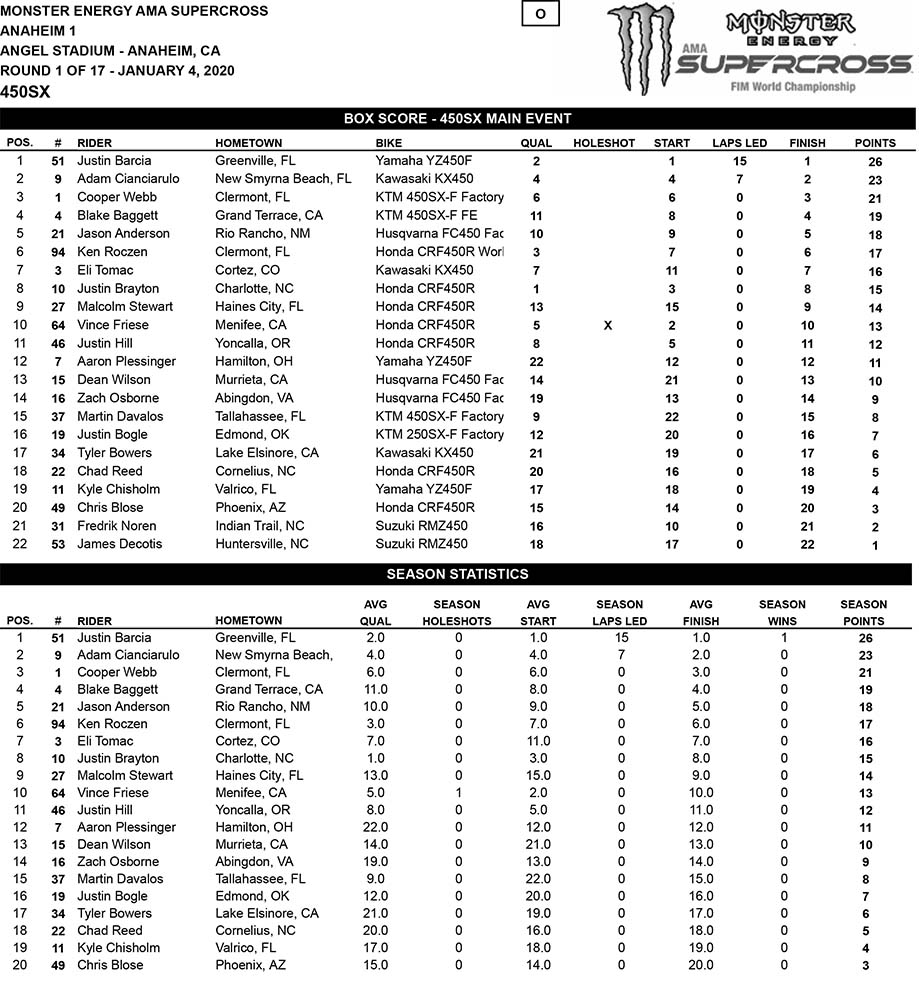 Next Saturday the series moves on to St. Louis as the West Coast riders grind it out for the next five weeks. For tickets to any of the upcoming events on the schedule visit the Monster Energy AMA Supercross web site to purchase online.