Three weeks into the 2020 Monster Energy Supercross season and 3 different winners in both the 250SX and 450SX classes. The return trip to Anaheim produced a thrilling finish in the 250 Main Event.

Austin Forkner(52), last week’s winner at St. Louis, picked up right where he left off. Storming out of the gate in the 250SX Heat 1. Forkner led every lap building his advantage over 2nd place Mitchell Oldenburg(40) to 10.9 seconds at the finish. Points leader Justin Cooper(32) finished in 3rd.

In Heat 2 last year’s West Champion Dylan Ferrandis(1W) was the fastest qualifier in the preliminaries. But, he got off to a slow start, was pinched up in the first turn and sat in 9th place on the 1st lap. Christian Craig(62) jumped into the lead and held it to the finish with Jett Lawrence(83) in 2nd and Ferrandis working his way up to 3rd.

The 250SX Main Event produced the best moto of the season to date. Craig grabbed the holeshot and led the 1st lap, with his teammate Lawrence hot on his rear wheel. Lawrence, the 16-year-old rookie originally from Australia, passed Craig on Lap 2 and riding like a champion built a lead of almost 12 seconds. Craig, unable to make ground on Lawrence, fell into the clutches of Ferrandis. The French rider hit a tuff block entering a turn and it sent him sideways across the track making contact with Craig taking down both riders.

Ferrandis was quickly back up on his bike, but Craig was slow to gather himself and ultimately left the race. This allowed Forkner back into the mix until he crashed in the whoops section of the track and could be seen grabbing his back in obvious pain. Slow to get back on his bike, Forkner faded and ultimately finished 17th.

Lawrence was maintaining a 10+ second advantage on Ferrandis until with three minutes left on the clock he made a mistake and dropped the bike out of a turn. Able to get back on and maintain the lead Lawrence seemed panicked and Ferrandis smelled blood. Lawrence quickly settled down and began turning fast lap times, but Ferrandis edged closer.

On the final lap, Ferrandis made the pass for the top spot. Lawrence fought back and almost regained the lead. Unfortunately, he overrode the section leading to the checkered flag and got the bike up on its front wheel over two jumps. He flew over the handlebars and landed hard on the final jump before the finish line. Ferrandis took the win, Lawrence broke his collarbone and finished 9th.

The victory was not without controversy as race officials reviewed the Ferrandis-Craig incident. But, ultimately decided no penalty was warranted. Fans booed the decision as Ferrandis celebrated on the podium. 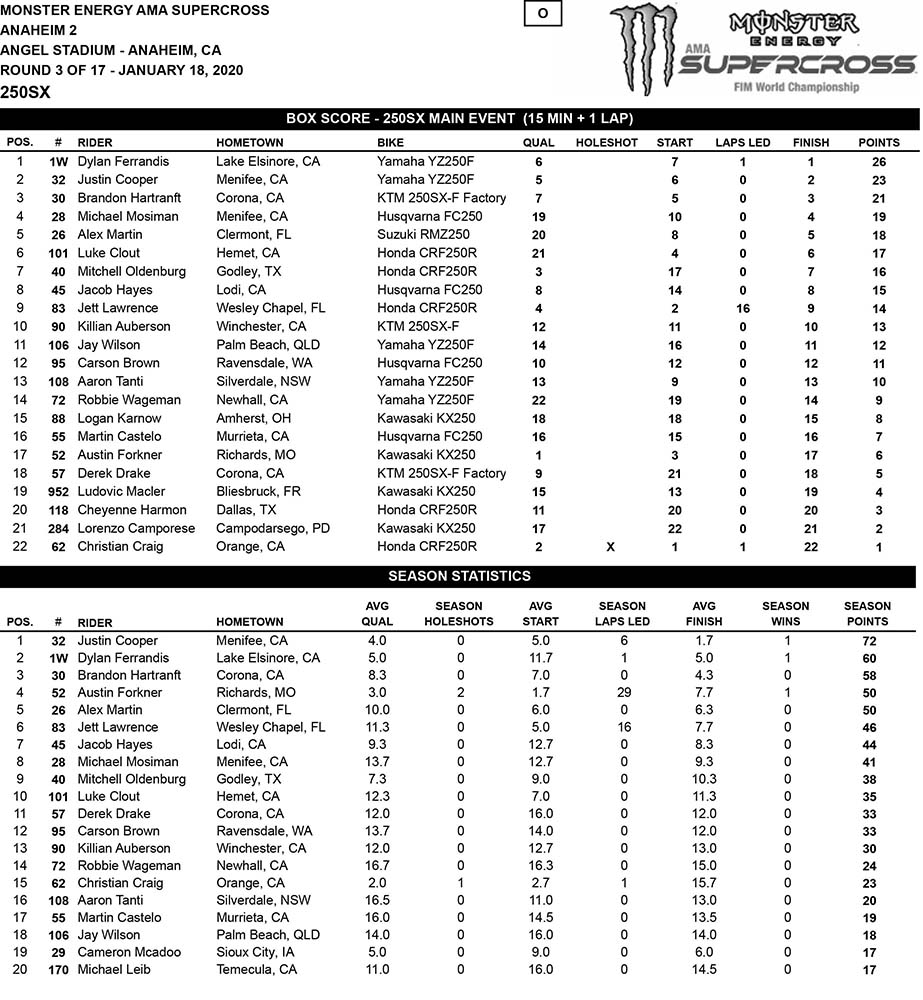 By comparison, the 450cc class was much calmer during the evening. Heat 1 saw Eli Tomac(3) taking the win. After battling early with series defending champion Cooper Webb(1), Tomac pulled away for the victory. Much to the delight of the fans of the ever-popular veteran.

In Heat 2, the top qualifier Adam Cianciarulo(9) took the early lead. Last week’s winner Ken Roczen(94), looking to make it two wins in a row, continued to ride in top form and took the heat win setting up for his attempt at back-to-back Finals.

In the Main event, Roczen fired out of the gate and took the holeshot ahead of the pack and looked like he would streak away to that 2nd win in a row. Blake Baggett(4) took a run at the top spot and passed Roczen briefly. While fighting for the lead, Baggett cut a turn too sharp and dropped the bike costing him a chance at the victory.

However, the repeat win was not to be as Tomac put on a show for the fans. Tracking Roczen down, Tomac took the lead and held on for his first win of the season. Pre-race favorite Justin Barcia(51), was never a factor as he finished 9th. As a result, the points standings tightened up with Roczen in 1st, Barcia 2nd, and Tomac 3rd, all separated by just five points. 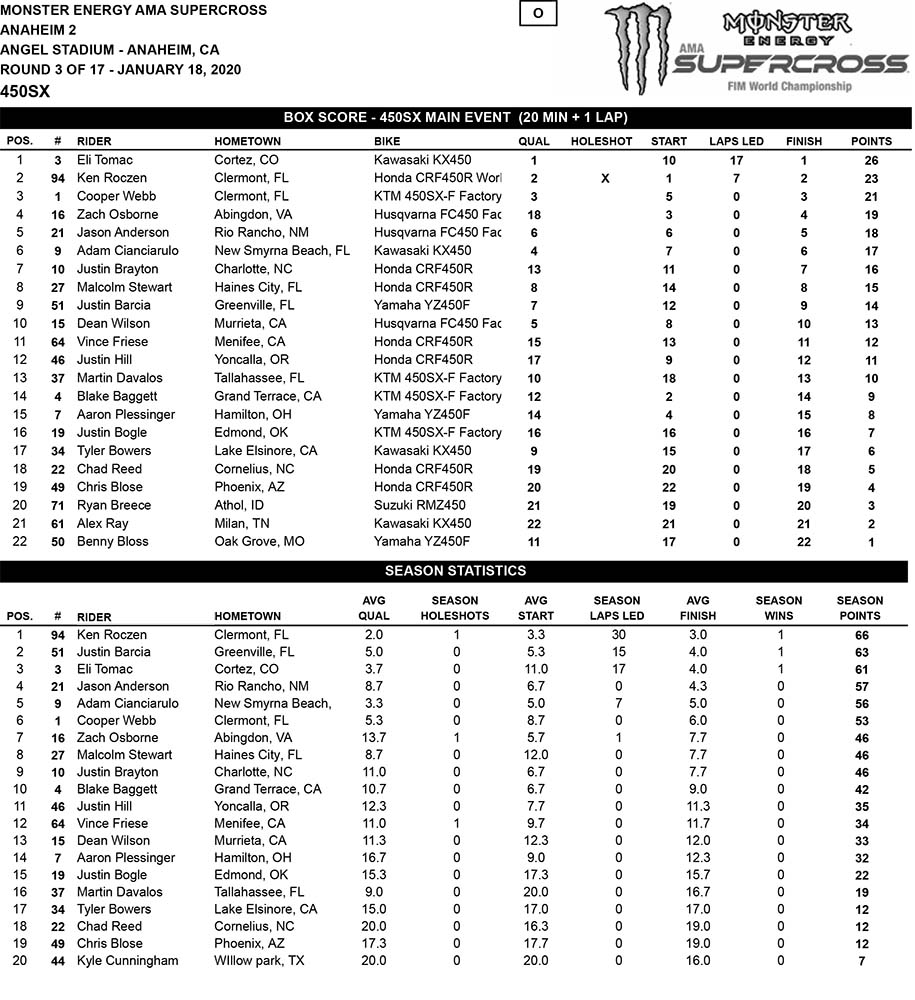 Next week the series moves to State Farm Stadium in Glendale, AZ for the first triple crown of the season in Round 4.

Larson Wins Again at Texas, Becomes the First Driver to Reach the Finals

Big One Happens Early in Daytona 500, Race Delayed by Rain