Saturday night in Arlington was a triple crown event for the Monster Energy Supercross series riders. In the 450SX division, Eli Tomac(3) was looking to build on the points lead after taking the red plate away from Ken Roczen(94) last week in Tampa. The 250SX East riders were looking to establish consistency in just their second event of the season.

In their only triple crown event of the year, the 250SX East riders were hot after the top spot in the first Main Event. Jordon Smith(54), Rj Hampshire(24), and Chase Sexton(1E) charged out of the gate and were three-wide coming across the holeshot line with Smith just edging out the other two riders.

Hampshire quickly moved to the lead with Sexton close behind. Sexton managed to work his way around Hampshire for the top spot and then the battle really heated up. Hampshire dove to the inside of Sexton on a sharp left-hand turn making contact and knocking the bike out from under the defending champion. Sexton went down hard and Hampshire rode away to the win.

Sexton got up to ride his way back into the second spot. Shane McElrath(12) had a bad start but managed to fight his way up to the third finishing position. Contact while passing Smith sent the holeshot winner off the course. But, Smith managed to hold on for the fourth place.

Not happy with being taken out by Hampshire, Sexton vowed to race him in the same fashion when future encounters occurred on the track. Metamora, Michigan’s Joey Crown(355) ran a solid race finishing seventh.

Things settled down a bit in Main Event 2 with Sexton going out to the early lead. More trouble for Jordan Smith as his night included crashes that sent him sprawling in the dirt. Joey Crown had a great start in the second Main, running as high as second and finishing with a fifth-place showing for the Michigan rookie. No one had anything for Sexton as he cruised to the win followed by McElrath and Jeremy Martin(6).

The battle for the overall victory came down to Sexton and McElrath. Out of the gate, the pair rode to the front with McElrath getting the holes shot. Riding away from the rest of the field McElrath took the win. Sexton captured the overall with his second-place finish. Hampshire finished third, his run included a takedown of Smith in a similar fashion to his incident with Sexton in Main 1. He is going to have several people gunning for him due to his aggressive riding early in the season. Joey Crown finished 10th in the third Main, but in the overall, he took home seventh place honors. 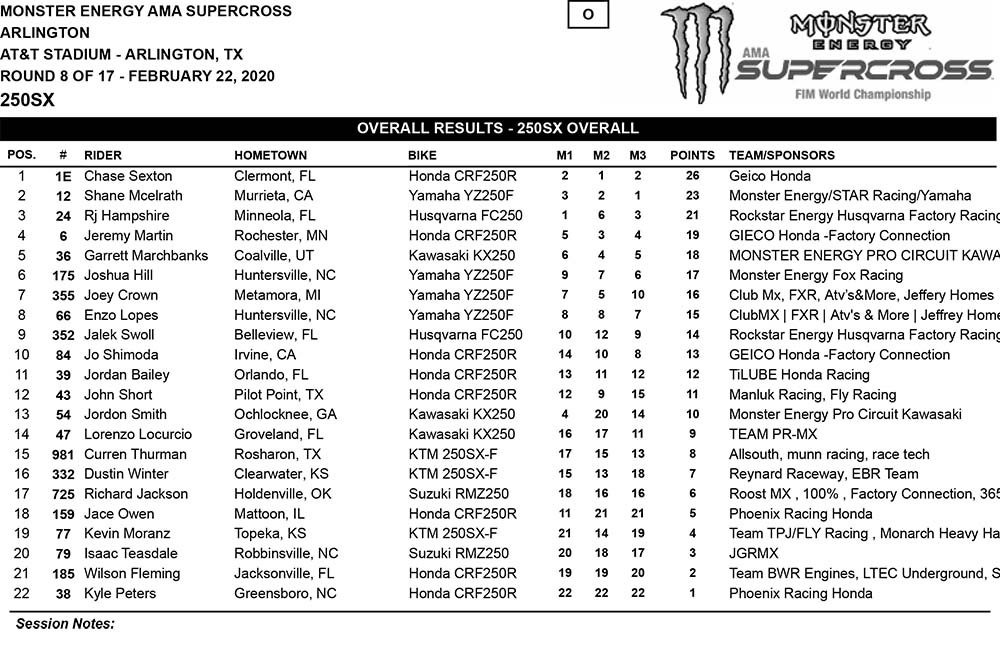 Eli Tomac has ridden multiple times with the red plate, emblematic of the points lead, but has never held it for long. After taking the plate from Roczen in Tampa, Tomac held a four-point lead over his rival. Would he be able to hold it in Arlington or give it back to Roczen?

Adam Cianciarulo took a nasty spill in timed practice early in the day. Flying over the handlebars and crashing headfirst into a jump, Adam broke his collarbone and was out for the evening. It’s doubtful Cianciarulo will mend fast enough to compete for the title this season. Hopefully, he makes it back to the track prior to the end of the year.

The night did not start well for Tomac. Slow out of the gate he was 13th as Cooper Webb(1) and Roczen fought for the lead. Eli rode his way up to fifth at the finish, while Roczen took the win and Webb finished second. After sweeping the triple crown races in Glendale, this was Roczen’s fourth consecutive win in triple crown events.

A much better start for Tomac in the second Main, he grabbed the lead on the first lap and rode to an uncontested victory. Roczen and Webb were mired back in the pack in ninth and 10th place after the start. Webb began to make some progress towards the front until catching a rut in the rhythm section and crashing badly. He was carrying so much speed he flew off the racing surface and landed hard on his back where the concrete floor of the stadium had no dirt covering.

Roczen could only manage a seventh-place finish, ending his triple crown win streak and setting up a match with Tomac for the overall winner of the evening.

The race for the overall title was just what the Texas fans were hoping for. Zach Osborne(16) went to the lead with Jason Anderson(21), looking to pull off an improbable upset, on his tail in second. Roczen was fourth and Tomac sixth in the early going.

With six laps to go the leaders ran Osborn, Anderson, Roczen, and Tomac in spots one through four. Then things got crazy, the leaders bunched up and Anderson went to the front. Tomac got past Roczen, only to be passed back for the third spot. Once again Tomac races past Roczen and this time makes it stick. Quickly he passes Osborn for second and takes off after leader Anderson. Eli must make the pass to assure him of the overall victory.

The Arlington track featured on of the longest whoops sections riders had seen this year and Tomac was masterful in negotiating his way through the rolling bumps. He passed Anderson and held onto the top spot for the overall win. Roczen took second and that was enough to also give him second overall. Anderson faded to fifth but still captured the final podium spot third overall. 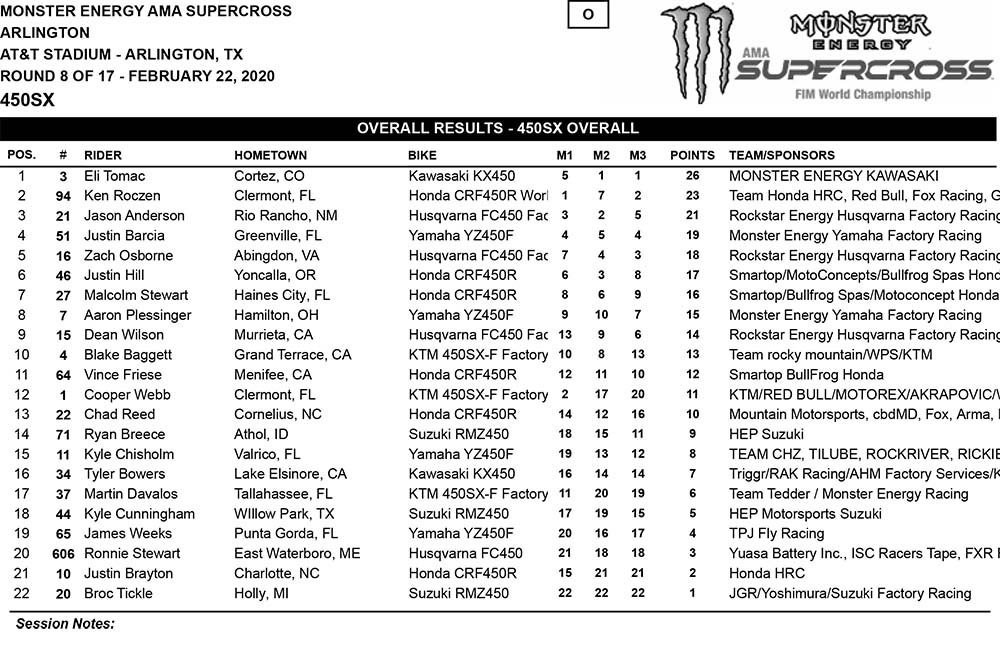 Tomac retained the season points lead, expanding it to seven over Roczen. Webb, who failed to start the third Main after his wicked crash in Main #2, sits third but is now 26 points behind Tomac. A deficit that will be difficult to make-up if Tomac and Roczen continue to pace the 450SX riders. Justin Barcia(51) closed to within one point of Webb, the defending champion, and could move up a spot if Webb is unable to recover from the hard hit on the concrete at AT&T Stadium.

Next week the series visits Atlanta before moving on to Daytona International Speedway for Round 10. Get your tickets now for the best seats in the house.