Qualifying for the Daytona 500 is unique. Times from Sunday’s single lap runs determine who sits on the front row for The Great American Race. NASCAR’s charter system guarantees 36 starting spots for teams that own a franchise. Four spots are open for independent teams to take. Two of those positions were awarded on Sunday’s times, one to 20-year-old Justin Haley(16) and one to 44-year-old Brendan Gaughan(62). Regardless of where they finish, they are in the show for Sunday.

Two more drivers will race their way into the field during the Bluegreen Vacations Duels. Daniel Suarez(96) hopes to be one of them. For the first time in his Cup career, Suarez does not have a guaranteed spot in the 500. Cole Custer(41) replaced him in one of Stewart-Haas Racing’s franchise cars and Suarez will try and qualify driving an entry for Gaunt Brothers Racing.

Competing with Suarez for one of the two final entries are Reed Sorenson(27) and Chad Finchum(49).  J.J. Yeley(54) and Timmy Hill(66) will compete for the other spot in Duel #2. Two guys make it, the other three go home for the weekend.

For the rest of the field, how they finish in their Duel determines where they will start on Sunday. Ricky Stenhouse Jr.(47) sits on the pole, Alex Bowman(88) will start beside him. Provided they don’t tear up their cars and have to go to a backup machine, they are locked into those positions.

If a driver has a problem in their Duel and is relegated to a starting spot deep in the field, it’s not the end of the world. If the Busch Clash last Sunday told us anything, it’s that you can go from the rear to the front. Almost as easily as you can go from the front to the rear if you get out of the draft. The real worry starting from 20th back is getting caught up in an accident as cars jockey for position.

Then again, accidents in the Clash started from the front of the pack. In past 500’s there have been some drivers who opted to go to the rear and make laps until late in the race, the strategy was to stay out of the “Big One,” that accident which takes out a large number of cars.

In the Clash, manufacturers teamed up at pit stops to make sure they drafted as a pack. Expect that to be the norm for both the duels and the 500.

Ready to go racing and Mother Nature drenches the track. Bring out the jet driers and prepare for a long night.

Stenhouse drove into Turn 1 with the lead and proved his qualifying speed was no fluke. Drivers raced side-by-side for the first 10 laps until a shuffle at the front caught Denny Hamlin(11) in the middle lane. He dropped to the back of the pack while the field finally strung out into a single line.

Stenhouse picked up a large piece of debris on the nose of his car. He will have to monitor his water temperature to prevent damage to the engine from overheating. An engine change would forfeit his front-row starting spot.

By Lap 20, Suarez had worked his way up to the top 10, seven spots ahead of Reed Sorenson, Finchum was already a lap down.

The Chevrolets all came to pit road on Lap 24, fuel only and a clean grille for Stenhouse. The Toyotas came on the next lap and Martin Truex Jr.(19) missed his pit box. The error cost him too much time and he lost a lap to the field.

Clint Bowyer(14) inherited the lead for the Ford contingent, who continued to turn laps. Suarez had just been put a lap down when the Fords headed for pit road on Lap 31. He got tangled up with Ryan Blaney(12) and wrecked into the outside wall. Suarez car came to rest in the tri-oval, his chances of making the field dashed in the accident.

In a quirk of the rules, the pit road was closed due to the yellow flag being displayed. The Fords had already committed to coming in. When that happens drivers are supposed to continue through pit road without stopping.

Blaney’s crew was able to repair the nose of his Ford Mustang but lost two laps in the process. Sorenson sits at the tail of the lead lap, with Suarez out and Finchum three laps down he only needs to keep his car out of trouble and he will start on Sunday. Bowyer, Joey Gase(51), and Chris Buescher(17) stopped for service and were penalized by having to start at the rear of the field when the green came back out.

After the restart, Joey Logano(22), Austin Dillon(3), and Stenhouse swapped the lead until Logano made it to the bottom of the track with Aric Almirola in his tracks. Ryan Newman(6), Brad Keselowski(2), Bowyer and Buescher all got in line and the Mustang brigade pulled away dropping the field into a single file line.

With six laps to go, Stenhouse, Hamlin, Chase Elliott(9), and Christopher Bell(95) dropped to the bottom to make a run at the top spot. Stenhouse has a fast car, and he led the group to the front. But, Logano with a push from Almirola, took the race win.

Fords took the top four positions with Newman and Keselowski coming across in 3rd and 4th. Bubba Wallace, driving for the King, scored the #43 in 5th.

Results of the Bluegreen Vacations Duel 1

Sorenson made the Daytona 500 field, Finchum and Suarez will pack up and head home.

Side-by-side racing lasted a bit longer in Duel #2. Kevin Harvick(4) worked his way to the bottom of the track and with a push from Matt DiBenedetto(21) took the lead away from Alex Bowman(88). Only to see Bowman fight back and retake the top spot on Lap 16, which caused the field to form up in a single file line.

The Chevrolets pitted on Lap 23, the Fords and Toyotas pitted on Lap 33. After pit stops cycled through Harvick led, followed by Kyle Busch(18), DiBenedetto, David Ragan(36), and Erik Jones(20). They held a five-second advantage on the Chevrolets that pitted first.

Yeley and Hill continued to battle for position and the final transfer spot. Down the backstretch, Corie LaJoie tapped the rear bumper of Yeley and turned him into the wall. The damage to Yeley’s car took him out of the race and out of the 500. Hill will advance to Sunday’s race while Yeley heads home.

The leading pack of Fords and Toyotas stayed on track while everyone else came to pit road getting four tires and fuel.  The same top 5 will bring the pack to the green flag for the restart.

Back to racing with 12 laps to go. Harvick, with a big push from DiBenedetto, moved away from the pack and led the pack into single file order. With five laps to go, it was Harvick, DiBenedetto, Jones, William Byron(24), and Kurt Busch(1).

With three to go, Byron pulled out and led a jumble of the top five. Byron held on for the win followed by Jimmie Johnson(48) and Kyle Larson(42). The rest of the field raced three-wide for three-rows fighting for every position.

Results of the Bluegreen Vacations Duel 2 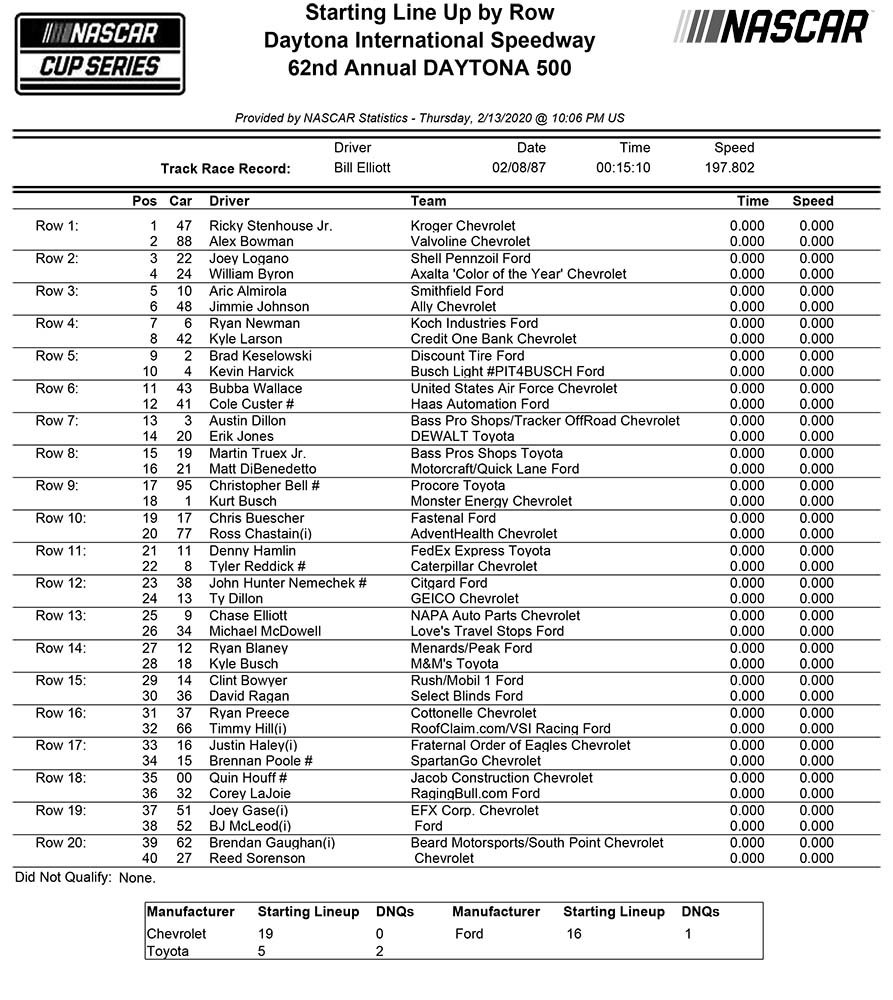 NASCAR is Racing at MIS With Fans in Attendance This Weekend