The sixth round of the Monster Energy AMA Supercross series wrapped up the West Coast swing of the circuit and the 250SX riders will now take a six-week break while the boys back east fire up their season. Last year’s 250SX champion, Dylan Ferrandis(1W) opened up a bit of a gap in the point standings to enter the downtime with a lead on second-place Justin Cooper.

Austin Forkner(52) opened the evening in the first heat of the 250 class looking like he was the man to beat this week. Cameron Mcadoo(29) grabbed the holeshot but was quickly passed by Forkner, who went on to build a massive lead and take the victory uncontested.

In Heat #2 Justin Cooper(32) started quickly and held the early lead. Dylan Ferrandis, the defending champion, and current points leader overtook Copper and established a comfortable interval between the two. Cooper seemed to fade somewhat after the Ferarandis pass, and could not hold the position. Michael Mosiman(28) snuck by on the final lap to take second place.

A spectacular ride by Brysen Gardner(837), the rookie who had just earned his professional card out of the Future’s program took the ninth spot to make the Main Event.

In the 250SX main event, Forkner earned the holeshot but Mosiman led at the end of the first lap. Forkner, Ferrandis, and Cooper lined up 2, 3, & 4 in what looked like a battle royal for the top spot in the points. Mosiman led the first four laps before Forkner retook the lead for the next 11 trips around the tough San Diego track.

Ferrandis passed Mosiman and set his sites on Forkner, passing him four laps from the finish. The move, coming out of a corner and getting alongside Forkner forced Forkner off the track, but no contact was made on the clean side-to-side racing.

Ferrandis went on to take the win with Forkner in second. Cooper passed Mosiman to earn the third podium spot. However, the victory allowed Ferrandis to stretch his slim two-point lead over Forkner into a seven-point advantage. While Cooper sits 13 back entering the six-week break. 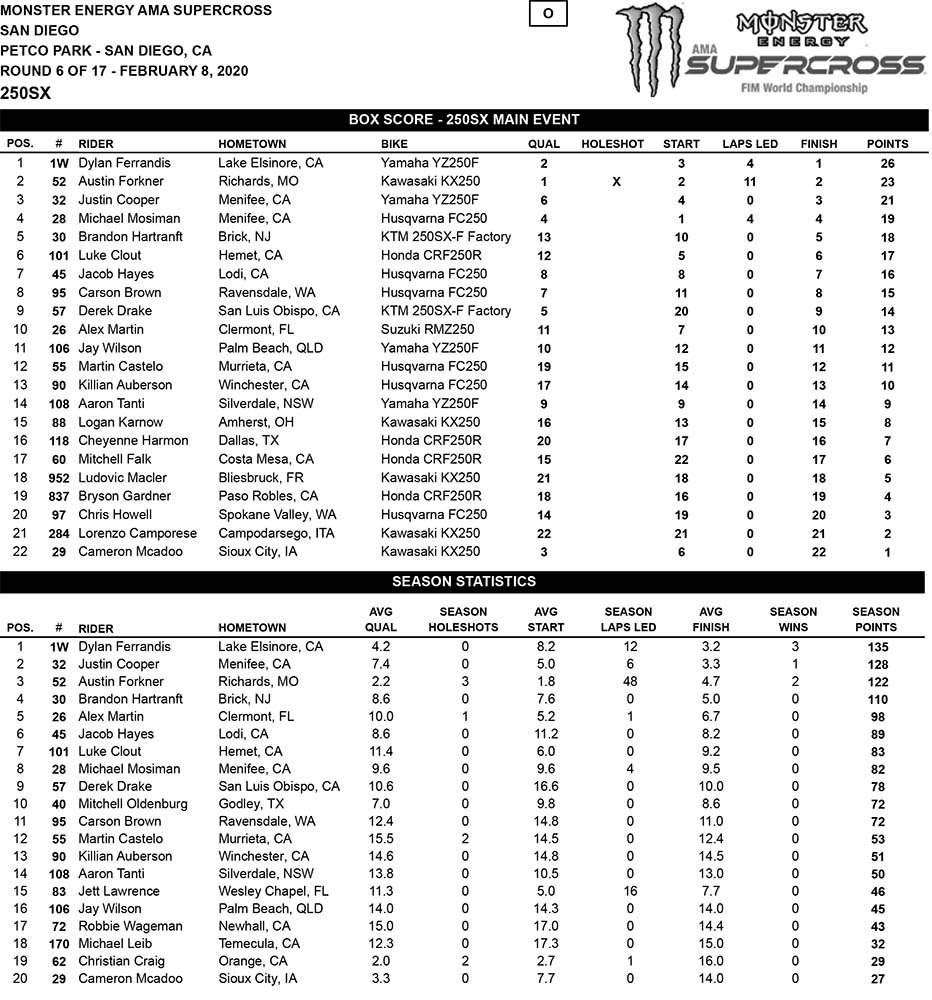 Ken Roczen(94) rocketed out of the gate in Heat #1 for the 450SX class. He led the entire moto, winning by a large margin. Defending Champion Cooper Webb(1) hit a big dirt clod dislodged by a rider in front of him and went down on the opening lap. He sat 13th after the first circuit. Webb was not the only rider to face a difficult start, Eli Tomac(3), the other rider in the hunt for the points lead, was ninth at the of Lap 1. Tomac fought his way up to third and Webb to sixth, qualifying for the main event, but it was not an easy ride for either rider.

In Heat #2 Adam Cianciarulo(9) took the holeshot and ran away from the pack to win wire-to-wire in a comfortable fashion.

In the 450SX main event, Webb took the point, until Cianciarulo passed him to score as the nan out front after Lap 1. The points leaders, Roczen and Tomac were mired back in ninth and 10th respectively. Webb stayed patient, rode a smart race and ultimately passed Cianciarulo at the two minutes remaining mark.

Roczen could only manage a sixth-place finish, Tomac rode up into fourth. Now the 450SX points battle is a hot race.

Roczen’s lead has been cut to a single point with Tomac lurking. Webb in nine points back in third and can see the leaders in sight. Justin Barcia(51) and Cianciarulo occupy the fourth and fifth spots. With Barcia 14 points off the lead and Cianciarulo just 17 back. 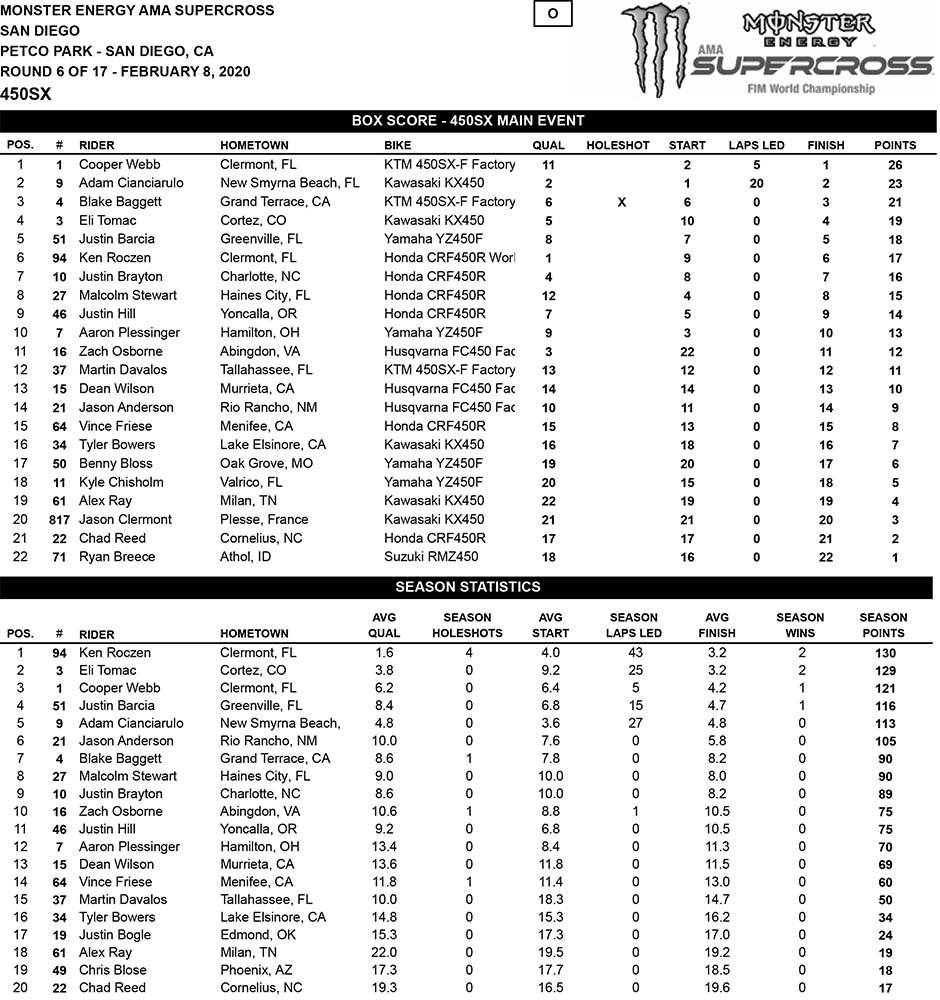 Next week in the first event for the East Coast 250SX riders the series stops in Tampa. The Lasco Press will be LIVE to bring you all the action from Raymond James Stadium. Tickets are still available for Saturday night action. See ya at the track.