The names of the men that are enshrined in the NASCAR Hall of Fame are icons that built the sport from its grassroots on the short tracks of the South to the superspeedways of today. Five more men joined that prestigious group tonight in Charlotte, NC. The NASCAR Hall of Fame Induction Ceremony brought Buddy Baker, Joe Gibbs, Bobby Labonte, Tony Stewart, and Waddell Wilson into the commemorative house of stock car racing. 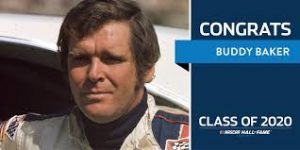 Know as the “Gentle Giant,” Buddy Baker was a bigger than life NASCAR hero. At six feet, six inches tall he was an imposing figure with a loveable big bear personality. Except when you put him behind the wheel of a race car. He drove one way, with his foot on the accelerator mashed to the floor. Baker was the first driver to eclipse the 200-mph on a closed course at Talladega Superspeedway. He loved the big fast track, winning there four times during his career.

Universally known as “Coach,” Joe Gibbs is one of the most loved men in the NASCAR garage. The respect he receives is not because he is a member of the NFL Hall of Fame, and now holds the same honor in NASCAR, it’s because he is the ultimate gentleman. Everyone he meets walks away feeling they just made a new friend.

In January of 2019, Joe Gibbs lost his son J.D. Gibbs to a neurological disease. A strong man of faith, Gibbs refers frequently to his son being in Heaven with the Lord. A month later at the Daytona 500, his race team took the top 3 finishing positions with Denny Hamlin pulling off the win. Hamlin’s car number “11” was JD’s number when he played football. Hamlin’s car carried JD’s name above the door. The two were good friends.

The 2019 season concluded with all four JGR drivers making the playoffs and Kyle Busch winning the NASCAR Cup Championship. The team notched 19 wins among its four drivers, a NASCAR record in the modern era. Now two weeks before the 2020 season, Gibbs enters the NASCAR Hall of Fame. Some would say J.D. Gibbs has some powerful friends in his new sphere of existence.

Bobby Labonte was the first of four drivers to win a NASCAR Xfinity Series (1991) and NASCAR Cup Series (2000) championship. In 729 NASCAR Cup Series starts, he recorded 21 wins, 115 top fives, and 203 top 10s. During his 2000 Cup championship season, Labonte excelled on the biggest stages, earning two of his four wins in the Brickyard 400 and the Southern 500. He finished 255 points ahead of second-place Dale Earnhardt for the series crown. Labonte joins his brother Terry – a 2016 inductee – in the NASCAR Hall of Fame.

“I must thank the France family and NASCAR because as far back as I can remember, I wanted to race in NASCAR,” Labonte said. “I didn’t race to be in the Hall of Fame, I just wanted to race.” Labonte paid tribute to his brother who preceded him into the Hall. “The tie I am wearing tonight is the same tie Terry wore when he was inducted.”

Later in the media center, Bobby was asked how he knew that was the same tie? “He left it at my house after the party. He’s always doing something like that. Most of the time I just wrap whatever it is up and give it back to him as a gift.”

Nicknamed “The People’s Champion,” for his blue-collar attitude toward racing, Tony Stewart earned three NASCAR Cup Series championships. Two of his titles came for Joe Gibbs Racing (2002, 2005). His third title, in 2011, came as a driver-owner with his co-owned Stewart-Haas Racing team. A versatile driver, Stewart racked up 49 Cup wins – visiting Victory Lane on every style of track. He is best known for his clutch performance in 2011 when he won five of the 10 Playoff races – including the season finale – to win his third championship via tiebreaker over Carl Edwards. Stewart added a second owner championship with Kevin Harvick in 2015.

“I’m one of just 55 people to be inducted into the NASCAR Hall of Fame,” Stewart said. “And, considering that NASCAR has been around for more than 70 years, that’s kind of nuts. It truly is an elite group, and it’s incredibly humbling to be a part of it.”

Stewart, Labonte, and Joe Gibbs all shared a special bond from their time together at JGR. There was a lot of talk through the evening about family, especially with the Labonte brothers now enshrined together. Stewart ended his acceptance speech with a callout to some special people he was fond of. “And since we are talking about family – since I don’t have one of my own – I’d be remiss if I didn’t thank all the girlfriends who were a part of this journey with me. Your short time and sacrifice meant a lot to me.” Pure Tony Stewart!

A dual-threat as an engine builder and crew chief, Waddell Wilson provided the power to some of the greatest drivers to ever live, including NASCAR Hall of Famers Baker, David Pearson, Fireball Roberts, Bobby Allison, Cale Yarborough, and Darrell Waltrip. As an engine builder, he won three Cup championships (David Pearson, 1968 and 1969; Benny Parson, 1993), 109 races and 123 poles. As a crew chief, Wilson guided his drivers to 22 wins, including three Daytona 500 victories (Buddy Baker, 1980; Cale Yarborough, 1983 and 1984).

“I love racing and I appreciate the fans and all their support throughout these years,” Wilson said. “It’s an unbelievable honor to go into the NASCAR Hall of Fame, it’s a humbling night for me and my family.”

Wilson spent much of the evening regaling everyone with the stories of his life in racing. He was the last to visit the Media Center and kept the press enthralled with inside details of many aspects of his career.

In addition to the five inductees enshrined, Edsel Ford II was honored as the sixth recipient of the Landmark Award for Outstanding Contributions to NASCAR.

A member of the Ford Motor Company Board of Directors and longtime executive of the company founded by his great-grandfather Henry Ford, Edsel Ford is always at the track checking on the Ford teams. His support of NASCAR has helped increase the level of competition throughout the industry. His leadership at Ford includes time as president and chief operating officer (May 1991-1998) and a director of International Speedway Corporation (Nov. 2007-Oct. 2015). Edsel is known as “The Godfather” of Ford’s racing program. He is on the Voting Panel for the NASCAR Hall of Fame.

Prior to the Induction Ceremony, former pit reporter and magazine editor Dick Berggren was presented the eighth Squier-Hall Award for NASCAR Media Excellence.

A college professor by trade, Berggren reported from the NASCAR garage on television from 1981 through his retirement in 2012. He started his broadcast career as a reporter for ESPN and appeared on CBS, TBS and TNN NASCAR coverage before finishing his career with a 12-year stint as FOX’s lead pit reporter. A passionate supporter of grassroots short-track racing, Berggren also served as the editor of both Stock Car Racing and Open Wheel magazines. He founded Speedway Illustrated, which coined itself as “America’s favorite monthly short-track racing magazine.”