The 2020 basketball season was not that friendly to the Tigers of Jackson State University. They entered Monday night’s contest with the Arkansas-Pine Bluff Golden Lions having posted an 11-17 record for the year. It was the Tigers’ last home game of the season, no dreams of NCAA tournament glory here. But, there was still pride to play for. It was also Senior’s Night and the team hoped to end their home schedule on a winning note. They did, the final score a 76-56 blowout over Arkansas-Pine Bluff.

The large lead in the game gave coach Wayne Brent the opportunity to bring in some players who normally don’t see much game time. One of the players was the team’s student manager Thomas Lee. Thomas’ nickname is “Snacks,” check out the picture below and you might understand why. He had never suited up for a game before, this was to be his night.

Coming into the game with two minutes left to play, Thomas’ teammates fed him the ball. He missed his first three shots. Then lightning struck, with seconds left Thomas took a pass from another of his guys. Standing well outside the NBA three-point line, Thomas took his shot. Whoosh, nothing but net. The place went wild, Thomas celebrated with, his teammates, celebrated with the fans, and forgot to play defense. He became an instant celebrity, even getting a shout on Twitter from his favorite player Kevin Durant.

Fortunately, the scene was captured on video, here is the replay.

Topping off the event, “Snacks” was named the Southwestern Athletic Conference Men’s Basketball Player of the Week. Not bad for a lifetime 1-4 shooter. 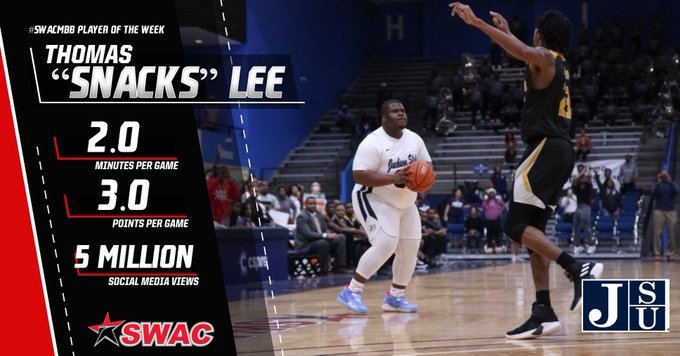 eNASCAR to Race This Sunday at Texas Virtual Speedway