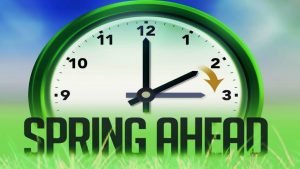 It’s that dreaded weekend when we all lose an hour of sleep. Daylight Savings Time(DST) goes into effect this coming Sunday morning March 8, 2020, at 2 am. While sacrificing an hour of sleep is not something many people want to do, the longer daylight hours in the evening are the advantage of the time change.

There have been many attempts to make DST a year-round fixture, but no federal congressional action has passed that would enact such a change nationwide. The current law does allow states the option of choosing for themselves whether to observe DST. Two states, Hawaii and Arizona currently exempt themselves from participating in the practice.

Indiana did not observe DST until a state law made it mandatory in 2008. The Hoosier State already has two time zones which can cause some confusion, especially for travelers. Prior to the edict 12 years ago, some counties reset their clocks, others did not. You needed a scorecard to keep track of where you were, what time it was, and a watch that reset easily. What a mess.

An old Indian saying states. “Only the government would believe that you could cut a foot off the top of a blanket, sew it to the bottom, and have a longer blanket.” He must have been an Indiana Indian.

Do Roosters Change Their Crowing Schedule

Most people just roll with the change, our body clocks adapt rather quickly to a different time pattern. If you are one of those people that struggle with that hour difference, the good news is you gain that hour back on Sunday, November 1, 2020.

Don’t blame farmers for the practice of DST. They pretty much work dawn to dusk anyway. Germany first activated the time change to make munition factories more productive during the First World War. The time change was discontinued after the conclusion of the conflict.

The United States instituted DST during World War Two but it did not formally adopt its full-time use until 1966, when the Uniform Time Act was passed into law.

I am all for leaving DST in place for the entire year. While it’s easier to adjust to “falling back” in November, maybe those long winter nights would not seem so cold if they started an hour later. Does that jive with the Indian blanket thought process?