Special things happen at “The World Center of Racing,” Saturday night’s Monster Energy Supercross event celebrated the 50th anniversary of Supercross motorcycle racing at Daytona International Speedway. The fans got to see some great on-track action topped off by one of their favorite riders staging an improbable comeback to win his Main Event.

Shane McElrath(12) continues his pursuit of 250SX series points leader and last year’s East Coast Champion, Chase Sexton(1E). Taking the holeshot in Heat 1, McElrath led the entire moto. It was an easy win as McElrath crossed the finish line 10 seconds ahead of Jordan Smith(54). RJ Hampshire(24) crashed on the start but recovered to place 6th and advance to the Main.

A brutal crash on Lap 1 of the 2nd Heat saw Nick Gaines(68) hit the dirt hard and then get run into by Sexton as he was trying to recover. The incident put Gaines out for the evening and dropped Sexton out of the top 10 in his heat.

Garrett Marchbanks(36) took the heat win and Sexton managed to ride his way back up to the 3rd position at the finish.

In the 250SX main event, it was all Marchbanks as he grabbed the holeshot and rode away with the victory holding off Sexton at the finish. Jeremy Martin(6) earned the final podium spot just ahead of Hampshire with a late pass. McElrath placed 5th after an early altercation with Jordan Smith. The two traded positions in consecutive corners early in the moto before contact sent both riders down and Smith limping off injured.

The win was Marchbanks first on the Supercross circuit. Sexton stretched his points lead to 10 over McElrath and Marchbank’s win vaulted him to 4th in the standings.

Eli Tomac(3) and Ken Roczen(94) came to Daytona both holding the red plate tied for the points lead in the 450SX division. Tomac was considered the favorite on the basis of his three previous wins at the track.

Heat 1 went according to form, even though Aaron Plessinger(7) got the holeshot with Justin Barcia(51) close behind, Roczen moved to the lead early and dominated. In Heat 2, defending series champion, Cooper Webb(1) led at the end of Lap 1 followed by Jason Anderson(21) and Tomac. The trio rode that way from start to finish.

The Main Event matched the points leaders in the race the fans came to see. Anderson captured the holeshot with Roczen just behind him. Webb was 5th and Tomac 6th off the start. Barcia and Plessinger ahead of them in the 3rd and 4th positions. Roczen quickly took the lead and with four very good riders in front of him, Tomac had some work to do if he was going to challenge Roczen.

Plessinger began to fade and Barcia was the first to succumb to the pressure, going down in a corner, being passed by Webb and Tomac. Webb moved to 2nd, passing Anderson, but trailed Roczen by 7-seconds. Webb had cut the deficit to 5-seconds when Tomac began to make his ride to the front. With 9-minutes left, he was 3rd and joined Webb in the chase after the leader. Under 6-minutes and Tomac passes Webb, a minute later and the lead is down to 4-seconds. With 4-minutes to go the interval to Roczen is 2-seconds, then with just under 3 minutes to go, Tomac is on Roczen’s tailpipe.

With every pass that Tomac makes the Daytona crowd cheers loudly. As he follows Roczen around the track the grandstands are a frenzy. Roczen bobbles and hits a tuff block, Tomac goes by for the lead. Winning once at Daytona is a huge accomplishment for a Supercross rider. To win four times is astonishing. Tomac only trails the Greatest of All-Time, Ricky Carmichael, by 1 Daytona victory. If Eli can garner his first Supercross Championship this year and return to Daytona with a chance to tie Carmichael’s record of five victories there, he might cement himself a place in motorcycle racing history.

The red plate will be Tomac’s alone as the series rides into Indianapolis. Tickets are going fast, grab a seat at Supercross Live. The Lasco Press will be in Lucas Oil Stadium next week to bring you all the action. Then the following week Detroit plays host with back-to-back weeks of Live Coverage from our motorsports team reporters. 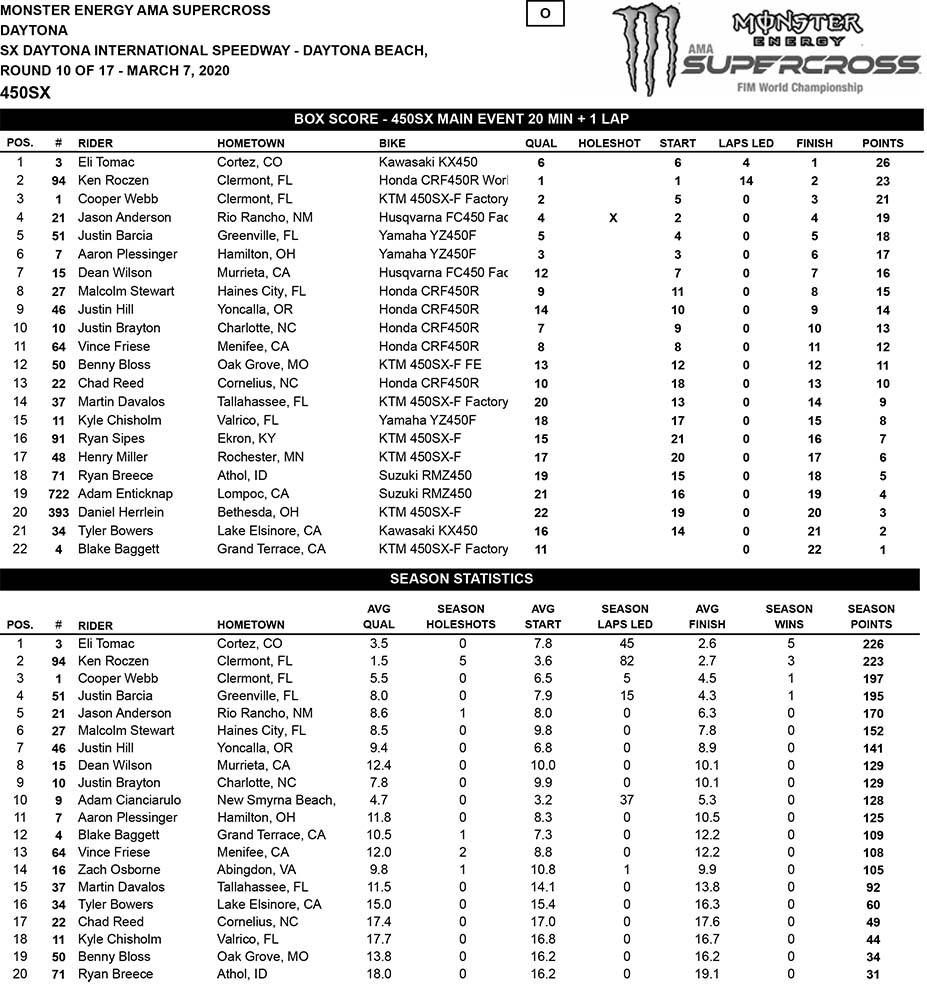