If you watched Fox Sports broadcast Sunday of the eNASCAR iRacing Pro Invitational Series at Virtual Texas Motor Speedway you probably realize it’s not quite as good as real cars on the track. But, given the circumstances, it’s a whole lot of fun. NASCAR Cup Series driver Timmy Hill(66) won with a late-race pass in classic bump-and-run style. After being out front for 80 laps during the O’Reilly Auto Parts 125, William Byron(24) got booted out of the lead and Hill held on to take the victory.

Hill drives the #66 MBM Motorsports Car on the Cup circuit. Never a winner in NASCAR’s premier level, Hill was the 2011 Xfinity Series Rookie of the Year. Widely known in eNASCAR, Hill has 674 wins in 1677 career iRacing starts.

Like his regular Sunday ride, Hill’s iRacing setup is a low budget operation. According to NASCAR.com, Hill estimates his wheel cost him $300. It’s mounted to a $75 desk he got at a local office store. He sits in a $100 chair coordinating his race on a gaming computer that cost him about $1,400 … But, he noted, it’s his primary laptop computer and he doesn’t just use it for iRacing but for everything — from running his NASCAR Gander RV & Outdoors Series team to filling out a personal tax return.

So You Want to Go iRacing

Do you envision yourself competing on virtual racetracks around the eNASCAR event circuit? Well, hold on before you go out and purchase that steering wheel and foot pedals. Here is a reprint of a NASCAR.com article by Steve Luvender. There is more to the sport than you might think. Still, it is possible and you might be an overachiever.

What You Need to Know About Getting Started with iRacing

This might be obvious, but let’s be clear: iRacing is not only an exceptional racing simulation, it is just as much a competition service. It’s a massive multiplayer online racing community. Generally, iRacers are serious about racing; not to gatekeep, but iRacing isn’t a grab-off-the-shelf-and-drive-backward-into-the-other-cars-then-reset-and-do-it-again sort of thing.

You’ll be connected to the Internet at all times. You’re racing against real people who are also trying to prove themselves or experience the thrill of racing. You’ll make friends and enemies. Maybe you’ll make a name for yourself.

There are more than 100,000 active subscribers on iRacing from all over the world and racing all disciplines of cars. While there are dozens of NASCAR stars competing, there are also Formula 1 drivers, dirt-racing phenoms, open-wheel standouts, rallycross daredevils and just about any other type of racer you can think of.

iRacing exists only on the PC platform. That means no consoles and no mobile devices; you’ll need a computer. Most computers built within the past couple of years, particularly those labeled “gaming computers,” should fit the bill just fine.

iRacing’s System Requirements page is a good reference for your computer’s technical specifications. For the most part, iRacing can handle a decent range of PCs, but the tighter your budget, the fewer graphical treats like advanced shadows, reflections, and trackside objects you’ll see.

You’ll also need a racing wheel and pedals, just like a real race car — imagine that! The Logitech G29 is the go-to entry-level wheel-and-pedals combination. It’s got all the bells and whistles and it’s quite reliable. It’s available online and in big box stores, and probably the best bang for the buck. Other popular wheel-and-pedal manufacturers include Thrustmaster and Fanatec, and there are dozens more at higher price points. For most racers, though, the Logitech is a fine wheel.

While you’ll definitely, definitely want to race with a steering wheel and pedals, technically, you can race with a traditional Xbox or PlayStation controller. You’ll probably have a very tough time, however. iRacing is not a forgiving sim, and you’ll want precise inputs from your steering, throttle, and brake.

Adaptive controls are also available for drivers with physical challenges. In terms of equipment, yes, there’s a bit of an investment and quite a bit of range. 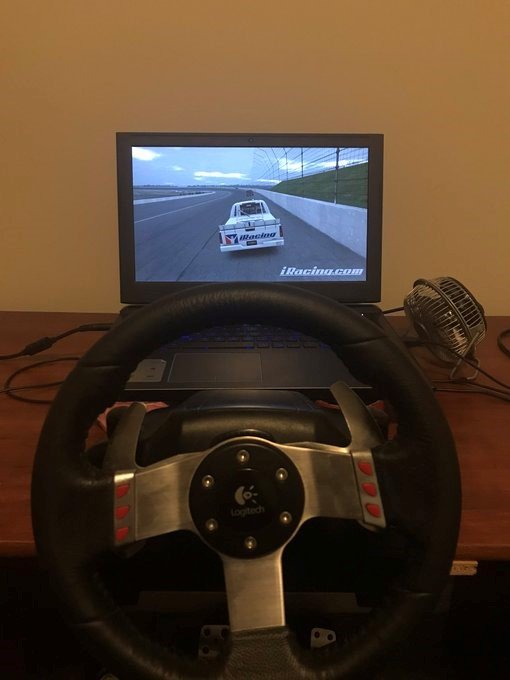 Ty Majeski is the highest-ranked oval iRacer in the world, and he races on a single-screen laptop with an off-the-shelf Logitech wheel and a miniature table fan.

Both the Majeski and Hamlin setups put you on the same virtual track and competing for the same races. What happens in the virtual world is up to the driver’s skill.
You’ll also need a high-speed Internet connection. A WiFi hotspot from your phone won’t cut it. The better your connection speed, the more reliable and predictable cars will appear on the screen. When you’re racing close-quarters, this is important.
If you’ve got a headset and microphone, you can also communicate with fellow racers or teammates, though it’s not a requirement.

When you join iRacing, you’re required to use your real name — no screen names or anonymity here. Because of that, there’s built-in accountability: you only get one reputation tied to your name.

This level of accountability also means you can’t just crash into people intentionally without repercussions. iRacing takes competition issues very seriously — it’s a necessity for the merit of the service — and you might find yourself taking a vacation involuntarily if you’re a menace. Generally speaking, the iRacing Sporting Code isn’t too lenient, but that’s a good thing if you want quality racing.

YOU CAN RACE ANYTIME YOU WANT.

Official iRacing series races are scheduled to occur at designated times around the clock. Good news if you live in Australia, work night shifts, or can’t fall asleep!

YOU CAN’T JUST HOP IN A CUP CAR.

One of the fun parts about iRacing is, like real-world racing, you’ve got to work your way up the ranks. Everybody starts their virtual careers as equal-footed rookies in entry-level cars.

Once you prove you can race street stocks or legends cars safely, your license level advances from the Rookie-level to the next step, Class D — late models if you’re going the NASCAR route. Then, repeat the process for Class C (Gander Trucks), Class B (Xfinity Series cars), and finally Class A (NASCAR Cup Series cars).

The license progression process is time-consuming and takes a lot of work, like any racing career. Battling your way through the ranks is a challenge, but that’s the fun of it all.
The iRacing license-class system prioritizes safety before speed. There’s a whole other rating for speed, called iRating, but it’s a lot to explain in an introduction to iRacing.

And, of course, there’s the esports part of iRacing. The eNASCAR Coca-Cola iRacing Series offers a $300,000 purse and plenty of star power, but it’s reserved for the best of the best.

WELL, YOU TECHNICALLY CAN HOP IN A CUP CAR

Of course, if you really want to jump into a Cup car, iRacing offers unofficial races that don’t affect your license or rankings (though the Sporting Code is always in effect, so no funny business).

Hosted races — that is, user-created races — run around the clock with any car and track combination imaginable. If you’re bored, looking to sharpen your skills, or looking for something a little more relaxing, take a look at iRacing’s Hosted Racing section.
Private racing leagues are also quite popular on iRacing, where you can race under a custom set of rules at a designated time each week against a field of the same field of drivers.

You’re also able to partake in private testing in any car or track combination you have.
Speaking of cars and tracks …

iRacing offers dozens of scary-accurate cars and laser-scanned race tracks of all different types. A base membership to iRacing includes about 20 cars and tracks, but if you want to get serious, you’ll need to pay for access to additional cars and tracks as your license progresses (or you just want to try cool new stuff).

The cost adds up, but the quality is well worth the price. You also unlock discounts with the more content you have.

When you start iRacing, it’s hard to stop. From hearing the perfectly tuned engine noises to watching the shadows and reflections pass over the cars to seeing the virtual sunset while you work on setting up the perfect pass, it’s a blast.

It can get frustrating when a car spins out in front of you and you get collected with no place to go. You’ll feel like a rockstar every time you take a checkered flag. Yes, you’ll lose track of time and probably stay on the computer way longer than you should. No, your boss probably won’t like “I was too busy iRacing last night” as an excuse when work piles up.

For a limited time, iRacing is offering 50% off for new memberships. Sign up at iRacing.com.