As a serious golf fan, what is the most memorable hole on the PGA Tour? The 17th island green at TPC Sawgrass,  the 16th at TPC Scottsdale with its stadium-like gallery, or maybe the 18th along the shoreline at Pebble Beach. Somewhere in the top five, you’re likely to be told the 12th at Augusta.

It is not the most difficult hole, the 155-yard par 3 is the shortest on the famed Augusta National course. But, during the pressure of the Masters Tournament, especially on the final day, it is a gut-wrenching challenge. Just ask Jordan Spieth, his quadruple-bogey 7 during the final round of the 2016 Masters undoubtedly cost him the tournament.

So, if you were to commemorate a particular golf hole for an over-the-top project, Augusta’s 12th might just be the one to select.

That is exactly what Lou Stagner (Golf Stat Pro) and his daughter Abby decided to do. They built a replica of the entire scene, complete with Rae’s Creek, the Hogan Bridge, pine trees and azaleas. The golf hole is named “Golden Bell,” by Augusta’s membership.

My daughter and I built this replica of Augusta National #12 out of Lego.

We are planning to sell it to raise money for charity.

Stanger and Abby plan to sell the masterpiece and donate the proceeds to charity. Don’t know if Jordan Spieth is a potential buyer, but someone is going to love this artwork. 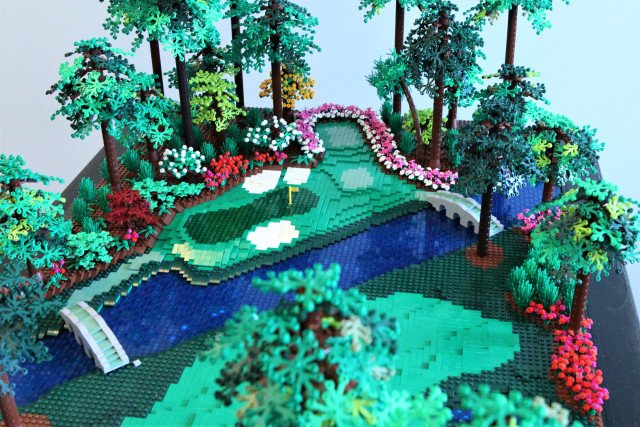 Tiger Woods Makes the Cut at the Masters, Scheffler Leads