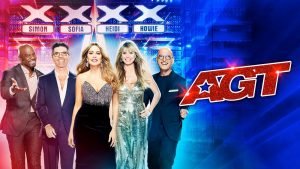 On a recent episode of the popular summer replacement series, America’s Got Talent, contestant Sam Brilhart introduced himself as being from Fenton, Michigan. His official Bio says he is from Linden. Close enough. Sam now lives in Los Angeles where he is a bartender and occasionally performs as a stand-up comedian and in costume as Chicken Scratch Sam.

His audition got off to a rough start, as Judge Simon Cowell buzzed him with a big red X after his first joke, or maybe it was the chicken costume. As with so many things, America’s Got Talent is soldiering on under the difficult circumstance of the COVID virus. No audience is in attendance just the judges and production crew are in the auditorium.

I must be tough for any act to perform without an audience. But, especially a comedy routine when the performer feeds off the energy of those he is entertaining. Howie Mandel and Sofia Vergara found Sam’s act funny. How did things turn out? Watch the video and see.

Sam moves on to the next round. What awaits him there? It’s anyone’s guess. We will keep chicking in, err, checking in on him.