If you drive along North Leroy Street with any regularity, you’ve undoubtedly noticed the man in the motorized wheelchair near the Goki Goki Restaurant. His authentic smile and hand waves greet drivers, many who respond with a honk of their car horn. Daily he sits and shares his cheer with those who pass by. His name is Jason Pellett.

Jason lives in Fenton at the Dauner Haus Apartments, a complex where rents are adjusted according to a person’s ability to pay and supplemented by the United States Department of Housing and Urban Development(HUD). The complex is a short ride down Dauner Road from Jason’s chosen post.

Ask Jason why he spends his time hailing daily traffic with a smile and wave, his response is simple. “I have the joy of Jesus in my heart and I want to share it with as many people as I can. It’s all I do, it’s my job.” Everyone should have such a clear definition of their life’s work.

The obvious follow-up question is; “Would you be willing to share your story?” Jason responds with an unequivocal and humble, “Yes.”

When Jason was a 16-year old Fenton High School student he got in a fistfight. A vicious blow knocked him out, his brain was partially deprived of oxygen. He only remembers the principal arriving and kneeling down to assist him.

Fortunately, Jason survived but was disabled due to neurological damage. His right hand is disfigured and barely able to function. He can walk a short distance but the motorized cart he rides makes it possible for him to travel to the main street.

At the age of 19, Jason lost his father. A sad blessing. Jason’s dad left him a significant inheritance. The money enabled Jason to care for and support himself. Not long ago those funds began to run short. Again, providence shined on Jason. He applied for disability benefits and was approved just as his bank account was nearly drained.

Now, 45-years old, Jason says he has everything he needs. A place to live, food to eat, joy in his life, no problems, no worries. You won’t find a charity can on Jason’s scooter, in fact, he declines offers of financial assistance. He considers waving his way of sharing a hug and the honks he gets in return are virtual hugs from his people.

Jason does not spend the whole day on-site near the roadway. Mornings, after lunch and some late afternoons are the normal work hours. Not very often on the weekend. In the few minutes that we talked to him, a couple walked up with two bottles of drinking water, a frequent visitor dropped off Subway for lunch. He has a soft cooler, provided by a local police officer, and a small tunes box positioned between his feet. 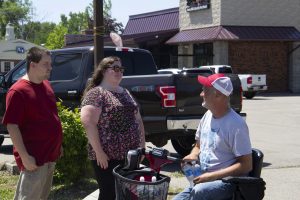 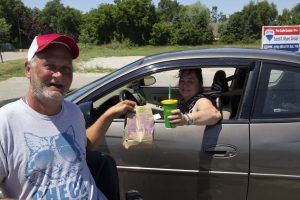 A short conversation reveals Jason has some communication limitations. It is also clear that he has an abundance of divine joy and love in his life. Next time you see Jason at his sidewalk corner, hit the horn, give a big wave of your own, and feel that warmth in your heart he’s sending your way.

New Stores Opening on the Site of the Old K-Mart in...