Four races remain before the 2020 NASCAR Playoffs begin. Today’s GoBowling 235 on the road course at Daytona, a doubleheader Saturday-Sunday at Dover next weekend, then it’s back to Daytona for the regular-season finale Saturday night, August 29th.

Any of the four events present an opportunity to add a non-winner to the playoff field and narrow the odds for those drivers hoping to qualify on points. William Byron is on the bubble, just 26 points ahead of Erik Jones and Jimmie Johnson. Tyler Reddick is another 10 points back, 36 away from the final playoff spot.

NASCAR announced that Austin Dillon self-reported a positive COVID-19 test to Richard Childress Racing on Saturday, a development that will keep him out of Sunday’s NASCAR Cup Series race at the Daytona International Speedway Road Course.

Dillon, driver of the No. 3 car, is self-quarantining, the team said. RCR has named Kaz Grala as his replacement this weekend. Dillon’s wife Whitney and son Ace remain healthy and symptom-free, according to a team statement.

Dillon may be eligible to return to competition if he receives two negative COVID-19 test results, from tests taken at least 24 hours apart. He must also receive written clearance to resume racing activity from his personal physician. If Dillon is unable to produce two negative tests within the 10-day period for his initial positive test, his return status may be reviewed by a NASCAR consulting physician.

Dillon qualified for the NASCAR Playoffs with a victory, July 19 at Texas Motor Speedway. Once the team requests it, Dillon will receive a medical waiver to ease the requirement that he compete in every race to retain his postseason eligibility.

The NASCAR road course at Dayton is 14 turns and 3.61-miles in length. A total of 65 laps comprise the 234.65 miles. Stage Lengths are 15/15/35 laps. As this is the inaugural race on the road course for the Cup Series, there is no previous winner.

Kevin Harvick and Denny Hamlin led the field to green. Everyone was a little cautious, not knowing exactly what to expect. Hamlin took the lead on Lap 1. Kyle Busch, who drove a sports car on the course during this year’s 24 Hours of Daytona, quickly moved past Harvick into 2nd and passed Hamlin for the top spot to lead Lap 2.

The part of the course that is different for the NASCAR drivers from the sports car drivers is the front chicane added just for this race. Busch flat-spotted his left front tire, carrying too much speed into the corner, allowing Hamlin to regain the lead. Kyle Busch had to come to the pits and change tires, not knowing how much damage was done when he locked up the brakes in Turns 13 & 14. 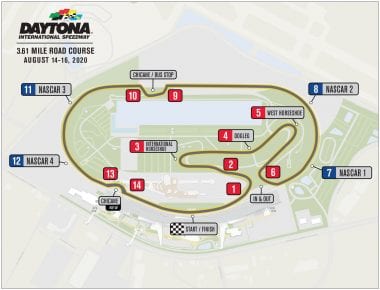 On Lap 10, Martin Truex Jr. passed his teammate for the lead. Initially, Hamlin let him go while navigating the infield portion of the track. Then he closed on Truex just before they headed back onto the high banks of the oval and the pair made contact. Damage to the left front of Hamlin’s car caused a tire rub and he had come to the pits for repair and new Goodyear racing tires.

Most of the field pitted three laps to go before the end of the Stage. Chase Elliott inherited the top spot and chose to stay out for the Stage win. Drivers needing points also opted to take advantage of the leader’s pit stop strategy and moved up the leaderboard.

Joey Logano and Hamlin sit on the front row for the start of Stage 2. Logano did not pit during the Stage ending caution. He was quickly passed by most of the Top 10 who had fresher tires. Hamlin, Truex, and Harvick led early in Stage 2.

On Lap 22 Truex passed Hamlin, this time on the oval. The Joe Gibbs Racing cars have all run near the front early. Kyle Busch runs 7th and Erik Jones 15th.

Pit stops before the end of the Stage were again the norm for most of the teams. Truex was too fast leaving pit road and will serve the penalty, to the rear of the field, on the Final Stage restart.

Hamlin stayed out to take the Stage 2 win.

Elliott and Harvick are the front row for the start of the final Stage. Elliott surges ahead, Harvick enters the infield portion of the course in a pack of cars and gets tapped by Christopher Bell. Harvick spins around and sits on the track facing oncoming traffic, he has to wait for the field to go past before he can straighten out his car and rejoin the race at the back of the pack.

With 30 laps to go, Hamlin is in 11th and rain is threatening. A lightning strike within 8 miles of the track brings the cars to pit road and the race is stopped for safety reasons. The area must remain lightning free for 30 minutes for race activities to resume.

J.J. Yeley pitted a lap prior to the red flag and climbed out of his car. He immediately collapsed and was attended to by track medical personnel. The imminent rain may provide a welcome break from the oppressive heat in the cars generated by the summer Florida sun.

After a 31 minute red flag, cars were back on the track. Remarkably, the rain that looked certain bypassed the speedway.

After pit stops cycled through, Elliott was back in front with 12 laps to go. He held a 10 second lead over Hamlin in 2nd. Kyle Busch’s crew replaced the right rear brake rotor on his car and he returned to the race with 11 laps to go, six laps down.

With five laps to go Kyle Busch blew both rear tires on the backstretch of the oval and hit the wall. The caution wiped away Elliotts big lead and set up a sprint to the finish. The leaders choose not to pit, the cars that did come in took four tires in the hopes of improving their positions. Erik Jones pitted giving up 9th place and returning to the track in 18th place.

The race restarted with three laps to go, Elliott and Hamlin on the front row, Jimmie Johnson and Clint Bowyer on row two. Bower got passed by Truex and Chris Buescher, the Top 3 pulled away.

Kaz Grala, subbing for Austin Dillon finished 7th. Kyle Busch came in 37th place. Kevin Harvick could only manage 17th place after finding trouble on more than one occasion during the afternoon.

Despite earning only four points for his 37th place finish, Kyle Busch still sits 100 points above the cut line. With three races left that should be enough of a buffer to easily qualify. Clint Bowyer with a strong 6th place finish padded his buffer to 66 points. Matt DiBenedetto slipped 13 points closer to the bubble and is just 44 points clear.

William Byron remained in the 16th and Final playoff spot. He has to hope no first-time winner comes out of the Dover doubleheader or the regular-season final back at Daytona. Jimmie Johnson shaved one point off Byron’s lead and remains one spot out. Erik Jones late pit stop cost him as he dropped out of a tie with Johnson and now sits 35 points back.

Tyler Reddick dropped into the ranks of those needing a win to qualify, he is 57 points below the cut line. Ford Performance still holds eight of the 16 playoff spots available.

Results of the GoBowling 235 from Daytona International Speedway