The Michigan Department of Natural Resources(DNR) recently released an update on fish management that will thrill anglers across the State. One of the most popular fish native to Michigan was wiped out early last century due to multiple factors.

Arctic Grayling are poised to make a comeback thanks to the efforts of the DNR and others who have worked to restore this precious resource to State waters. 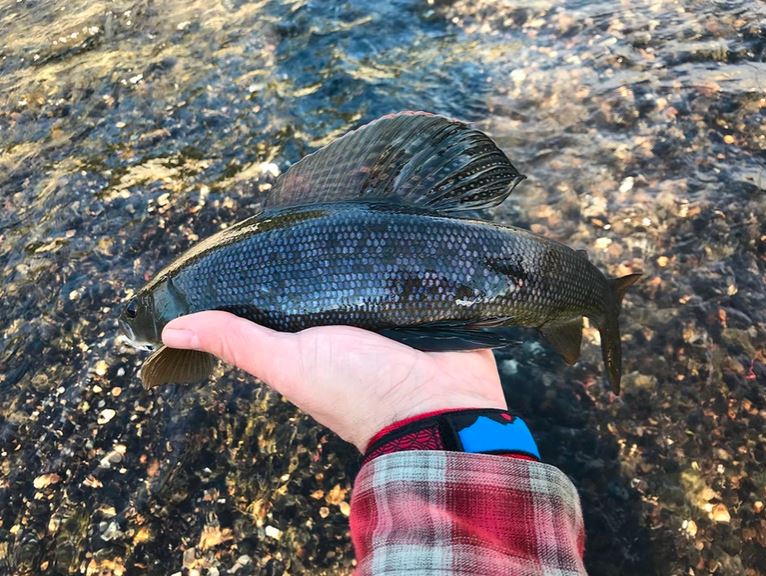 In 2016, a proposed initiative intended to reintroduce Arctic grayling to select Michigan streams was announced. That idea immediately caught fire, and Michigan’s Arctic Grayling Initiative now counts over 40 member organizations among its supporters.

Before the northern Lower Peninsula was heavily lumbered in the mid-to-late 1800s, Arctic grayling were the dominant salmonid (fish of the salmon family) species found in cold-water streams.

They were present in such large numbers that people flocked to northern Michigan towns to target this attractive fish, known best for its prominent dorsal fin. Some anglers were catching them in huge numbers and shipping them on ice back to large metropolitan areas like Detroit and Chicago to be sold in fish markets.

They were extirpated (wiped out) from Michigan due to the degrading of habitat associated with the timber harvest practices of the day and overharvest by recreational and market anglers. Competition with and predation by introduced species, like brown trout, also played a role in their disappearing from Michigan waters.

Fast forward more than a century to Sept. 17, 2020 – a big day in the history of fisheries management in Michigan.

That was the day that the first year-class (fish all produced in the same year) of Arctic grayling future brood fish (those used for breeding purposes) were transferred from an isolated rearing facility at Oden State Fish Hatchery, near Petoskey, to the Marquette State Fish Hatchery in Marquette County. 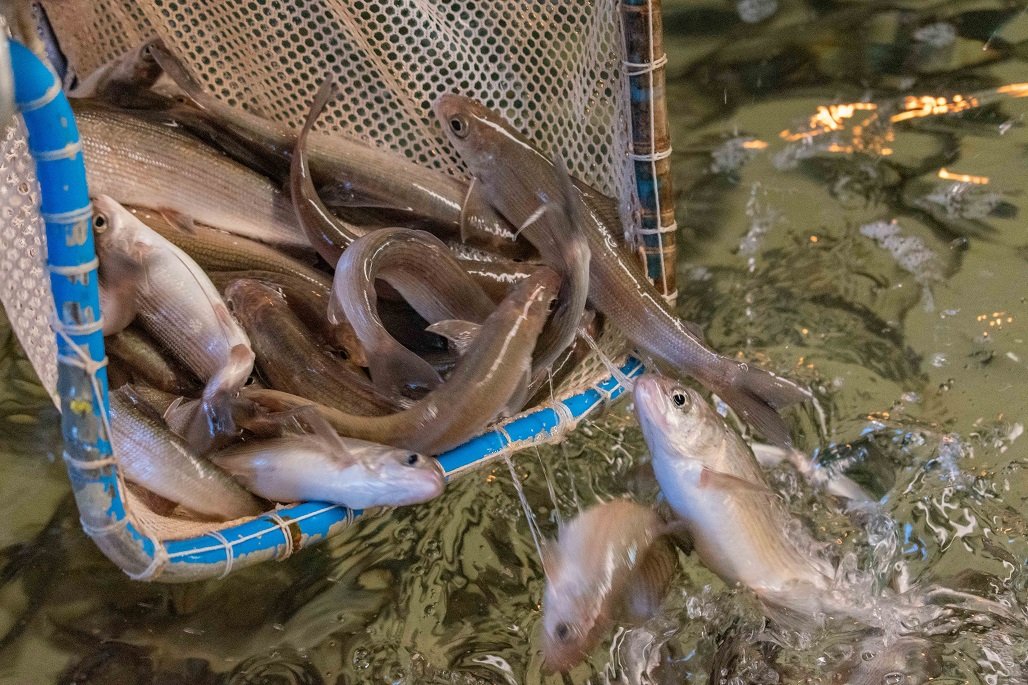 Approximately 4,000 fish, averaging 6.5 inches in length, made the trip to Marquette.

“This was a really exciting day for the Arctic grayling initiative,” said Michigan Department of Natural Resources Fisheries Division Chief Jim Dexter. “A lot of planning and work has gone into this program and it’s great to see it moving forward.”

Along with the Little River Band of Ottawa Indians, the DNR is one of the two foundational partners taking the lead in the effort to restore this native species to Michigan waters.

Roughly 10,000 eggs collected from the Chena River, a tributary to Alaska’s Yukon River, were brought back to Michigan by Michigan State University doctoral candidate Nicole Watson in the spring of 2019.

“Our partners in the Alaska Department of Fish and Game have been instrumental in getting the program to where it is,” said DNR Fish Production Program Manager Ed Eisch. “They put in a significant amount of extra work during their normal spring egg take operations to help us meet our genetics management goals. That effort allows us to start this program out with a very robust founding stock. The program would not yet have gotten out of the starting blocks if not for their efforts.”

Those eggs were destined to make their way to the Oden State Fish Hatchery in Emmett County, once the facility was ready to receive them.

Until that time, they were hatched, and the fry were cared for in Watson’s lab at MSU in East Lansing. The work being done in her lab focuses on interactions between Arctic grayling, brook trout and brown trout.

Because the eggs originated from outside of the Great Lakes drainage, they had to be held in quarantine until three separate health exams could be completed.

“The last thing we wanted to do was inadvertently introduce a new pathogen to Michigan’s waters,” said Dan Sampson who oversees daily operations at Oden Hatchery. “The whole crew here was determined to do this the right way. I’m proud of the commitment shown by the Oden Hatchery crew.”

In order to house the grayling at Oden’s isolation building, the structure first needed to be outfitted with an ultraviolet filter on the outflow from the isolation facility. This is different from how UV filters are normally used in hatchery settings.

“Now that we’ve completed a rigorous testing protocol, we’re confident that they are fit for use in this reintroduction effort,” Eisch said.

Installing the UV unit was an expensive endeavor.

The roughly $300,000 project was funded almost entirely by donations from charitable organizations, families, and individuals. The Little River Band of Ottawa Indians and the Henry E. and Consuela S. Wenger Foundation led the way with very generous donations toward this project.

This first year-class of fish will now be cared for by the Marquette State Fish Hatchery staff until they are ready to begin producing eggs. That normally occurs when the fish are 4 to 6 years old. 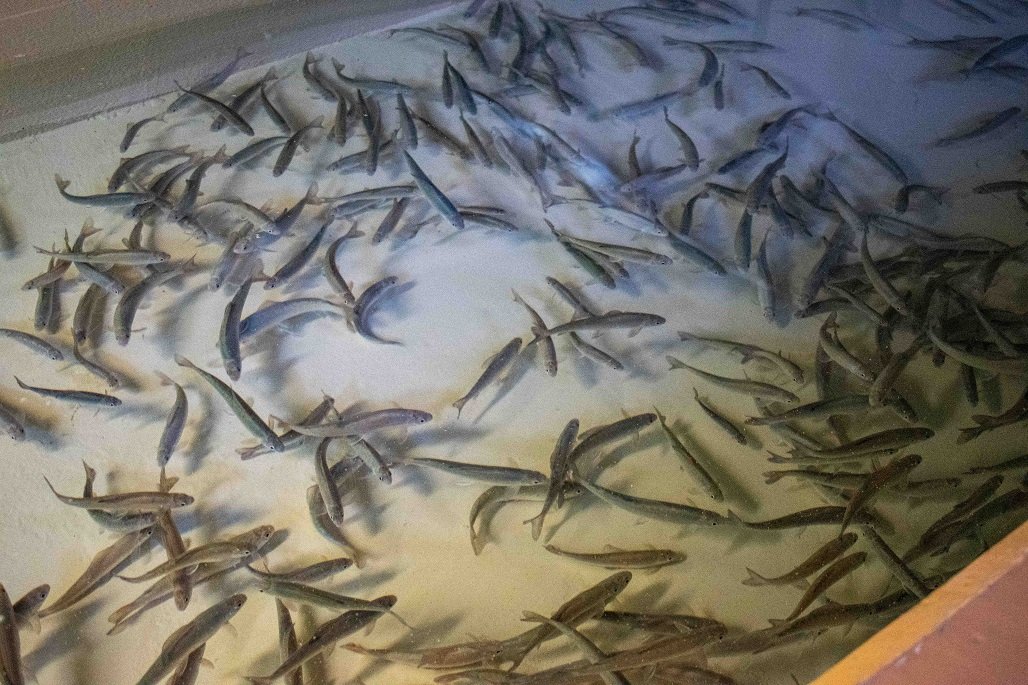 While the global coronavirus pandemic situation forced a one-year hiatus in development of the grayling broodstock, DNR staff are planning to go back to Alaska to retrieve two additional year-classes of grayling eggs in 2021 and 2022.

There were two criteria to be met for river systems to be considered as grayling reintroduction watershed candidates. First, they must have historically held self-sustaining Arctic grayling populations. Second, there must be clear community support for reintroduction, as evidenced by the stream being nominated by local governments, angling groups, et cetera.

There is much to do while waiting for the grayling broodstock to reach sexual maturity.

Decisions still need to be made on which watersheds will be targeted in this effort. Field staff and researchers from several of the partner groups will be closely evaluating habitat to determine which streams provide the best chances for successful reintroduction.

Habitat appropriate for all life stages must be present; the connectivity of the watershed must be adequate to allow the fish to reach those habitats at the appropriate times; temperature patterns must be right; large numbers of predator species such as brown trout must not be present. Understanding the conditions in the streams will maximize the likelihood of success for this exciting program.

This is not your average fish stocking endeavor.

Rather than stocking fingerlings or yearlings that were reared in hatcheries, this program calls for stocking eggs into remote site incubators that will be placed right in the streams where it’s hoped the fish will thrive.

Soon after hatching, the fry will emerge from the incubators into the stream. From that point, it will be up to them to survive. The strategy is being modeled after successful efforts to bolster Arctic grayling populations in Montana.

The goal of Michigan’s Arctic grayling initiative is to restore self-sustaining populations of this iconic species to streams in Michigan where they historically existed before their elimination.

“This is more of a marathon than a sprint,” Dexter said. “The absolute pinnacle of success of this program would be to someday have fishing opportunity in the streams where grayling was once king.”

To learn more about the initiative, visit MiGrayling.org

To learn more about the initiative, visit MiGrayling.org

Michigan Entering the Deep Freeze, Here’s What You Need to Know

Barnfest 2017 Rockin for a Great Cause