You have probably seen these guys on television, the action is riveting when they “Unleash the Beast.” Some sports are equally exciting on the little screen as they are in person. But, Professional Bull Riding (PBR) was meant to be experienced live. Think rock concert, fireworks display, master showmanship, and the threat of imminent danger all rolled into a single event that will make the hairs on your arms stand up and tingle. You have to be there to fully understand.

What is Professional Bull Riding

“The concept is simple enough: match the world’s best bull-riding athletes against the toughest animal athletes on the planet in an 8-second man versus beast duel. Put the cowboys against one another in a season-long battle to claim the year-end title of PBR World Champion, and with that, a share of more than $10 million in prize money including the $1 million year-end bonus for the season’s best bull rider. Of course, it’s only simple until you strap a tough and determined 159-pound cowboy to the back of a temperamental 2,000-pound bull. The result is unparalleled action where danger, drama, and heroic accomplishments are just a part of the game.” That’s how the PBR describes themselves.

This ain’t no rodeo. While bull riding has traditionally been a part of the seven events that make up a conventional rodeo. It is by far the most popular part of cowboys displaying their skills.

Again, according to PDR.com, PBR (Professional Bull Riders) is strictly bull riding, and the first step is just staying on the bull. There are no timeouts. No four-corners offense. No taking a knee. No towels to throw in. There is only one cowboy, one bull, and 8 desperate seconds.

In 1992, 20 cowboys broke from the rodeo and invested $1,000 each to pursue a dream of a standalone league dedicated to bull riding. In the 27 years since, the PBR has grown into a global phenomenon that has awarded more than $185 million in prize money.

In 1995, more than 310,000 fans attended PBR events across the nation. Today the PBR
attracts more than 3 million live event attendees each year around the world.

Now, before someone starts with “those poor animals” stuff, here are some facts about the animal athletes that are no bull.

It’s Quite a Ride

Riding a bull is more than just staying on it’s back for eight seconds. Each ride is worth up to 100 points: 50 points for the bull and 50 points for the rider if he successfully rides the bull for 8 seconds. Four judges award up to 25 points each to the rider and the bull. All four of the judges’ scores are combined and then divided by two for the official score.

Half of the 100 points possible is based on the performance of the bull and how difficult he is to ride. Judges look for bulls with speed, power, and drop in the front end; kick in the back end, direction changes, and body rolls. A body roll occurs when a bull is in the air and kicks either his hind hooves or all four hooves to the side. The more of these characteristics a bull displays during a ride, the higher the degree of difficulty. Judges are allowed to award a cowboy a “re-ride” if they feel the bull did not perform at the level of other bulls in the competition and did not give the rider a fair chance to earn a high score.

The other 50 points are based on how adept the rider is. Judges look for constant control and good body position throughout the ride. Spurring the bull is not required, but extra style points are awarded for doing so. (The spurs are dull and do not hurt the bull whose hide is seven times as thick as human skin.)

The rider must stay aboard the bull for 8 seconds to receive a score. The clock begins when the bull’s shoulder or hip crosses the plane of the bucking chute and stops when the bull rider’s hand comes out of the rope or he touches the ground. The bull rider must ride with one hand and is disqualified if he touches himself or the bull with his free arm during the 8-second ride.

Injuries are a part of the sport. During the PBR Monster Energy Invitational at the Southeastern Livestock Pavilion in Ocala, FL, a few cowboys suffered damage at the hoof of a bull. A broken jaw, broken ankle, and a concussion befell three of the riders competing during the afternoon session.

Plenty more walked away with bumps, bruises, and contusions. No wonder a number of cowboys sought divine intervention before their time on the bull’s back.

Young and old alike cheered, screamed, grimaced, and roared their approval. The youngsters were highlighted on the big replay screen at the end of the arena with their expressions and dance moves. 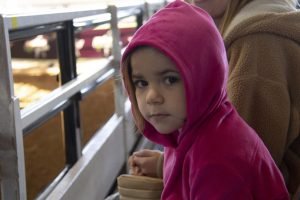 We asked first-time attendee, 13-year-old Noah Prpich, if he thought climbing atop one of the bulls was something he would like to try. “No Way.” Noah enjoyed the comedy of the cowboy clown who joked with the crowd between riders. Grandmother Ginny Shields said, “Watching the kids enjoy the show was just as much fun as watching the bull riders.”

Where Do I Get Tickets, I Want to Go

Michigan fans, mark down the dates. The PBA Unleash the Beast tour visits Little Caesars Arena in Detroit September 24-25th. Or if you are in any one of the cities listed on the 2021 schedule, make it a point to find time to attend. 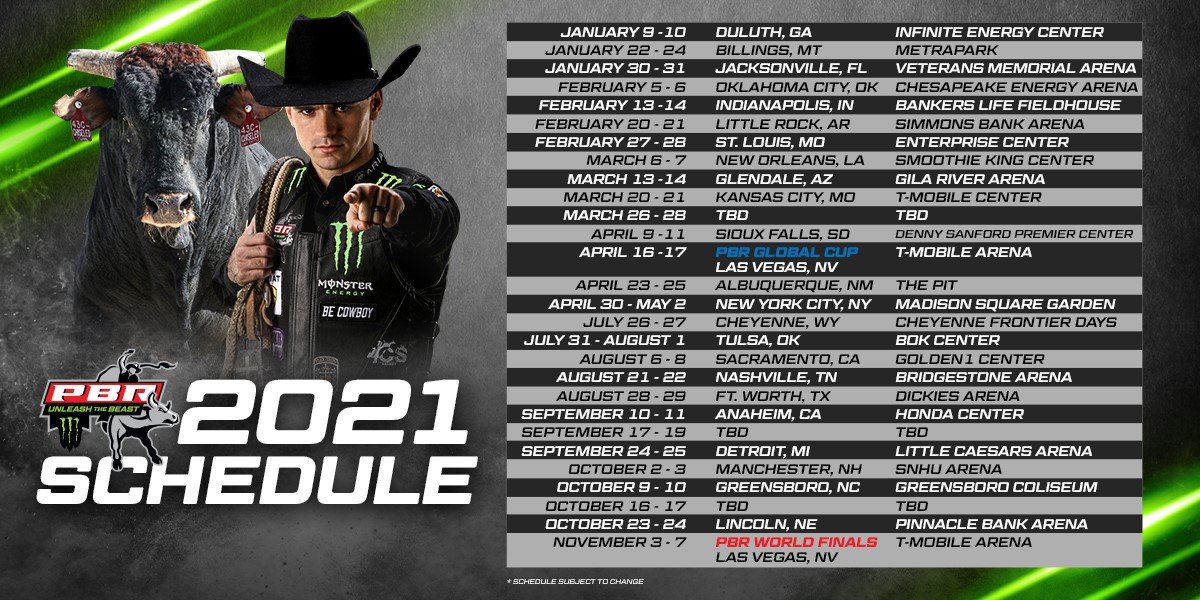 Tickets can be purchased on-line at the PBR Website. The Lasco Press will be sure to remind you when tickets go on sale for the Detroit event.

See more photographs of the action by visiting the Facebook page of Steve Sweitzer, Journalist, Sports Editor for The Lasco Press.