A wise person once said, “When looking for a job, find something you love to do and you will never work a day in your life.” In 1981 Ray Clemens was working for Jim Harrington’s Sport Craft in Lapeer, Michigan. He thought recreational motorsports might be a career that could support his young family. Ray and his wife Janet took a big leap and bought the business. Now, 40 years later they are about to fulfill a lifetime dream. Oh, and if you ask Ray what he does for fun he will respond, “I ride everything we sell.”

If you drive down Lapeer Road south of Interstate 69 you will see a building with a rustic facade and a classic water tower sitting over the main entrance. The Harley Davidson sign seems appropriate to the building’s design. Just what you might expect from the iconic American brand. You will also notice the property is an active construction site.

Inside Ray C’s Harley-Davidson of Lapeer, you will find an ultra-modern showroom with displays of motorcycles, accessories, clothing, and OEM parts in the 15,000 square foot facility. In the back is a state of the art service department with factory trained techs that boast over 200 years of Harley experience. The site construction next door represents the other half of Ray and Janet’s business.

Ray was right, the business has done well for himself, Janet, and their three sons. Ray Jr. is the General Manager of Ray C’s Extreme, the companion store of the Clemens Powersports business holdings. Matt is the Sales Manager at the Harley store and Jeff takes care of the office functions and the IT needs of the business.

Ray C’s Harley-Davidson of Lapeer would be classified as a medium-sized store among Harley dealerships. Their sales numbers are excellent given the size of their market. That can be attributed to Ray and Janet’s business philosophy of “Customers Come First.” Janet added, “Our customers become our family, just like our employees are considered as family members.”

The business has 40 employees, some from the original opening days back in 1981. “We appreciate every one of these people and their efforts, not just on our behalf but what they also contribute to the community. And we want to thank Lapeer residents and those who visit us from all over Southeast Michigan we appreciate your support.” Ray added.

This year Ray and Janet will see a business-long dream of bringing their two stores together at one location. The building construction next to the Harley store, when complete, will house Ray C’s Extreme. Most Harley riders that don’t trailer their bikes to warmer climates, store them away for the winter. Ray and Janet have that season covered also.

Snowmobiles, ATVs, and Side by Sides play well in the colder winter months and Ray C’s Extreme has just what you need to hunt, fish, camp, ride, or just play for fun in all of Michigan’s seasons. Even personal watercraft for the times we play in the State’s lakes and rivers.

The brands that Ray represents, Kawasaki, Can-Am, Ski-Doo, Yamaha, Suzuki, and Sea-Doo all scream excitement. When Ray says, “We Ride What We Sell” it actually makes you feel kind of jealous.

The press release for Ray and Janet’s 40th Anniversary can be found below. But, don’t bother reading it, that stuff is for us media geeks. Just hop in the car, drive over to 1491 S. Lapeer Road in Lapeer and see what all the excitement is about.

Plus, get the scoop on all the stuff they did not have space to say in the publicity piece. Like, Shop Ray’s 24 Hours-a-day Online at raysc.com, Demo Rides Daily, More Smiles per Miles, and Ray C’s Service Means Fast Service.

Just to clarify the 40th Anniversary is Ray and Janet’s business anniversary, their 50th Wedding Anniversary will be celebrated in October of this year. Congratulations Ray on celebrating 2 of the longest loves of your life in 2021. 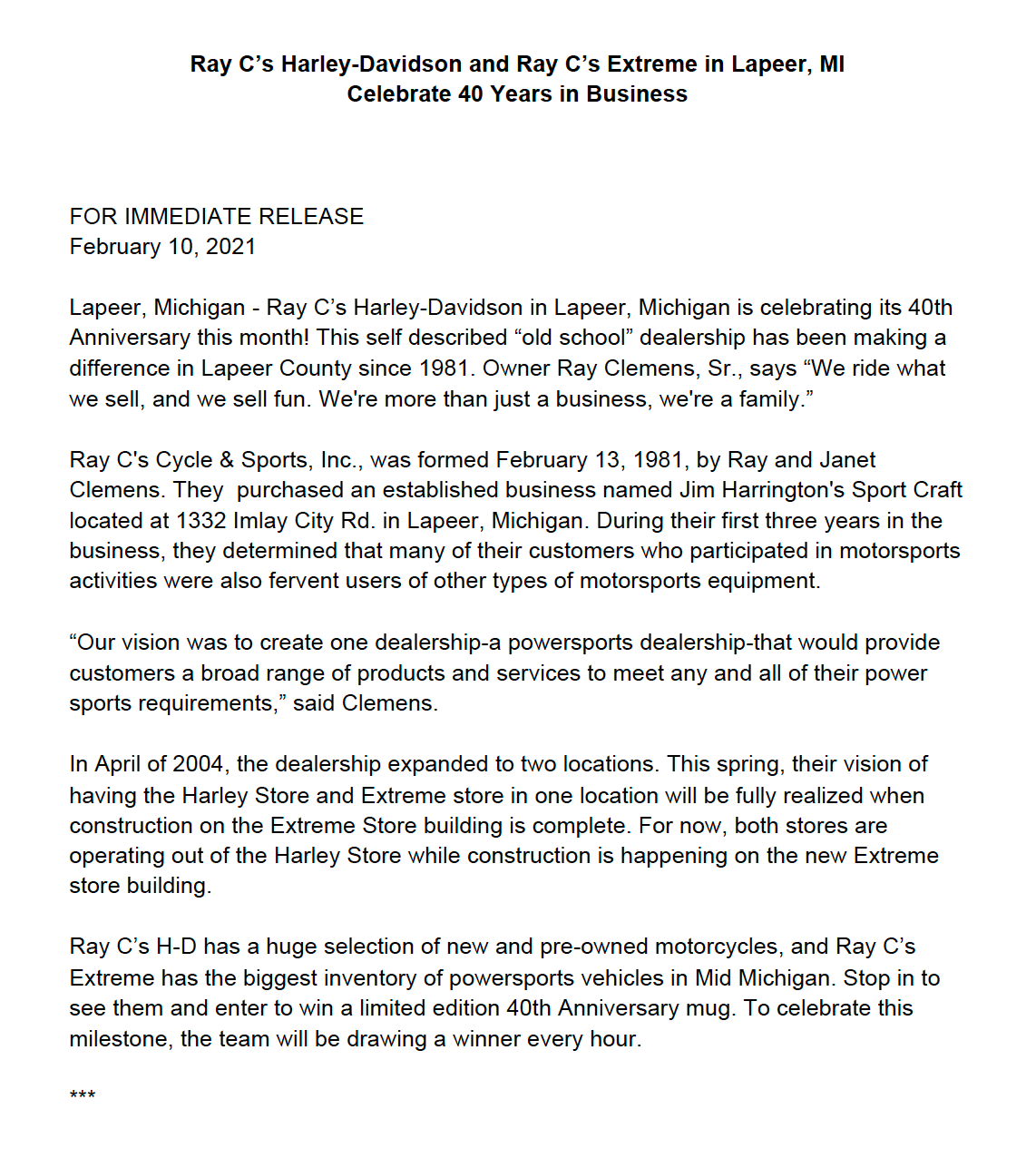 There is a New Restaurant Coming to Downtown Fenton