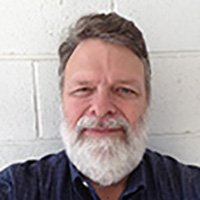 For exemplary service to the National Motorsports Press Association, Ben White is the 2020 recipient of the Joe Littlejohn Award, NMPA president Reid Spencer announced Today.
During the past six years, White served two terms as president of the organization and most recently as vice president, assuming responsibility for the NMPA Hall of Fame committee.

“I can’t think of a more deserving recipient of the Joe Littlejohn Award than Ben White,” Spencer said. “Ben’s dedication to furthering the interests of the NMPA is unparalleled, and he has always gone far above and beyond the call of duty in his service to the organization.
“Whenever something needed to be done, as with securing renewal of sponsorships for awards or NMPA activities—and then organizing the events—Ben has always answered the call without hesitation.”

White has been enamored with racing since he first attended a 1972 NASCAR event at Darlington Raceway at age 11. He currently serves as motorsports writer for the Lexington (N.C.) Dispatch as well as contributing to a broad range of auto racing publications and websites through his own Ben White Communications.

The Joe Littlejohn Award is presented each year to a person or persons, or an organization, in recognition for or outstanding service to the NMPA. The recipient is chosen by the president of the NMPA.

The award is named for the former track owner from Spartanburg, S.C., who also was a competitor in the sport. Littlejohn is credited with two career NASCAR starts, but raced extensively before the formation of NASCAR.

The National Motorsports Press Association is an organization that includes more than 200 press members—writers, broadcasters, and photographers—as well as associate members involved in the conduct and promotion of auto racing.

In addition to recognizing its own members through yearly contests, the NMPA confers a number of significant annual awards, including the NMPA Most Popular Driver Award for the NASCAR Cup Series, the NMPA Pocono Spirit Award, the Richard Petty Driver of the Year Award, the Myers Brothers Award for service to NASCAR racing and the Wood Brothers Award of Excellence for outstanding contributions to the sport by crew chiefs, mechanics and engine builders. The organization also elects inductees into the NMPA Hall of Fame.

Check out the NASCAR NextGen Mustang at Charlotte Motor Speedway