The NASCAR Cup Circuit makes its first stop of the year at Talladega Superspeedway for the GEICO 500 and with eight different winners in nine races, it’s likely that trend will continue today. Superspeedway races are wild cards that tend to produce surprise winners. There have been 11 drivers who scored their first Cup Series victory at Talladega. 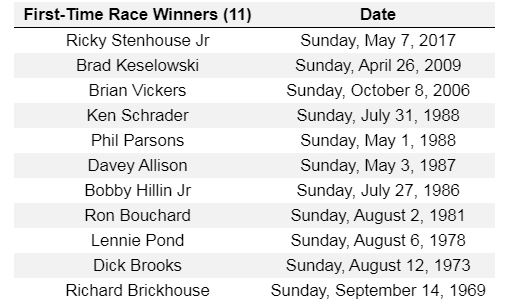 The all-electric Ford Mustang Mach-E will lead the field as the pace car for today’s race. Ford Performance has defined the manufacturer strategy for success at Talladega when the different teams wearing the Blue Oval work together to benefit the brand.

Roger Penske called a meeting this week with Brad Keselowski(2) and Joey Logano(22) to make sure there will be no repeat of what happened when the two drivers were leading the Daytona 500 on the last lap and wrecked each other. Keselowski is the winningest active driver in today’s race with 5 victories (2017, 2016, 2014, 2012, 2009). Brad starts in the 10th position at the drop of the green.

Denny Hamlin(11), still looking for his first win in 2021, earned the top starting spot on the pole. However, he was sent to the rear of the field for unapproved adjustments. Logano lines up at the front with Alex Bowman moving up to take the spot vacated by Hamlin. From there three and four-wide racing is expected to be the norm on restarts. Ryan Blaney(12) is the defending champion of the GEICO 500, he starts 7th. Stages are set for 60/60/68 laps around the 2.66-mile superspeedway making up the 500 miles. It will be interesting to see who prefers to race at the front and who drops back to stay out of trouble.

Logano went to the lead and Keselowski worked his way up to find the rear bumper of his teammate as side-by-side racing was the norm. Kyle Larson(5) began overheating as soon as the race went green. Pulling into the pits his crew found a piece of metal blocking the radiator that was supposed to be removed prior to the car being pushed to the starting grid. Larson’s engine expired after just 3 laps and he retired to the garage.

Bubba Wallace(23) started 40th at the rear of the pack, also for unapproved adjustments. He drove to the lead after just 11 laps proving you can make major moves with the performance package NASCAR mandated for the race.

William Byron(24), Kevin Harvick(4), and Kyle Busch(18) all took a turn at the lead prior to the competition caution being displayed after completing 25 laps. Everyone pitted for fuel and tires, Hamlin, Kyle Busch, Ryan Blaney(12), Christopher Bell, and Byron led the charge off pit road. Martin Truex Jr. was too fast entering pit road and will have to restart at the rear of the field.

Each Stage will require a pit stop to complete the required number of laps. Whether those stops occur under green flag racing or the result of a yellow flag could be a determining factor in the race.

On the restart, Hamlin moved to the top spot. Three-wide racing quickly formed in the lead pack. Hamlin had to move up to the top lane to stop a run from Team Penske as Keselowski, Blaney, and Logano were lined up and progressing.

The yellow came out on Lap 38 as Joey Gase(28) spun off Turn 4 with a tire issue. It was ideal timing for Aric Almirola(10) who had been complaining of a bad vibration from the rear of the car since the last pit stop. The lead group stayed on the track protecting their positions.

Blaney pushed Hamlin out front when racing resumed. Blaney got shuffled out of line, but his teammate Logano was there to pick him up and they drafted to the front. Matt DiBenedetto(21) put the Wood Brother’s Ford Mustang out front for the sprint to the green and white checkered flag.

With five laps to go, Chris Buescher(17) pushed Ryan Preece(37) to the lead. It was short-lived as the Ford got behind DiBenedetto and returned him to the top spot. On the final Lap of the Stage, going down the backstretch, Hamlin bumped drafted Logano and then Ricky Stenhouse Jr.(47) got into Hamlin turning him sideways into the #22 car. Logano spun and went airborne flipped over the top of Bubba Wallace. Keselowski and Chase Briscoe(14) also sustained damage in the incident.

DiBenedetto held on for his 1st Stage win of the year, as Ford Performance took 5 of the 10 points-paying positions at the green and white checkered flag.

Chase Elliott led the field off pit road for his shot at the front. Hamlin, Buescher, and DiBenedetto followed. The lead continued to swap as Elliott led for three laps, Hamlin back to the front for two circuits, and DiBenedetto returning to the top spot until Hamlin reestablished himself consistently in the 1st position.

With 28 Laps to go in Stage 2, the Ford driver’s pitted together. Kevin Harvick was penalized for too fast entering pit road. Hamlin suffered the same fate a lap later. Then when he came back to pit road to serve his drive-through penalty, he was too fast entering again. Hamlin had to come back a 3rd time and lost a lap in the process. When everyone cycled through pit road, Ryan Preece was back out front.

Preece almost wrecked passing lapped cars that were trying to stay on the lead lap. Byron took advantage and moved past for the top spot. The yellow flag was back out at Lap 103 as Kurt Busch(1) was belching smoke from the rear of his car and dropping oil on the track.

Busch pitted as his team speculated he had an oil line come loose. Then his car caught fire under the hood and required attention from the pit lane fire crew, requiring a visit to the garage early.

The leaders stayed on the track taking the green flag with 11 laps to go in the Stage. DiBenedetto moved back to the front and Kyle Busch(18) had a big run to try and take the lead. DiBenedetto moved low to block Busch and the two almost wrecked. Busch taking a big detour into the paved portion of the track between Turn 4 and pit road.

The shuffle up at the front allowed Bubba Wallace to take the lead. Hamlin raced through the field trying to regain his lap. He had worked himself up to Wallace’s bumper but was unable to make the pass. Keselowski pulled in front of Hamlin to block his run. Hamlin had to check up and was hit in the rear by Martin Truex Jr. Both drivers hit the wall damaging their race cars. Hendrick Motorsports drivers Elliott, Byron, and Bowman were in the melee but avoided serious damage.

Everyone involved was able to continue with repairs, except for Bowman who was forced to retire from the event.

The Mustangs of Blaney and Aric Almirola(10) were on the front row coming to the restart. They were followed by Wallace and Daytona 500 winner Michael McDowell(34) having another fine day on a superspeedway.

Coming to the green flag Blaney picked up the backing paper to a piece of Bear Bond used to tape up broken sheet metal. He had to relinquish the lead to Almirola so the airflow from the draft would dislodge the paper from his radiator grille.

Everyone seemed content to run single file and put laps on the board possibly until the final pit stop. A line of six Ford Mustangs led the line with Almirola out front, followed by Blaney, McDowell, Keselowski, Buescher, and DiBenedetto. Michigan’s Erik Jones(43) joined the Top 10 for the first time today, driving for the King, Richard Petty.

With a push from Kyle Busch, Ross Chastain(42) drove to the front as drivers began to mix it up just prior to the final pit stops. Kevin Harvick(4) swapped the lead with Chastain as the field split into double-wide racing.

Pit stops began with 33 laps to go, Stenhouse got sideways prior to the entrance and hit the inside wall. As he was pitting anyway, no caution flag was displayed. With 30 laps to go, the Top-10 Fords pitted together.

Christopher Bell(20) was the new leader after pit stops were completed. Erik Jones was up to 4th. With 24 laps to go, the lead pack was reunited and the race for the win was on.

With 19 laps to go, Erik Jones took over the top spot, with DiBeneddeto pushing they changed lanes as needed to protect the lead position by blocking runs. Quinn Houff(00) hit the wall on the backstretch when he had a tire go down with 17 laps to go.

While the front of the lead pack stayed out, most everyone else on the 27 lead lap cars came to the pits for tires and fuel. Just in case the race goes to overtime. Almost a certainty.

Restarting with 12 laps to go, Chastain pushed Jones to the front. However, they were quickly swallowed up by the outside line led by DiBenedetto. The six Fords of DiBenedetto, Blaney, Keselowski, McDowell, and Buescher separated themselves from the rest of the pack.

Truex suffered a flat tire and dropped to the bottom of the track to stay out of trouble. Inexplicably, he did not come to pit road and the outer casing of the tire came off the car and settled in the middle of the track bringing out a caution with 4 laps to go. Forcing the race to finish in overtime.

DiBenedetto led the next to last lap with a push from Keselowski. When he moved high to block a run coming from the top side, Keselowski passed on the bottom. Brad held on for the win. Another different winner in 2021.

Rookie Kaz Grala(16) finished a fine run in 6th. Erik Jones rebounded to 4th place but was turned into the wall in the middle of the tri-oval and finished last on the lead lap in 27th.

Only 7 positions remain for drivers to qualify for the NASCAR Playoffs via points. With Denny Hamlin, Kevin Harvick, and Chase Elliott still winless in 2021 that number is sure to shrink.

Big names from the 17th position back should be concerned as the gap to the bubble position continues to grow. Next week it’s off to Kansas Speedway for the Buschy McBusch Race 400.

Results of the GEICO 500 from Talladega Superspeedway

Ford Dominates Late and Holds on for Win at Talladega Wreck...