NASCAR racing action returns to Michigan International Speedway this weekend with three events on the schedule for stock car fans. The FireKeepers Casino 400 for the NASCAR Cup Series is set for 3 pm on Sunday, August 22. The 400 is the next to last race before the start of the NASCAR Playoffs and a number of storylines make for an exciting afternoon of competition. But first, what to expect if you are attending MIS this weekend. 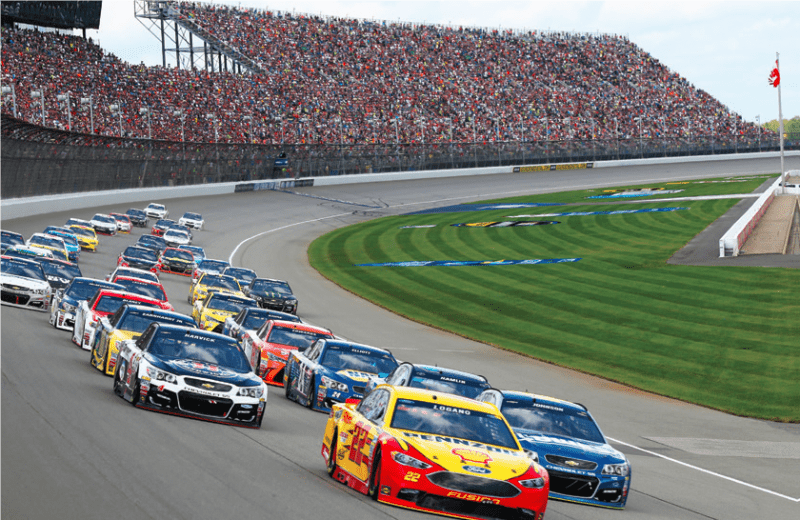 After running last year in front of empty grandstands due to the pandemic, race fans are being welcomed again back to the track nestled in the scenic Irish Hills of Michigan. All camping venues are open, including the track infield. Just be aware NASCAR requires that all guests wear a face mask while indoors and in enclosed areas at all times, regardless of vaccination status.

All the usual activities, bingo, cornhole, family fun night, concerts, Saturday night fireworks, and the fun experiences of the Fan Plaza. Track President Rick Brenner emphasized, “Our goal is to create a safe event for everybody where everyone can come out and have a great time. We are following the Michigan Department of Health guidelines and the Center for Disease Control guidelines to create as safe an event as we can.”

Camping options, ticket packages, premium clubs, race day extras can all be booked and purchased online at https://www.mispeedway.com/, and kids tickets are free for Friday and Saturday races.

The young guns of the NASCAR Xfinity Series are featured Saturday in the New Holland 250, green flag at 3:30 pm. Plan to arrive early as parking lots open at 9 am and the Fan Plaza kicks into gear at 10 am. Kid Zone activities include the Ann Arbor Hands-on Museum, Face Painting, Balloon Artist, and Jugglers.

Don’t forget tickets for kids 12 & under are FREE with the purchase of an adult ticket to the ARCA Menards Series Henry Ford Health System 200 and NASCAR Xfinity Series New Holland 250 races. In addition, youth tickets are available starting at $10 in select sections and half price in all other regular grandstand seating areas for Sunday’s Cup race.

The excitement of AJ Almendinger’s win at the Brickyard has Cup fans at a fever pitch for the final two races of the Cup Series regular season. While the Dinger’s victory did not count for a playoff spot due to his team’s part-time status in 2021. There are two playoff positions still to be filled.

Denny Hamlin pointed his way into the postseason last week at Indy. Kevin Harvick currently holds one of the available spots, sitting 15th with 733 points. He can lock up that position depending on the outcome of Sunday’s race. A win by any driver 16th to 30th in the standings would put Harvick in jeopardy heading into next week’s regular-season finale at Daytona.

Teammates are fighting it out for the 16th and final open spot. Tyler Reddick currently sits on the bubble with a 28-point lead over fellow Richard Childress Racing driver Austin Dillon. The two ran together most of the race on the Indianapolis Motor Speedway road course until Dillon got caught up in the late-race incident involving the curbing that put his car out of the race.

Drivers on the outside of the playoffs currently will be looking to crash the party with a surprise victory. Matt DiBenedetto almost accomplished that driving the Wood Brothers Ford Mustang into the mix late at Indy. The iconic race team is seeking their 100th career victory in NASCAR’s premier circuit. Michigan would be a great place to celebrate that feat.

If playoff drama was not enough to raise the intensity level for this Sunday, Kyle Busch and Joey Logano created some extra drama of their own with a bumping incident in the corners of the Indy Road Course. These guys really do not like each other, will it spill over into this Sunday’s race?

Look to The Lasco Press for continuing coverage all week from Michigan International Speedway.