The NASCAR Cup Series Playoffs start today at the famed “Lady in Black,” Darlington Speedway in the Cookout Southern 500. The next 10 races will determine the 2021 Series Champion, 16 divers have qualified for the elimination-style postseason that will result in the winner being awarded the coveted Cup Trophy at Phoenix Raceway on November 7th.

The NASCAR Playoffs consist of three elimination rounds of three races each, with four drivers surviving to the final race where the highest finisher of the four is crowned champion. 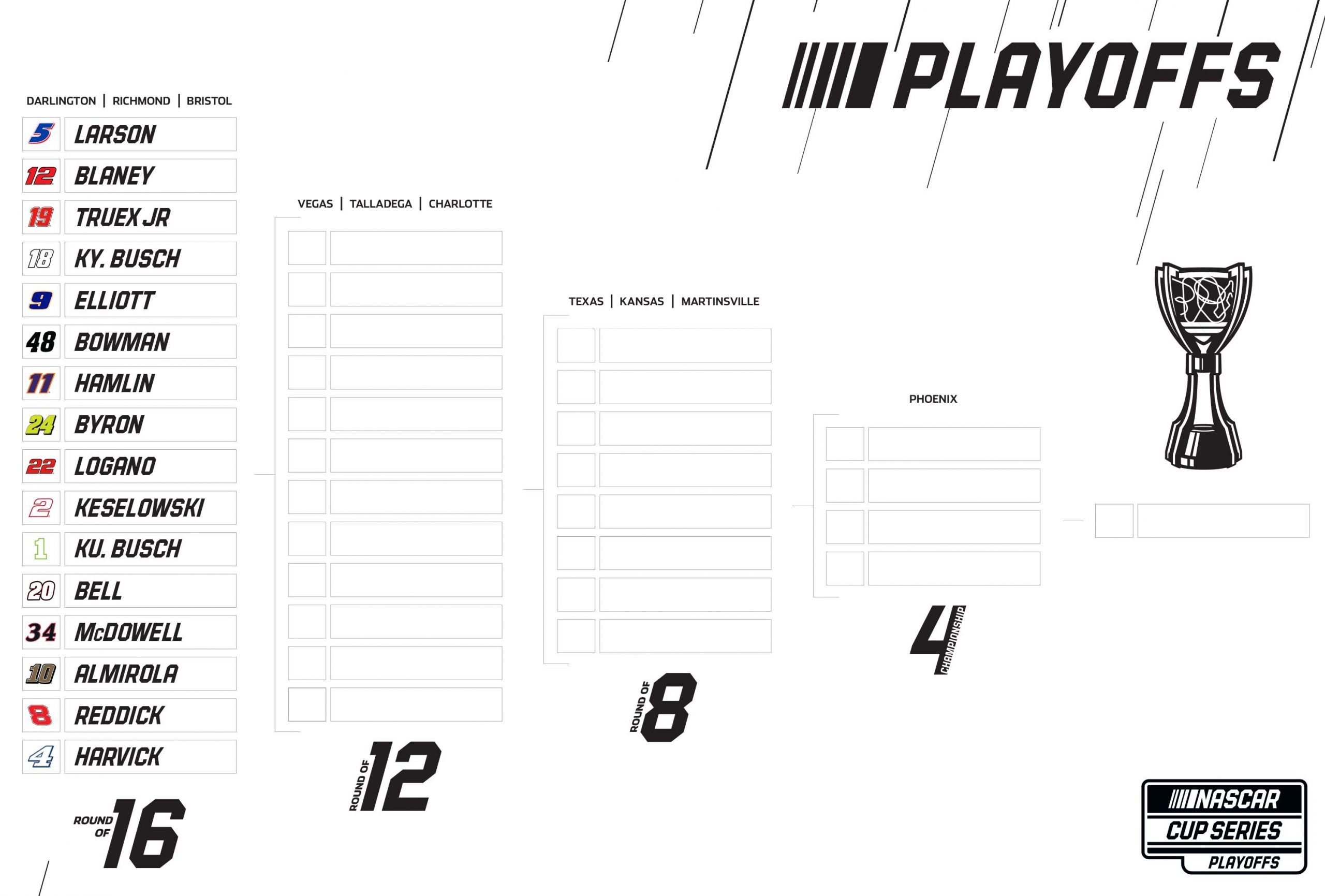 Drivers start the playoff with points they have accumulated during the regular season. Victories are worth 5 Playoff Points, Stage Wins are worth 1 Playoff Point, and the Final Regular Season Standings award Points to the Top 10 drivers.

Playoff points are added to a championship-contending driver’s reset points total at the start of every round of the NASCAR Playoffs until they are eliminated from championship contention.

Round by Round Playoff Predictions

With 52 playoff points that carry forward to every round, Kyle Larson should be a lock for the Championship 4. The first two rounds will be a real dogfight to advance to the Semifinal Round of 8. The wild card? Race winners automatically advance to the next round. The Lasco Press predicts the elimination drivers each round, start your own scorecard to see how you compare.

With races at Darlington, Richmond, and Bristol we give the nod to veterans advancing to the next round. The surprise here is Brad Keselowski. A veteran and a Cup Champion, Brad going out in the first round is an upset pick. Keselowski is moving from Team Penske to Roush Fenway Racing in 2022 and unfortunately, he seems to have checked out already.

Reddick was the last man in, beating out teammate Austin Dillon at Daytona to clinch the last playoff spot on points. He has not shown the consistency to earn enough points to move forward when they really count.

Michael McDowell won the season-opening Daytona 500 and stayed near the top of the points standings early in the season. His slow slide from the top is likely to slip him out in Round 1.

Christopher Bell won early in the season also, his victory on the road course at Daytona a week after the 500 put him in. Bell has raced well on the circuits where you turn right as well as left. But, there are no road courses in the first three races.

The lack of Playoff Points moving forward will catch up to these four drivers. Harvick is the most likely driver to break out of this group if he can post a victory in the first two rounds. Kevin’s nine wins in 2020 seem like a decade ago as he is yet to seriously contend for a win this season.

The Round of 12 starts in Las Vegas, then Talladega and The Roval at Charlotte give long-shot hopefuls a chance to pull off the upset and move forward.

In the final shot to make it to the Championship 4, expect things to hold true to form at Texas and Kansas. Then the short track at Martinsville will literally knock out the last four elimination drivers.

Unless they can find victory lane in any of the first three rounds, Hamlin and Bowman will also run out of points at this elimination stage. The magic will be gone for Elliott and Blaney. The championship will come down to three previous Champions and a favorite to join the club.

Kyle Larson, Martin Truex Jr., Kyle Busch, and Joey Logano will race for the Cup Championship. Larson is the odds-on favorite to put a cap on his outstanding season and take home his first Cup Champion title. Logano is the surprise entry to the gang of four, look for Joey to post another win during the Playoffs and contend seriously in two other races. Timing is the key as Logano starts mid-pack in the initial points standings.

E-mail me your picks, steve@thelascopress.com, we will keep track and report how the competition shakes out at the season’s end.