The start of the 2022 Monster Energy AMA Supercross season is just around the corner. Fans are fully back and so are venues skipped during the pandemic restricted seasons. 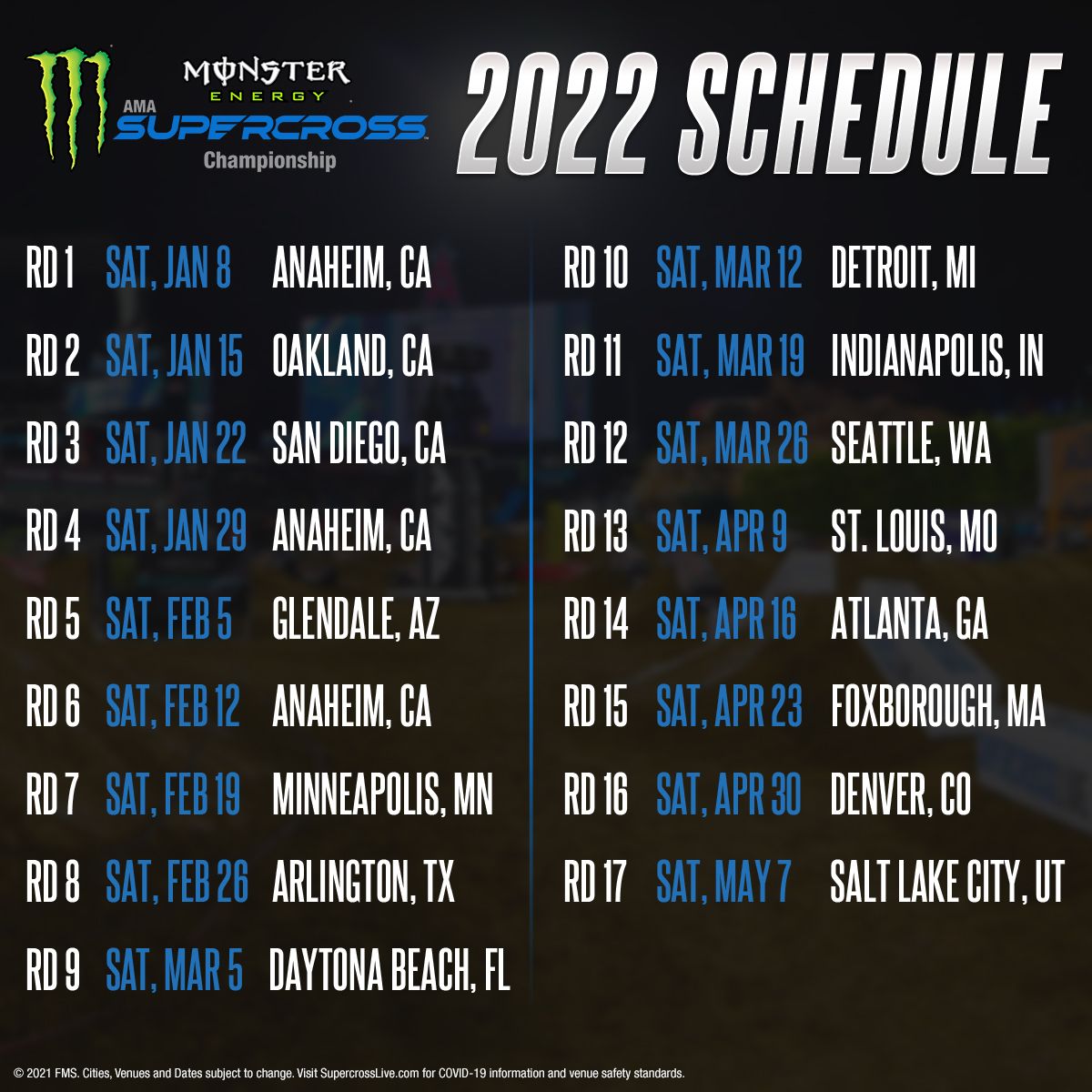 After a weekend off, the final five rounds will crisscross the country beginning in St. Louis, Mo. at the Dome at America’s Center on Saturday, April 9, then return to Atlanta Motor Speedway in Hampton, Ga. on Saturday, April 16, followed by a visit to Gillette Stadium in Foxborough, Mass. on April 23 and Empower Field at Mile High in Denver, Colo. on April 30. The championship will conclude in Salt Lake City at Rice-Eccles Stadium on Saturday, May 7 as Utah, the State of Sport, once again hosts the finale.

Storylines abound for the 2022 Supercross season as the 450SX Class continues to feature what has become an ever-expanding, deep array of talent. Three Supercross champions will be competing for another title – 2x champion Cooper Webb, 2020 champion Eli Tomac and 2018 champion Jason Anderson as both a domestic and international “who’s who” list of competitors vie for their first title – Ken Roczen (Germany), Marvin Musquin (France), Dylan Ferrandis (France), Adam Cianciarulo, Justin Barcia, Aaron Plessinger, Malcolm Stewart, and Chase Sexton, all from America.

Stay up to date with all of the latest news and updates by visiting SupercrossLIVE.com.

Supercross Futures, an AMA National Championship will resume in 2022 with a sole focus on the 250SX Futures Class. Athletes can begin to qualify starting in October at select primary events spread across the country. Eligible athletes will then advance to the second round of qualifying set to take place at an upcoming Monster Energy AMA Supercross event during the 2022 season. Finalists will then proceed to the Supercross Futures AMA National Championship scheduled for Saturday, May 7 at Rice-Eccles Stadium in Salt Lake City.
The country will be divided into six regions and existing tracks and events will serve as the first round of Primary qualifiers – Northwest, West, Southwest, Southcentral, South, and Northeast. Riders will qualify by finishing in the top 22 in their respective primary and can enter multiple regions.
These 22 athletes will then be invited to race in a Premiere qualifier which will take place on Saturday at an upcoming Monster Energy Supercross race within their respective region. The top four athletes from each Premiere qualifying race will then advance to the Supercross Futures AMA National Championship where 24 athletes will vie to become the 250SX Futures Class Champion.

Northwest
West
Southwest
Southcentral
South
Northeast
Supercross Futures AMA National Championship
Saturday, May 7, 2022, at Rice-Eccles Stadium, Salt Lake City, UT
Athletes competing in the 250SX Futures Class will be awarded points towards their pro Supercross license based on their finishing positions at the Premiere qualifying events.
In the fall of 2022 and during the 2023 Supercross season, Supercross Futures, an AMA National Championship will expand under the same qualifying procedures to host classes of all ages and skill levels.

Supercross Futures, an AMA National Championship, is the official advancement platform of Monster Energy AMA Supercross. The series provides the world’s fastest up-and-coming talent a chance to compete in the same stadium and on the same dirt as the elite athletes of Monster Energy Supercross while honing their skills in advance of their professional careers.
For 2022, a new championship qualifier model will be introduced that consists of six primary qualifying events and six premiere qualifying events. The premiere qualifying events will take place at upcoming Supercross races advancing finalists to the Supercross Futures AMA National Championship set to take place at the final round of Supercross at Rice-Eccles Stadium in Salt Lake City. The 2022 program will focus on the elite 250SX Futures class, providing athletes the opportunity to earn their 250SX Class Supercross license through the Road to Supercross program. Visit supercrossfutures.com for more information.

Justin Thomas Comes From Way Back to Win the PGA Championship

Going to a Red Wings Game, Going in Style