Are you a fan of the ’80s? Do the names Billy Idol, David Bowie, Morrissey, the Smiths, and Depeche Mode invoke images of sold-out stadium shows? Would you like to relive those days even if it’s just for one night? Mark your calendar now for December 4th. 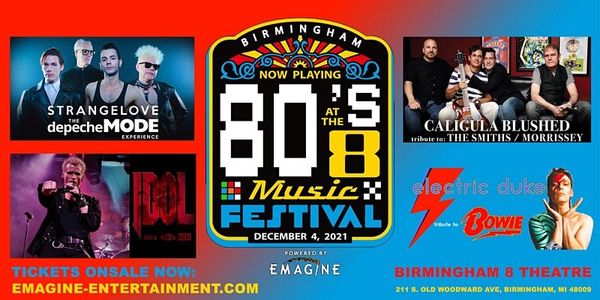 Emagine Entertainment, Inc., one of the nation’s leading innovators in motion picture exhibition, in conjunction with Martin Show Productions, are thrilled to announce “80’s at the 8 Music Festival”, a time warp back to the ’80s featuring four separate live music tribute bands,  along with movies, fashion, gadgets, and games we all love from that decade.

“’80s at the 8” is a live music festival that takes over the entire venue for the evening.  Once you walk in the doors, you will be transformed back to the ’80s in a themed party atmosphere with lots of great activities sure to keep you entertained all evening long.

This will be a general admission,  21 and older, event where guests will be able to experience four separate critically acclaimed tribute bands performing on three different stages throughout the theatre.  Each band will be playing multiple sets during the festival and will be sure to keep crowds on their feet dancing all evening long.

In addition to the bands, there will be a DJ in the main lobby entertaining guests as they move around the event and mingle and enjoy a large selection of beer, wine, and specialty-themed cocktails, along with a host of fun food choices.  Drink and food tickets will be sold at the door.

Come and enjoy all of the great music, food and drinks, there will also be a selection of popular ’80s movies playing in auditoriums as well as an 80’s trivia game and a whole host of other fun activities including a Best Dressed Contest, Breakdancing Exhibitions, Retro Games, Photo Booth, Thriller Dance, and variety of unique 80’s Memorabilia all set in a Gnarly Atmosphere.

“We are thrilled to be hosting this amazing event at The Birmingham 8 Powered by Emagine.  Our goal in bringing this historic venue into the Emagine family was to bring to life our tagline of The Magic of Movies and More, and focus on bringing the More to our guests.  We think this event will be historic and the first of many great events to come to Emagine.  Partnering with Martin Show Productions will take this event to a new level,” said Anthony LaVerde, CEO of Emagine Entertainment.

David Martin, Producer with Martin Show Productions added, “I am so excited to be working with Emagine Entertainment to bring back live music to The Birmingham 8 Powered by Emagine.  Rolling back to the ’80s, this music festival has a rad lineup and will be a totally awesome experience.”

The critically acclaimed bands participating at this event come to us from all over the United States and play to sold-out crowds regularly.  Strangelove, the festival headliner will be appearing on Jimmy Fallon’s “Clash of the Cover Band” show on Wednesday, December 1 at 9:30 p.m. on E!, just three days before the “’80s at the 8 Music Festival”.  The full lineup of musical guests include:

Festival headliner Strangelove-The Depeche Mode Experience delivers a pitch-perfect “best of” DEPECHE MODE arena/stadium-scaled concert that transports listeners through time and touches on several key points in DM’s illustrious career. In addition to spot-on recreations of the darkly seductive music; the look of the performers-the dance moves, stage sets, era-specific authentic gear/attire, and custom projection visuals are ALL there; reflecting different eras of Depeche Mode’s four-decade, 120 million album-selling story. This internationally-touring sensation has been performing since 2010 (including SOLD OUT shows in S. America, Australia, etc.) and is just getting started.

“They do it to such fine detail that’s it’s scary. They play to very big crowds. They have videos that they’ve made, screens behind them, it’s like a full-on production. I think they are fulfilling a fan’s needs by being there when we are not on tour. Keeping the fans satiated while we’re taking a break. ” – DEPECHE MODE’S  MARTIN GORE

Dedicated to the notion that fans of the Smiths and Morrissey want to hear some of the greatest music ever written in a true live concert setting, Caligula Blushed delivers an authentic rendition of Smiths/Morrissey songs, with each performance based on an impeccable set list.
Seasoned Mozzer Quinn’s spot-on mannerisms and vocals, paired with the band’s top flight musicians, render each Caligula Blushed performance a visceral live experience for all Smiths and Morrissey fans!

“Caligula Blushed, as always, delivered a stellar performance. Fans sang along to every song. They tossed roses onto the stage, and reached out for just a touch from the hand of the man they came to see.”  — These Subtle Sounds 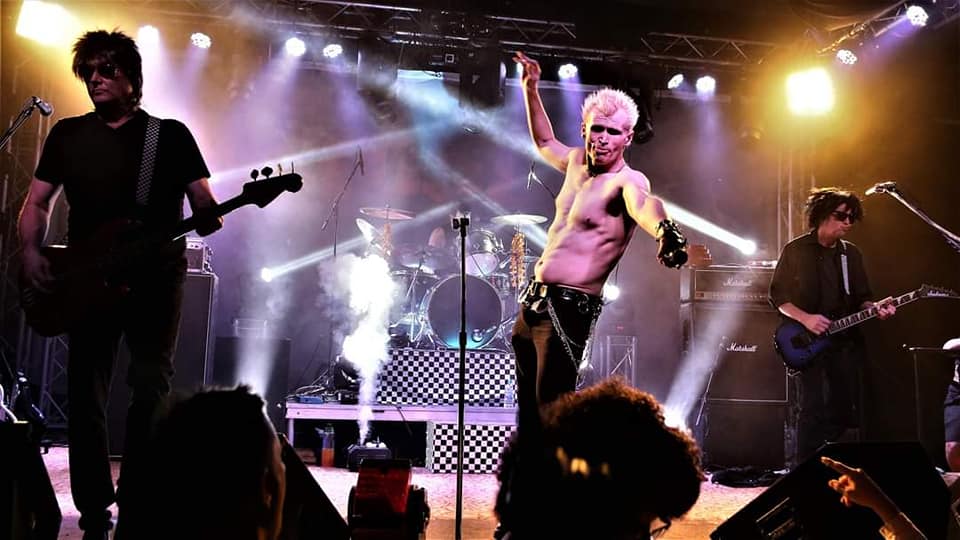 Electric Duke frontman and Bowie doppelganger Julian Shah-Tayler, from Leeds, England, has collaborated and performed with several David Bowie touring & Studio musicians (on original albums and Bowie material) and effortlessly channels the zeitgeist of Ziggy Stardust.  A formidable artist/chameleon in his own right, his Bowie-flavored music has appeared in Pixar, Disney, Breaking Bad and The Sopranos.

Tickets are available at  www.emagine-entertainment.com.