NASCAR has announced the qualifying elements and race format for the first-ever Busch Light Clash at the Coliseum, the unprecedented 150-lap main event highlighting two days of racing action at the iconic Los Angeles Memorial Coliseum on Saturday, Feb. 5, and Sunday, Feb. 6, 2022. 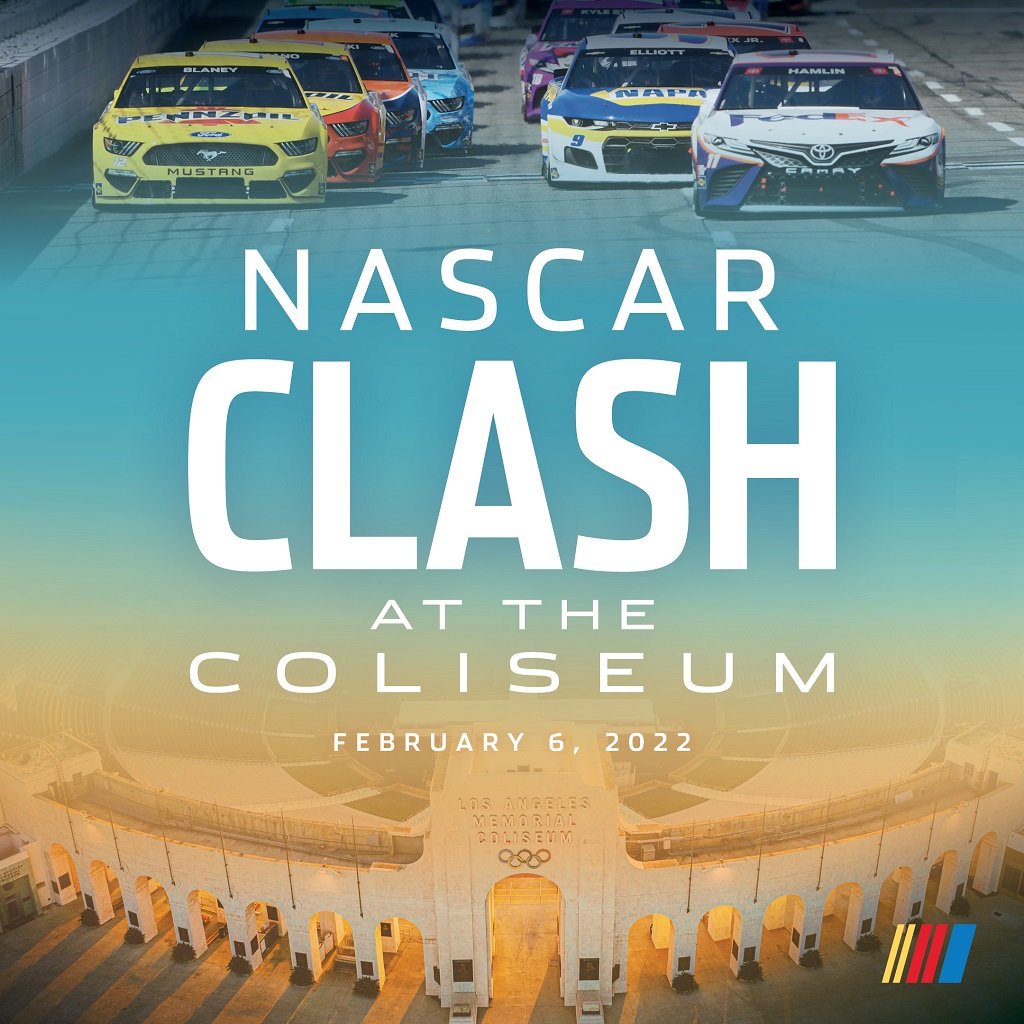 On Saturday, NASCAR Cup Series competitors will take to the track for practice sessions prior to single-car qualifying runs to determine the starting order for the four scheduled heat races. The field will be open to 40 entrants.

On Sunday, on-track action will begin at 5 p.m. ET on FOX, with four 25-lap heat races consisting of 10 cars each. Below is a breakdown of how the heat races will be filled out:

The remaining six finishing positions from each heat (24 total cars) that did not advance will continue through to one of two 50-lap Last Chance Qualifying races. Below is a breakdown of how the Last Chance Qualifiers will be filled out:

The final spot in the Busch Light Clash is reserved for the driver who finished the highest in the 2021 points standings who does not transfer on finishing position in the heat races or Last Chance Qualifying races.

All other drivers will be eliminated from the competition for the remainder of the event weekend.

Now if that sounds a bit confusing, it’s easier to follow with a chart showing the progression of advancement. 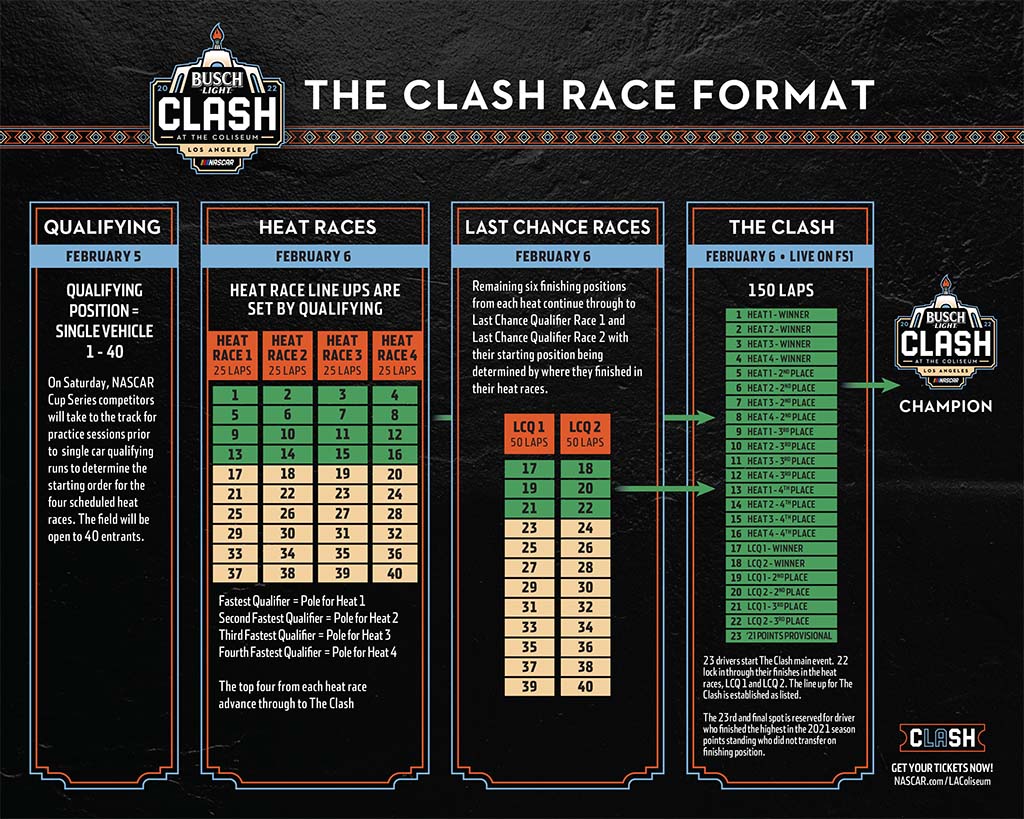 “There has already been an enormous amount of buzz around next year’s Busch Light Clash at the Coliseum, and we feel that this race format and the accompanying programming throughout the entire weekend will only build on that already established momentum,” said Ben Kennedy, NASCAR senior vice president of strategy and innovation. “The unprecedented nature of this event, coupled with the fact that our sport will be in the spotlight in the middle of downtown Los Angeles, makes this a can’t miss event when we get our 2022 season underway next February.”

“I’ve had the chance to drive on the track through iRacing and make some laps in the NextGen car at Bowman-Gray on a similar layout, and there’s no doubt that this race is going to be awesome,” said Clint Bowyer, longtime former NASCAR Cup Series driver, and current FOX Sports analyst. “The different qualifying events and format for the Clash are only going to add to what will be an unforgettable weekend. This is definitely a race you’re not going to want to miss!”

The Sunday schedule of events is below:

Tickets for the NASCAR Busch Light Clash at the Coliseum are on sale now.  Tickets start at $65 for adults and kids 12 & under starting as low as $10.  The Los Angeles Memorial Coliseum offers a variety of seating options from lower to upper bowl, midfield start/finish line seats to premium club seats with access to the exclusive Lou Galen Club Lounge. For tickets and all event information visit nascar.com/lacoliseum.

About The Los Angeles Memorial Coliseum

The Los Angeles Memorial Coliseum, a living memorial to all who served in the U.S. Armed Forces during World War I, has been a civic treasure for generations of Angelenos.  The legacy of events and individuals hosted in nine-plus-decades reads like no other:  the only venue to host two Summer Olympics (Xth Olympiad in 1932, XXIIIrd Olympiad in 1984) and soon a third (XXXIVth Olympiad in 2028); home to college football’s USC Trojans since 1923 and the UCLA Bruins (1928-1981);  professional football’s Los Angeles Rams (1946-1979 and 2016-2019), Raiders (1982-1994) and Chargers (1960); hosting three NFL Championships and two Super Bowls; home to the Los Angeles Dodgers (1958-1960) and the 1959 World Series; appearances by U.S. Presidents Franklin D Roosevelt, Dwight Eisenhower, John F. Kennedy, Lyndon Johnson, Richard Nixon, and Ronald Reagan; and international dignitaries such as Martin Luther King, Jr., Cesar Chavez, Pope John Paul II, the Dalai Lama, and Nelson Mandela.

On March 29, 2008, the LA Dodgers and the Boston Red Sox set a Guinness World Record for the largest attendance ever at a baseball game with a crowd of 115,300. Other historic events include Billy Graham’s appearance in 1963 in front of 134,254 guests (still an all-time Coliseum record), Nelson Mandela’s 1990 triumphant return to the United States, the first-ever Papal Mass by Pope John Paul II in 1987, and the 1976 Bicentennial Spectacular.