On January 8th, Round 1 of the 2022 Monster Energy AMA Supercross Championship season gets underway at Angel Stadium of Anaheim in Southern California. While fans are getting hyped, the preseason news cycle is ramping up with some important announcements.

NBC Sports’ 2022 Supercross race action begins with the season opener from Angel Stadium in Anaheim, live on Saturday, Jan. 8, at 10 p.m. ET on CNBC, marking a return to the state where the series has begun the season 24 of the past 25 years after beginning last season in Texas.

The 2022 season culminates with the season finale from Rice-Eccles Stadium in Salt Lake City, Utah, on Saturday, May 7, at 8 p.m. ET on CNBC, with an encore presentation airing on Sunday, May 8, at 1 p.m. ET on NBC.

All televised coverage across NBC, CNBC, and USA Network streams on NBCSports.com and the NBC Sports app.

Peacock exclusively streams a Supercross race for the first time in 2022 from Angel Stadium on Sat., Feb. 12. All Supercross heats, qualifiers, plus live and on-demand replays of races will be available on Peacock.

Veteran NBC Sports motorsports commentators Leigh Diffey and Todd Harris will handle play-by-play duties for Supercross coverage in 2022. They’ll be joined by five-time Supercross champion and seven-time premiere class Motocross champion Ricky Carmichael as an analyst, and reporters Daniel Blair and Will Christien. Blair will serve as the play-by-play commentator for a select number of races.

Below is the complete 2022 Monster Energy Supercross telecast schedule: 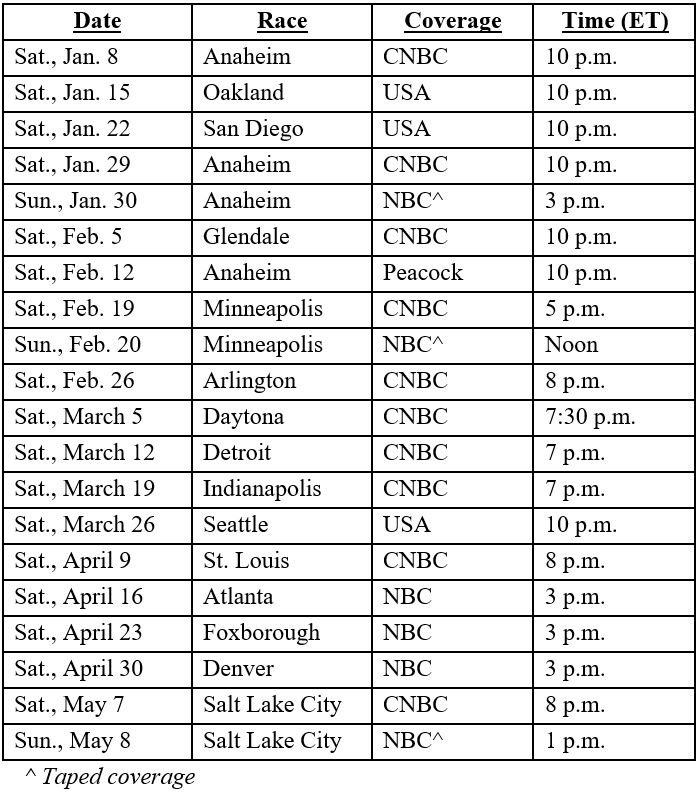 Milestone and Feld Entertainment, Inc. announced Monster Energy Supercross – The Official Videogame 5.
The latest release of the most beloved and realistic Supercross videogame will be available on March 17, 2022, on PlayStation®5, PlayStation®4, Xbox Series X|S, Xbox One, Windows PC®/STEAM. PlayStation version supports Free Upgrade from PS4 to PS5, Xbox version features Smart Delivery.
A renovated Career Mode is now even more real and immersive than ever before, where players can start as developing amateurs in the 250SX Futures Class while aiming to reach the heights of glory as a Pro. Monster Energy Supercross – The Official Videogame 5 also introduces the Rider Shape System, an exclusive feature for Career Mode that will affect riders’ performances in case of falls or injuries. Training and completing specific tasks are key to quickly recovering and restoring your rider to always be in top form!
With Monster Energy Supercross – The Official Videogame 5 players will enjoy a new gameplay experience, enriched by 2-stroke bikes, now available in every game mode. And for newcomers, the Future Academy will provide all the information needed to take their first steps into the Supercross world. This friendly tutorial will teach players the Supercross basics to help them climb the ladder from Beginner to Pro; it also provides many in-game options that will make races accessible for everyone, those will impact flow recovery, assisted steering, and many other technical aspects, aiming to create a gameplay experience suitable for every kind of player!
The Track Editor is also back with the classic experience of track creation, along with a new feature: Rhythm Section Editor. Players will be able to mix and match pre-existing modules to design complex prefab track sections, then be able to share them with the community.
And after the amazing success of past editions, The Track Editor Contest will be back, and another player will have the opportunity to create a track and enter the contest directly in the game. Users will have the chance to see their creation replicated in real life and being part of the Official Championship. This unique feature represents a once-in-a-lifetime opportunity in the videogame industry: a digital track designed by a player will be raced by real riders in the Monster Energy AMA Supercross Championship.
What about racing with friends or solo in a new, stunning, open-world environment? “Compound” is the answer, featuring new tracks, several cross challenges, and collectibles to unlock additional gears.
Online Multiplayer for the first time features cross-gen matchmaking and brings the challenge to the world scale. Monster Energy Supercross – The Official Videogame 5 also features the split-screen mode, to play with friends directly on the couch!
After the incredible success of the past edition, E-sport is also coming back to Monster Energy Supercross – The Official Videogame 5, pushing players to use all their skills and attitude to become a legend in the eSX Championship sponsored by Yamaha!

If Eli Tomac wants to stand alone as the all-time winner in DAYTONA Supercross, he will have to conquer the grueling and demanding course designed by the man he currently shares the Daytona record with – the “greatest of all time” Ricky Carmichael.
Daytona International Speedway has unveiled the course design for the 52nd annual DAYTONA Supercross on March 5, and for the 15th consecutive year, the unique and difficult course layout was created by Carmichael, the five-time DAYTONA Supercross champion. It will be the toughest of the Monster Energy AMA Supercross Championship season and the only AMA Supercross event in the state of Florida in 2022.
The DAYTONA Supercross at the World Center of Racing is the longest continuous Supercross race in America dating back to 1971 and will feature the best riders in the world. Tomac, who has won the last three (2019, ‘20, ‘21) and five out of the last six (2016, ‘17) DAYTONA Supercross events, will go for a record sixth victory that would take him out of a tie with Carmichael.
Carmichael’s signature design will sport tremendous obstacles – 57 in fact – on a 3,300-foot (.625 miles) layout that features a multitude of turns and vaulted jumps. The start gate will originate from pit road with the riders launching full throttle towards fans across from the NASCAR start/finish line to kick off the action before taking a hard left in a counter-clockwise direction. After that sweeping first turn, riders will have 400 feet and 13 obstacles to sort things out before entering the first, tight 180-degree turn.
Returning is the exciting “over-under bridge” with riders racing across the bridge while other riders battle for position beneath them. One item of change, however, is that it will be located closer to the tri-oval and fans in the stands. The beach sand section will be back and will cause havoc for the riders with two 150-foot-long legs attached to a 180-degree turn. And, of course, the high-rising finish line will be parallel with the NASCAR finish line.
“I can’t believe it’s been 15 years that I have been designing the DAYTONA Supercross track,” said Carmichael. “Every year we try to make it better for both the fans and riders and for 2022, I believe we did just that with some new twists. First off, I’m glad we were able to get the over-under bridge back because it opens up the options on the course. That and the split lane are what I am looking most forward to seeing along with the famous sand section that the fans always love to see! The DAYTONA Supercross in March is going to be the only one in my home state of Florida so I am very excited about that as well. It’s going to be a great track and I can’t wait to watch and see how it all unfolds this year!”
The high-flying, crowd-pleasing DAYTONA Supercross is fun for the entire family. Tickets for the 52nd annual DAYTONA Supercross, a Monster Energy AMA Supercross event, start at just $40. Kids 6-12 are $15 and ages 5 and under are free in general admission areas.
“Ricky has done it yet again with his incredible, never-seen-before course that will amaze fans in attendance for the 2022 DAYTONA Supercross,” said Daytona International Speedway President Frank Kelleher. “Couple its challenging design along with the historical ramifications of the anticipated event will make the iconic event under the lights one for the ages.”
Also returning in 2022 will be the 12th annual Ricky Carmichael Amateur Supercross on Sunday, March 6, and Monday, March 7. Amateur supercross racers have an opportunity to test their skills on a slightly modified version of the same course used in the DAYTONA Supercross. Following the “Ricky Carmichael Amateur Supercross” will be the Daytona Vintage Supercross (DVSX) and ATV Supercross, both of which take place on Tuesday, March 8. For more information, visit https://racedaytona.com.
DAYTONA Supercross 2022 will be a part of the 81st annual Bike Week, which will culminate with the March 12 DAYTONA 200 hosted by MotoAmerica.
Fans can stay connected with Daytona International Speedway on Twitter, Facebook, and Instagram for the latest speedway news. For information on all events, visit www.daytonainternationalspeedway.com or call 1-800-PITSHOP.