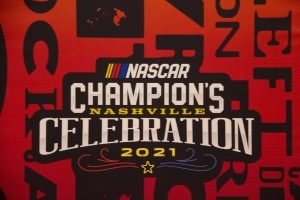 NASCAR rolled out the red carpet for the elite of their sport at the Music City Center in Downtown Nashville on Thursday evening celebrating the Champions of 2021 across all three national series.

The 16 Cup Series playoff drivers were vetted along with the Championship drivers and other national award winners. Kyle Larson was the star of the show after earning his first Cup Series Championship in 2021.

Winning car owner, Rick Hendrick, was on hand and invited the entire team of the No. 5 car to a special photo session in the Media Center as a prelude to the festivities.

The stars were shining on the red carpet where tuxedos and gorgeous evening gowns were the fashion standard for the night.

NASCAR’s ARCA Menards Series Champion Ty Gibbs was the youngest Championship driver. Ty is the grandson of Joe Gibbs, owner of the multi-car team Joe Gibbs Racing. At 19, Ty is old enough to drive 200 mph, but could not consume the adult beverages served at the after-party.

Reid Spencer, President of the National Motorsports Press Association(NMPA), presented two of the most coveted awards the industry bestows annually.

Chase Elliott continues to follow his family tradition, both on the race track and in the eyes of NASCAR Cup Series fans. For the fourth straight year, Elliott has been named NMPA Most Popular Driver present by Hooters, the only major NASCAR award determined solely by the vote of race fans.

Elliott easily outpolled the competition to win the 2021 honor. Since 1990, drivers named Elliott or Earnhardt have monopolized the award. Chase’s father, Bill Elliott, won the honor a record 16 times, with Dale Earnhardt Jr. a close second as a 15-time NMPA Most Popular Driver.

Now Elliott is building his own tradition as the decisive winner of the award. Historically, the NMPA Most Popular Driver presented by Hooters has honored the giants of the NASCAR Cup Series, from seven-time champion Richard Petty to David Pearson to Bobby Allison to Cale Yarborough to Darrell Waltrip—all Cup champions and all early selections to the NASCAR Hall of Fame.

The award was first presented in 1953, with Lee Petty earning the honor for the
first of two consecutive years.

Presented annually since 1958, the award, named in honor of former NASCAR
competitors Billy and Bobby Myers, recognizes individuals and/or groups who have
provided outstanding contributions to the sport of stock car racing. Each year, the
NMPA Myers Brothers Award winner is selected by a vote of the NMPA membership.

Jenkins, who passed away in August of 2021 at age 73 after a battle against brain cancer, was a fixture in ESPN’s NASCAR broadcast booth from 1979 through 2000. Initially, he teamed with Larry Nuber and later with NASCAR Hall of Famers Ned Jarrett and Benny Parsons to form one of the sport’s most revered broadcast teams.

A native of Richmond, Indiana, Jenkins got his start in motorsports broadcasting as an
IndyCar pit reporter on radio and television. When ESPN debuted in 1979, Jenkins was
one of the first anchors for the new sports network, where he worked until 2003.

After leaving ESPN, Jenkins joined the staff at Indianapolis Motor Speedway, filling
roles as a public address announcer and press conference emcee. Subsequently, he
returned to the IndyCar broadcast booth with Versus and retained the role of chief
IndyCar announcer when Versus was acquired by NBC Sports Group.

Next February, the greatest motorsports drivers in the world will meet at Daytona International Speedway for the Daytona 500 where the chase for the Bill France Cup begins anew in 2022.