This past weekend’s Motor City Comic Con thrilled pop culture fans and brought out the crowds, many dressed as their favorite characters. First thing! Mark the dates October 14-16, 2022 on your calendar as Comic-Con returns to the Novi Showplace for the Fall edition of the spectacle.

Last October, The Lasco Press paid its first visit to this event. We had difficulty describing the scene. This is not must-see TV, it is must-experience live entertainment. Admittedly outside of Star Wars and a few laps of Mario Cart, my knowledge of this phenomenon is limited. So, what to do? Ask a 12-year-old. We brought along junior journalist Caleb Robinson to explain the happenings and identify the characters.

Exploring “Artists Alley” we met a couple of local authors. Holly Ash and Mackenzie Flohr, creators of the “The Journey Missions” series and “The Rite of Wands” series respectively, talked about the challenges of the publishing business and their love of putting words to paper. 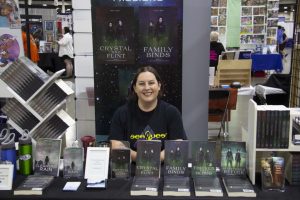 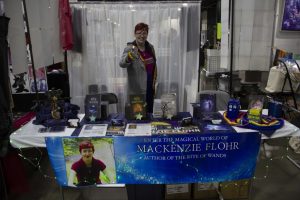 Vendors offered everything from T-shirts to miniature lego people from every genre of pop culture.

When we began to run into guests entering the hall in their assorted costumes, Caleb became the interpreter enlightening me as to the meaning or association of their cosplay garb.

Entering the Celebrity Guests area, there was a face I recognized.  Mariel Hemingway, as beautiful as ever, in the same age decade as myself. Caleb did not know her.

For additional photographs of Saturday morning’s excitement click on the link to the writer’s Facebook page and look for us at the Motor City Comic Con in October.