Steve Yzerman reaches back to his days with the Tampa Bay Lightning to pluck the next great coach to lead the Detroit Red Wings. 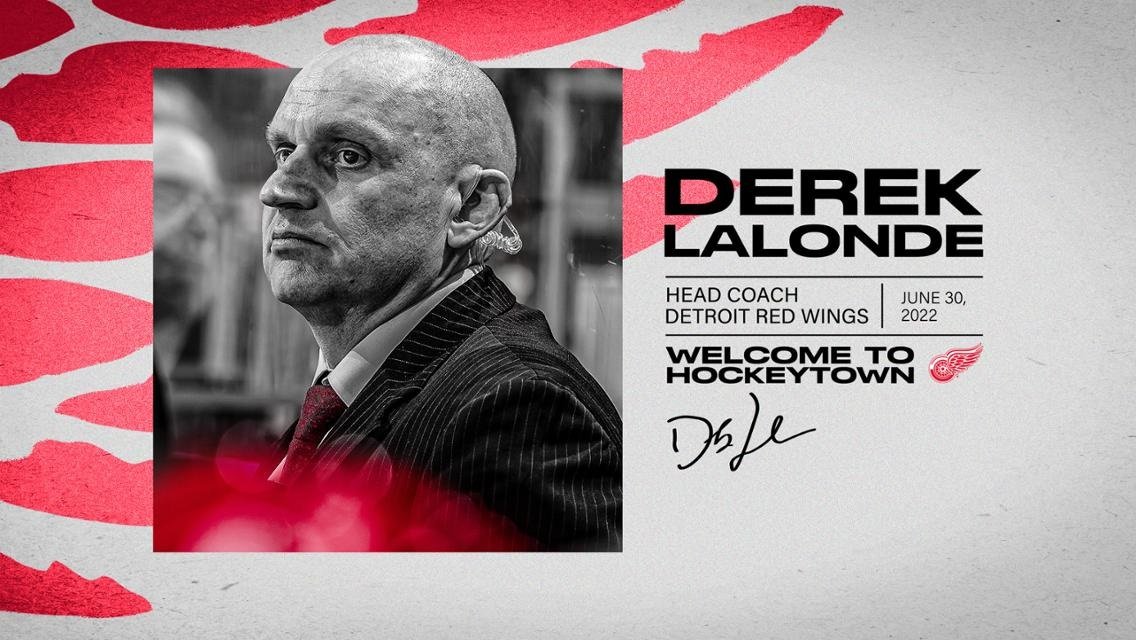 “I’m very pleased to announce Derek as our new head coach,” Yzerman said. “He has proven himself as an excellent coach at every level and has spent the last four seasons in the National Hockey League as part of a very successful program in Tampa Bay. We feel he is ready to take the next step in his career as the head coach of the Detroit Red Wings.”

Lalonde, 49, joins the organization after spending the last four seasons as an assistant coach with the Tampa Bay Lightning. During his tenure with the Lightning, Lalonde helped the team clinch four-straight postseason berths, highlighted by back-to-back Stanley Cup championships in 2019-20 and 2020-21. In Lalonde’s inaugural campaign behind an NHL bench in 2018-19, the Lightning earned their first Presidents’ Trophy after setting a franchise record with 128 points while tying the NHL’s single-season record of 62 wins previously set by the 1995-96 Red Wings. In all, Tampa Bay compiled a 192-77-10 regular-season record and a 46-26 postseason mark with Lalonde on its coaching staff. He was named an assistant coach by the Lightning on July 12, 2018, when Yzerman served as the team’s vice president and general manager. Lalonde was previously a coach at Tampa Bay’s development camp in 2013.

“I’m thrilled to be named head coach of the Red Wings,” said Lalonde. “I’d like to thank Chris Ilitch and the entire Ilitch family, as well as Steve Yzerman and the Red Wings management team for entrusting me with the opportunity to lead this historic franchise. I’m ready to get to work with our group. There’s a very bright future ahead in Detroit.”

Prior to his time with the Lightning, Lalonde worked for two seasons as head coach of the American Hockey League’s Iowa Wild from 2016-18, posting a 69-58-17-8 record with the Minnesota Wild’s primary affiliate. Lalonde became the first coach in franchise history to produce a winning season with a 36-31-7-2 mark during his first campaign in 2016-17, a 22-point upgrade over the previous year.

A Welcome Addition to the Red Wings Staff

“On behalf of the entire organization, I’d like to welcome Derek, his wife, Melissa, and their three children – Alex, Luke, and Abby – into our Red Wings family,” said Christopher Ilitch, Detroit Red Wings Governor, President, and CEO. “Derek has an impressive resume, particularly the work he’s done with young players and prospects throughout his career. We’re excited to have him leading the charge behind the Red Wings bench. I’d also like to commend Steve and his staff for conducting a very thorough and detailed search process. We have the greatest fans in hockey, and they deserve a team that consistently competes for Stanley Cup championships. We’ll continue to work diligently towards that goal under the leadership of Steve and Derek.”

A native of Brasher Falls, N.Y., Lalonde spent two seasons in the Red Wings’ organization as head coach of the ECHL’s Toledo Walleye from 2014-16. Lalonde guided Toledo to a 97-35-7-5 record in that span, resulting in two consecutive Brabham Cup titles as the ECHL’s regular-season champion. In his first season in 2014-15, Lalonde led the Walleye to a 50-15-5-2 mark and won the John Brophy Award as the ECHL’s Coach of the Year after showing a 58-point improvement from the previous campaign, which remains the largest in league history.

Lalonde began his head coaching career with the United States Hockey League’s Green Bay Gamblers, accumulating a record of 114-56-8-6 as head coach and general manager from 2011-14. He was named the USHL’s Coach of the Year in 2011-12 after the Gamblers recorded a 47-9-2-2 mark and captured the organization’s fourth Clark Cup title. On the international stage, Lalonde coached the United States to a gold medal at the 2013 World Junior A Challenge, and also won gold as an assistant coach at the 2012 tournament.

Before making his head coaching debut, Lalonde was an assistant coach at the University of Denver from 2006-11, helping the Pioneers to a 122-63-19 record and two Western Collegiate Hockey Association titles in 2008 and 2010, in addition to four consecutive NCAA Tournament appearances. He also served as an assistant coach at Ferris State University from 2002-06, in addition to working at the Division III level with Hamilton College from 2000-02 and Lebanon Valley College from 1998-00. Lalonde started his coaching career as a graduate assistant at the Massachusetts College of Liberal Arts (formerly North Adams State College) from 1995-98, where he earned an M.A. in education administration.

A former goaltender in the Division III ranks with SUNY Cortland, Lalonde recorded a 3.93 goals-against average and 0.877 save percentage in 41 appearances for the Red Dragons from 1991-95.