The University of Michigan Wolverines host the Michigan State Spartans in “the Big House” for a game tonight between the two in-state rivals. Just the 13th time U of M has played under the lights at Michigan Stadium. Michigan comes into the contest undefeated at 7-0 and leading the Big Ten East Division with Ohio State. 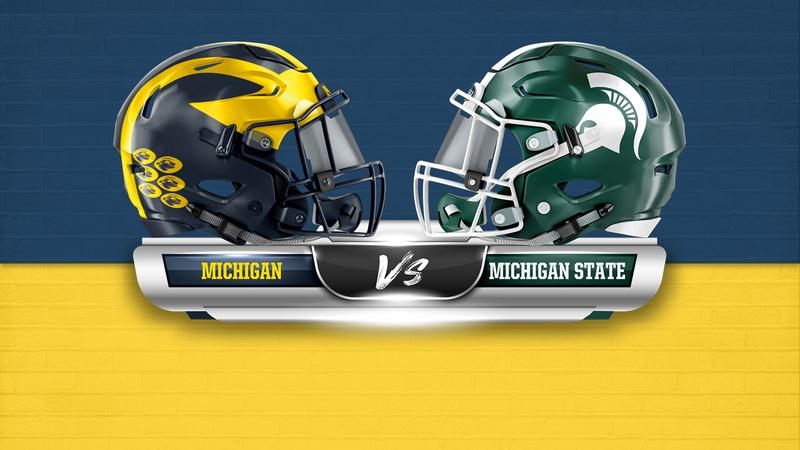 The Wolverines ranked fourth in the country, look to keep pace with the second-ranked Buckeyes. Both teams anticipating their end-of-season matchup, on November 26th, in Columbus, Ohio. Everyone expects the winner of that game to move forward to the Big Ten Championship and claim a spot in the College Football Playoffs.

Michigan State enters tonight’s game with a different goal. The Spartans are 3-4 on the year and fighting for enough wins to earn a College Bowl Invitation. A loss to Michigan is going to leave little room for error the remainder of the season if they hope to spend the holidays prepping for an extra game in December.

In a lackluster first quarter, Xavier Henderson from MSU stripped the ball from Michigan’s Cornelius Johnson to kill one drive. Another ended with a 22-yard field goal by Jake Moody. The Spartans took the lead late in the opening period with a 26-yard touchdown pass from Payton Thorne to Keon Coleman.

Michigan answered with an eight-play, 80-yard drive that culminated with a  two-yard shovel pass from J.J. McCarthy to Blake Corum for a TD to make it 10-7.

The Spartans drove down inside the Michigan 10-yard line but were stopped on a fourth-and-one run into the middle of the line that went nowhere. The Wolverines looked like they were ready to open up the scoring advantage as they put together a 15-play drive burning up minutes and yardage just before the half.

However, it stalled at the MSU seven-yard line, and Michigan settled for another Moody field goal. This time from 25-yards. Allowing Michigan State to stay close after two-quarters of play with a halftime score of 13-7.

Michigan took the second-half kickoff and again drove deep into Spartan territory. But had to settle for another field goal. Moody’s 39-yard kick built the lead to 16-7.

An MSU three and out, followed by a 40-yard punt, left Michigan in a position to break the game open if they could find the endzone. Nine plays later, Moody’s fourth field goal of the night from 33-yards out made it 19-7.

The failure of Michigan to convert when in the red zone is allowing Michigan State to hang around. Had Coach Tucker opted to take the field goal instead of going for it on fourth down deep in Michigan territory, the score could be even closer.

After their second consecutive three-and-out, the Spartans avoided complete disaster when the ball almost sailed over the punters head on fourth down. A one-handed save allowed Bryce Baringer to get the kick away. His punt of only 34-yards allowed the Wolverines to begin their next drive at their own 37-yard-line instead of deeper in their own end of the field.

A short Wolverine drive set up Moody with a chance at a career-long 54-yard field goal. Which he knocked through the center of the uprights. Now with the score 22-7, the Spartan’s hopes for an upset grew dim. At the beginning of the fourth quarter, Michigan held a two-to-one edge in time of possession.

Things only got worse for MSU. Another three-and-out. Another high snap on the punt attempt. This one Baringer could not control, giving Michigan possession at the Spartan eight-yard line. Two plays later, Blake Corum easily scores the TD, and Michigan goes up 29-7.

Erik Jones Delights Fans in a Visit to His Hometown of...